Blue skies, sunshine and tulips blossomed along Park Avenue in Manhattan this past weekend while the third edition of the Art and Antique Dealers League of America spring show took place at the venerable and historic Armory.


This month in particular is heating up as auctions, art fairs and gallery openings keep the energy level at an all fever pitch. At the Spring Antiques Show, the aisles were filled with a multitude of fine and decorative art dealers whose booths were brimming with high-quality collections and one-of-a-kind finds to appeal to the budgets of neophytes and seasoned collectors. As the show continues to expand, this year more than 50 international and local galleries and dealers showed off their prized furniture, objets d'art, jewelry, ceramics and paintings ranging from antiquities to contemporary. And if seeing fine antiques wasn’t enough, a series of show tours, led by experts in various fields, included a spirited fine art walk-around with Peter Trippi, Editor in Chief of Fine Art Connoisseur magazine. 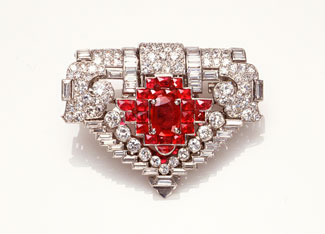 Rather than focus on the traditional fine arts, antiques and furniture, we took the exhibitor list and started our ramble seeking sterling silver, jewelry and antiques dealers, some of whom are from Connecticut, before we visited some of the stalwart dealers at the show who continue to exhibit and express their support for this newcomer show.

Silver collectors seeking modernity can't help but be enthralled with the house of Crawford, which is all about striking visual design coupled with fun, practical use. Based in Connecticut, every one of Crawford's unique pieces is painstakingly made by hand by master craftsmen, ranging from silversmiths to artists, modelers, chasers and casters. The process starts with a simple sketch combined with technical drawings, passes to models in clay, followed by several draft prototypes until the item is actually tested in real surroundings. With an output of around 50 brand new silver designs each year, ranging from tabletop to jewelry, Crawford really defines contemporary silver. Using only handmade techniques at the workbench that have not changed in three hundred years. 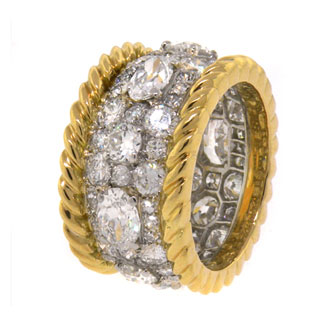 Estate jeweler Lawrence Jeffrey, owned by Sandra and Jeff Russak, is in Litchfield. Another esteemed and venerable purveyor of antique jewelry and estate jewelry for more than 20 years, residents of Litchfield and weekend visitors to the region have marveled at the collection of unique pieces that the owners continue to offer at the boutique. While most jewelry dealers stick with estate jewelry, Lawrence Jeffrey prides itself on offering estate and signed jewelry, in addition to antique jewelry. Antique jewelry includes pieces from the mid-1700s to the early 1900s. Yes, antique jewelry must be at least a century old, as well as illustrate a stylistic relevance to the fashion needs of modern women. For example, this period Art Deco ring (circa 1920-30) is a rare example of famed Place Vendome jeweler Mauboussin's famous "Mystery Ring" in which an optical illusion makes the ring appear to undulate when worn by the wearer.

Clinton Howell, one of the exhibitors and the President of the Art and Antiques Dealers League of America, grew up in Fairfield County, but after graduating from college, he decided he wanted to work with his hands. In 1971 he moved to England and enrolled in the London College of Furniture. "I was not a great cabinetmaker and I couldn't stand the sound of machines," he remembers, "so I took to finishing." His teachers in the college's restoration department were mostly working-class craftsmen who introduced Howell not only to the properties of shellac, but to the beauty and value of English furniture from its golden age. He is considered an expert on different timbers and their uses in different periods. Slowly, he began to identify wood from remote parts of the Empire and he could spot an Anglo-Indian table labeled English and know by the wood that it was produced in India. Among the rare finds in his booth were antiques such as the pair of mahogany window benches (below), in the style of Hepplewhite. 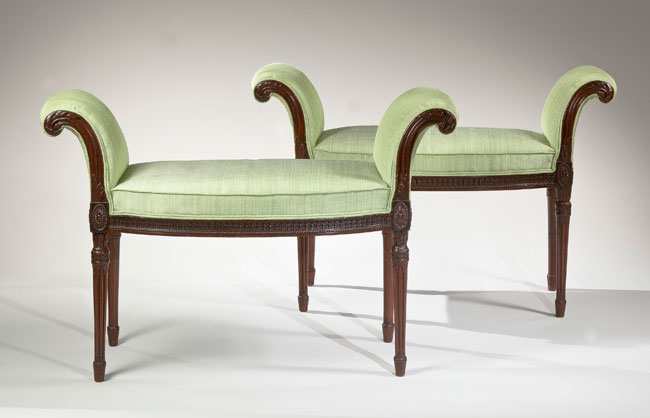 Some of the new exhibitors at the show who came from Europe were Marco Bertoli from Modena, Italy (19th-century Italian painting), as well as London-based galleries Gladwell & Patterson, (English and European 19th- and 20th-century paintings). Others included Sue Brown (jewels from ancient Roman through the 1940s), Stern Pissarro Gallery (artworks by multiple generations of the Pissarro family, 19th and 20th century European paintings) and the William Weston Gallery (Modern European and British Master prints).