A taste of Downton Abbey right here in Litchfield County 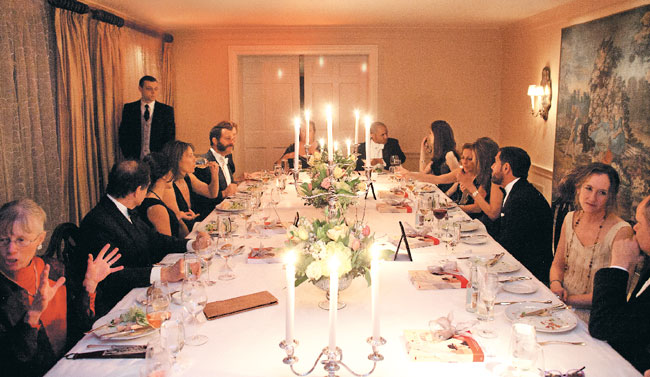 Perhaps the stars were aligned, or it was wishful thinking for an early spring, but there couldn’t have been a more felicitous occasion for the first annual Downton Abbey dinner at the Mayflower Inn.

We had all the right ingredients—a motivated group of Downton Abbey devotees, a grand country inn, and a dinner menu and décor inspired by the hit Masterpiece sensation on PBS. Guests were greeted by a retinue of Mayflower staff clad in white waistcoats and black tie. No doubt Mr. Carson would have approved of the well-dressed waiters. The evening began with guests milling about the main gallery, sipping the Lady Sybil cocktail (a combination of gin, St. Germain and Champagne), and displaying their Edwardian creations—men came in black and white tie, some with top hats; one reveler even donned an “imperial beard” created specially for the occasion. The ladies were stunning in vintage dresses embellished with sequins, embroidery and stones. I’m sure even the resolutely English Dowager Countess of Grantham would have been impressed.

Dinner was served under silver candelabra and the menu included poached salmon, Hereford beef and Mrs. Patmore’s treacle pudding, which was one of the best things I’ve ever eaten. Instead of the usual melodrama of dinner at the Crawleys, this dinner was filled with games inspired by the series, a convivial talk by Kathy Root on Edwardian etiquette, and I spent a few minutes discussing Edwardian design and the fabulous and storied Highclere Castle, where the fictional Crawley family resides.

While doing some research for the evening, I couldn’t help thinking about the points of resemblance…and difference between that great time and today, 100 years later: the dawning of a new age and with it new attitudes toward life. Even people’s views toward style and design were changing after the restraint of the Victorian era, as we are now seeing at the beginning of the 21st century. There was, for the first time, modern design, and the mixing of styles and periods—no single approach, but instead many styles that would influence the next 100 years.

For some of us, the dinner ended with more cocktails and aged port in the Mayflower’s taproom, where we discussed ideas for the next dinner: Great Gatsby perhaps?