A Traditional Arts & Crafts Home Gets a Modern Makeover 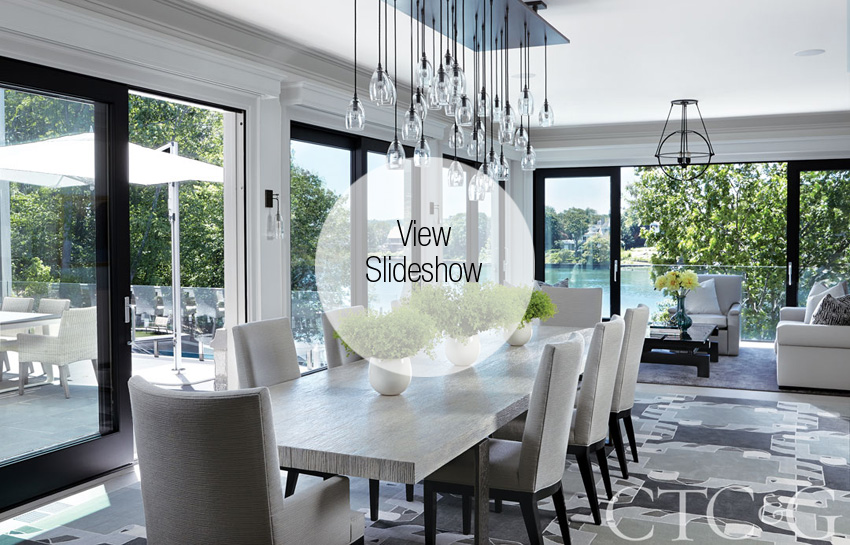 When longtime clients purchased an Arts & Crafts home with tons of period details that had also had an addition tacked on (not to mention glorious water views), HB Home’s Robin Liotta was tasked with marrying the old with the new. “I wanted it to be modern and hip but respect the vintage. The challenge was to make it flow and make sense,” explains Liotta. Adds the homeowner, “Our last house was quite modern, and this one is more traditional. I wanted to use the pieces we had bought together for the last house. Since this one is bigger, we had a lot of room to mix in new items and work on changing the tone. The old part of the house is spectacular and the new addition was well done. We wanted to pay attention to the old parts of the house while branching out and adding more modern pieces.”

Both designer and homeowner were taken with the pale, waxed oak floors that run throughout. “We were very inspired by those floors,” says Liotta. “They have an almost chalky look and, in this area of Connecticut, you do not see this often. From there, we started to think about doing things more neutral—very quiet and not much pattern. Almost looking kind of northern European.” The tonal dining room hints at a Belgian influence with linen slipcovered dining chairs, a neutral geometric rug and embroidered curtain panels. Liotta hung a caged chandelier that injects a more modern feel while also relating to the original Gothic lanterns on the front of the house and the funky iron table base in the living room. “The dark pieces throughout have such a nice contrast with the pale floors and the beams and the walls,” says Liotta. “The play of dark and light was really important to the story of the house. It has a graphic quality to it that is not overpowering.”

If the play on light and dark created subtle tension, it was Liotta’s choice of lighting and floor coverings that gave the house’s traditional bones and neutral palette a jolt of modernity while never distracting from the outside views. “It was my intention to not do anything that took away from the view—from every room it is spectacular,” notes the homeowner. “Robin has the ability to really understand someone’s tastes and design limits, but also knows when to push you gently into something more daring than you would do on your own.” In the expansive great room, a custom undyed geometric rug adds visual pop. A custom Gregorius Pineo rift-oak-topped dining table with an iron base plus an Alison Berger Glassworks chandelier above speak to the room’s contemporary edge. A kid-friendly Kravet textile covers the upholstery in the seating area. “I never want anything that is too precious,” explains the homeowner. “No room is off limits to my grandchildren. That’s not the way we live.”

Like most design, it’s the element of surprise that elevates mediocre to great. Liotta decked out the formal powder room with a graphic China Seas grasscloth, a metallic window treatment and a rope mirror that she describes as “nautical meets modern sculpture.” In the grandkids’ space, an oversize dotted wallpaper covers the walls, and the light fixture is a whimsical hand-knitted piece by a U.K. artist. “With so much neutral, it is important to have a few surprises as you walk around,” says the homeowner. Notes Liotta, “Pops of crazy add interest and excitement without being in your face. The whole house is very grounded and earthy, but very chic. She [the homeowner] is not fussy with anything she does; she keeps it simple and classic in a quiet way, just like this house.”

A version of this article appeared in the October 2016 issue of CTC&G (Connecticut Cottages & Gardens) with the headline: Custom Blend.