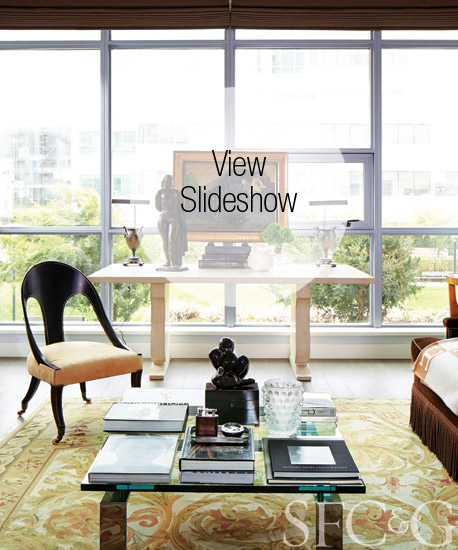 For Stephen Brady, executive vice president of Creative Services for Gap Inc., home truly is a style statement. With a celebrated career in fashion and décor—including leading roles at Ralph Lauren Home and Williams-Sonoma—Brady is known for crafting iconic retail spaces and destination restaurants (including San Francisco’s debonair Spruce). And while his two-bedroom, park-view Mission Bay condominium certainly has more than a dash of haberdashery—a dressing area in chocolate brown and furniture clad in menswear fabrics—Brady’s artful appointments also tell the story of a global traveler.

“I’ve spent so much time living and shopping in New York and San Francisco, visiting the Paris flea markets and traveling throughout Asia,” says Brady. “Wherever I live, I can look at the objects I have collected, and they tell the story of my life.”

In his home, Brady, who grew up in a “traditional classical environment” in Washington, D.C., showcases pieces that speak to his international élan: A midcentury Jean-Charles Moreux limestone library table; a Biedermeier-style secretary; French Deco armchairs; and dining chairs from the Paris flea market, take pride of place. “Designing a home in one style is not motivating to me,” he notes. “I am more interested in how eclectic elements work together with something that’s a bit of a surprise.”

One such example is a lacquered 19th-century chinoiserie cabinet from Circa that Brady transformed into a smart bar, complete with a mirrored and illuminated interior. Other Asian accents—his grandmother’s suite of antique Chinese porcelain vessels and a set of hand-carved Japanese calligraphy brush-holders—enliven the 1,800-square-foot apartment. These pieces keep company with a cosmopolitan collection of objects including an English tea caddy with ebony handles, inkwells, crystal match strikes, black Jasperware and antique tortoiseshell snuffboxes.

Brady’s art collection is equally international, and includes French bronzes from the 1930s and ’40s; a drawing by the Parisian artist François Bard (whose chic work Brady also showcased at Spruce); a figurative piece, Enjoy Freedom, by contemporary Milanese artist Paolo Troilo; and a drawing by Jean Cocteau. In his bedroom, Brady created a European salon-style grouping with figurative charcoals, pencil sketches and oil paintings collected on his travels to Paris, Rome, Milan, and beyond. “There’s a thread that runs through everything,” he explains. “I am continually drawn to the way artists express the human form.”

He is also a passionate collector of photography, and owns landscapes by Erica Lennard, figure studies by Victor Skrebneski and an Angus McBean portrait of a teenage Audrey Hepburn. He also offers high praise for fashion photographer Horst P. Horst. Brady not only has his classic 1939 image of a woman in a Mainbocher corset and a portrait of Katharine Hepburn, but also bought a chair at auction that used to sit by Horst’s fireplace. “That was an insane purchase,” he admits, “but I have such a fondness for his abilities.”

Instead of displaying them in a classical interior, Brady gave his provenanced possessions a streamlined backdrop in a new glass-and-steel apartment designed by Perkins & Will. “I love the juxtaposition of the contemporary architecture with my furniture and art,” says Brady. “It’s so clean lined that these pieces stand out much more than they would in a traditional environment.”

He was also attracted to the space’s gray French-oak flooring, 14-foot ceilings and park-view windows. “It has a very European sensibility,,” says Brady. “It truly transports you to another time and place.”

A version of this article appeared in the October/November 2014 issue of San Francisco & Gardens with the headline: Collective Evolution.