A tour of Scotland aboard the elegant Royal Scotsman—the Orient Express train, allowed its passengers to take in the countryside while watching sheep-dotted meadows and sipping on afternoon tea and cocktails. 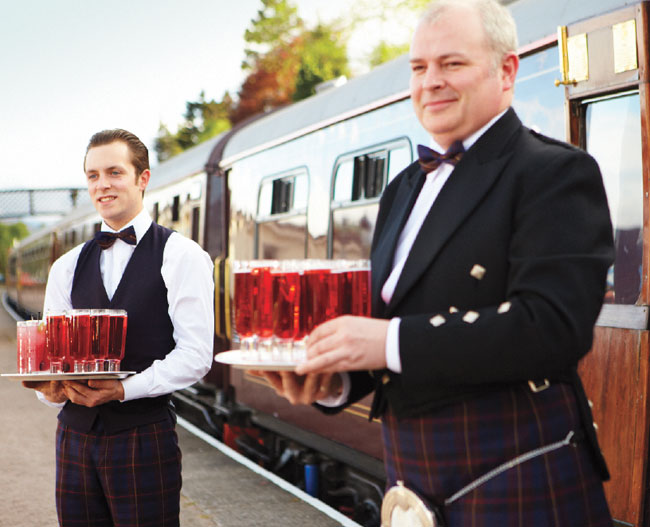 Bagpipes, kilts, tartans, Scotch and shortbread cookies are icons of Scotland. And the country’s charming towns and landscapes—toured in person or framed in a train window—have an irresistible allure that’s uniquely Scottish as well.

At Edinburgh’s vibrant Waverley Station recently, a kilted bagpiper escorted our group onto the elegant Royal Scotsman—the Orient Express train that tours the countryside with activities en route. Our compact staterooms were fitted with twin beds, mahogany desks, fresh flowers, en suite bathrooms, heated towel racks and generous showers. We spent most of our time, however, in the comfortable reception car watching sheep-dotted meadows roll by while the courteous crew served formal afternoon teas and cocktails.

After sleeping under cozy duvets, we rose for a hearty breakfast and boarded a bus to Rothiemurchus, where activity options included fly fishing, clay pigeon shooting and hiking through the Caledonian forest before gathering in the lodge for tea and a greeting from Philippa Grant, the lady of the manor.

Welcomed back to the train with glasses of Tia Maria and coffee, we rolled off to see the Culloden battlefield with a kilt-clad guide who pointed out the doomed strategy that cost Bonnie Prince Charlie his chance at the crown. Then we visited Strathisla where Chivas Regal is distilled. The final night aboard, we all dressed for dinner as the train sped toward Dundee. We bid farewell to the Royal Scotsman the next day in Edinburgh.

Continuing on our own, we were driven to Cameron House, a baronial hotel perched on the bonnie bank of Loch Lomond. We cruised on the loch, took part in a falconry demonstration, swam in the heated pool and sipped “kilt-raiser” cocktails before a dinner of local Highland beef and four versions of smoked salmon.

Our last stop was the Isle of Eriska, a stone manor house with one-of-a-kind rooms (mine had its own Juliet balcony in the turret), plus a spa, clay pigeon shooting, and a lovely nine-hole golf course stretching along the loch. Motoring back through the mountains to fly home, we looked forward to a return trip and new days of “auld lang syne.” 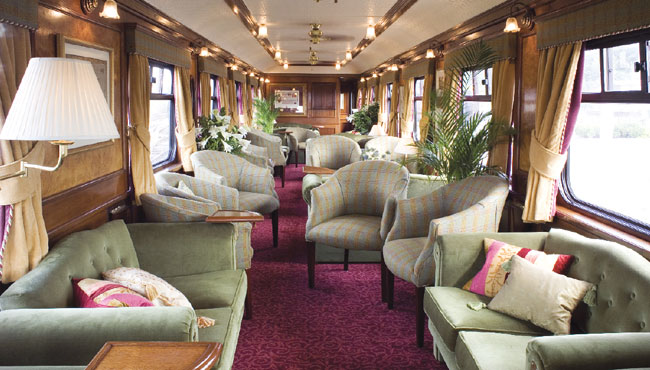 Michael Andrews has been the general manager of the Royal Scotsman, overseeing train operations for more than a decade.

How is managing the Royal Scotsman different from managing hotels and cruises? I think it’s the movement and size of the operation—the planning that goes into it—and the organization, because you are working away from home base.

What’s the biggest challenge of working on the train? You are tied to the rail schedules. And if there’s blockage on the line or a signal failure, you have to cope. But you always get to your destination.

How do you choose your staff? I always look for two things: common sense and personality. You can show people how to clean and serve, and teach them the aspects of fine wine and whiskey, butthe other two can’t be taught.

What’s your favorite type of guest? I don’t have favorites, but I like people who love the train and are open to new experiences—whether it’s trying haggis or sampling different kinds of whiskey—people who are here for the joy of Scotland. With a capacity of 36, we get to know all of the guests well and enjoy seeing to their comfort.

What’s the best way to keep your balance on the train? It’s like my ski instructor told me, you have to bend your knees and tuck in your bum. By flexing your knees, you have your own natural shock absorber and can roll with the movement of the train.

What is the appeal of train travel? What I like most is looking out at the scenery, that changing view from my office window. But the best thing I love about the train is the train.

1. Choosing Jura as my favorite of the 50-plus brands of Scotch served gratis aboard the Royal Scotsman. royalscotsman.com
2. Peering over the hedge to see J.K. Rowling’s house (which recently sold for more than $3.6 million after only three weeks on the market) on the outskirts of Edinburgh.
3. Catching Auden the hawk as he swooped down over Loch Lomond to perch on my wrist while falconing at Cameron House. cameronhouse.co.uk