A Verdant Outdoor Oasis on the Connecticut Shoreline 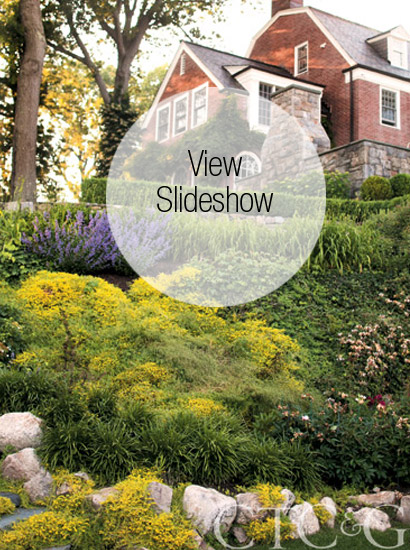 Fabulous view? Check. Classic house? Check. Great landscape? Wait a minute. This brick Georgian Revival house on the Connecticut shoreline met many of the needs for a young family on their return to the U.S. from a work sojourn in London, but the property itself was less than desirable. Difficult might even describe it better. “There were no real play areas for the children, for example,” explains Kathryn Herman, a principal at Greenwich-based Doyle Herman Design Associates. “The site itself is a rocky ledge with several outcroppings, and it is in a wetlands area, so we had to deal with the rules and regulations governing these wetlands.”

Certainly a challenging situation, but one that Herman and her team, including project landscape architect Elizabeth Gonzalez-Guillot, handled with much aplomb. Terraces for entertaining were certainly in order, as was much clearing and replanting of existing plant material, plus major improvements to the driveway and entrance to the home.

The terraces were the real genesis of the project, according to Herman. The couple had fallen in love with a wonderful outdoor dining table and seating from Munder-Skiles, whose owner John Danzer had recommended Doyle Herman for the project. But there was no proper place for it. So out came the T-squares, and three terraces were designed along the back of the house, each with its own personality.

The kitchen terrace for informal dining is nestled into the stone ledge and features a water trough imported from England. The middle terrace, perfectly aligned with the center of the house, holds the aforementioned Munder-Skiles dining table; and the casual seating/outdoor cooking terrace anchors the other end. Garden beds along the rear façade separate the terraces and house a selection of perennials and bulbs, including alliums and sedums that provide color throughout the summer. “And the lime trees in Belgian pots on the main terrace serve to softly demarcate the space,” adds Gonzalez-Guillot.

Little did the children of the family know they were designing, too. In much the same way that footpaths and cow trails helped form roads in the Northeast, Herman and her team used a path that the children had created up a rocky hill to establish a formal stone staircase. Now, instead of a dirt trail, a rough stone staircase edged in evergreen ferns and groundcovers ascends to the highest point on the property and stellar views across the Sound.

Tackling the entrance to the property meant finding a way to reconcile two competing driveways—one to the garage cut though a dramatic rock outcropping, and the other was overgrown and barely noticeable. Trees and shrubs were moved and re-arranged to open up the main approach. Reclaimed granite hitching posts with the original rings were placed to the left and right of the driveway and now clearly mark the entrance. “What’s challenging about this property is that you never can see the house properly,” says Herman. “The driveway is too close to the house, but we couldn’t really move it. So we embedded a bluestone oval inlay into the asphalt as a signal to drivers that they have arrived at the front door. “

Remarkably, the landscape hasn’t been overwhelmed by such an involved design. In fact, many fanciful, even romantic elements remain. The climbing hydrangea on the upright oak at the front of the house is one such moment. And the reuse of so much plant material helped create a sense of permanence, while the local wildlife—including deer, rabbits and chipmunks—traipse through creating an idyllic Eden on the Connecticut shoreline.

A version of this article appeared in the May 2015 issue of Connecticut Cottages & Gardens with the headline: One Step at a Time.