After 30 years in the same apartment, a couple makes it sparkle anew

With their daughters grown, Karen and Aaron Diamond had toyed for years with the idea of moving. “We’d been here for almost 35 years,” Karen Diamond says of their three-bedroom apartment in a 1927 building on Riverside Drive. 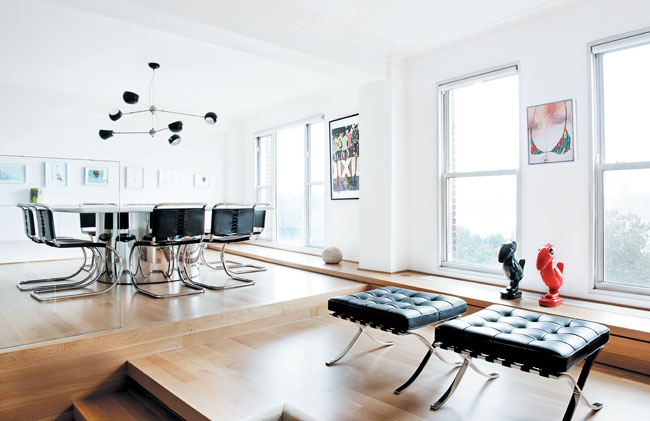 Level Minded
Two Barcelona stools from Knoll perch on the lower level of a raised wooden platform, which was installed to take advantage of the Hudson River views. Mies van der Rohe dining chairs circle a custom steel and marble-top table, centered beneath a David Weeks Oval Boi chandelier from Ralph Pucci. The bird statues are by Yoko Inoue.

With their daughters grown, Karen and Aaron
Diamond had toyed for years with the idea of moving. “We’d been here for almost 35 years,” Karen Diamond says of their three-bedroom apartment in a 1927 building on Riverside Drive. “But we’ve always loved the Upper West Side, and why leave
something we loved? So we stayed.”

The couple decided that a renovation was in order—one that would retain the apartment’s openness while providing a studio for Karen, an artist who works at home. The Diamonds turned to Kathy Ogawa and Gilles Depardon, whose interdisciplinary SoHo firm, Ogawa/Depardon Architects, is known for its refined modern interiors and soup-to-nuts approach. “We like things to be simple and clean,” says Depardon. “But a home has to have life. It has to have feeling.” 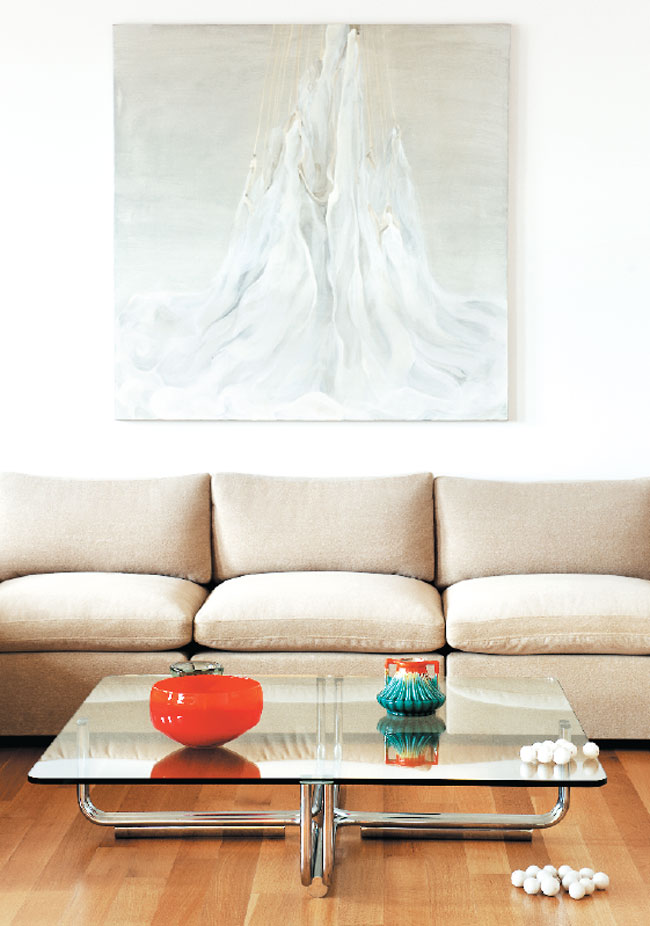 Light And Airy
The custom sectional sofa in the living room (this page) is covered in a Rogers & Goffigon fabric. The painting is by Susan Seaborg.

One of the designers’ first tasks was to maximize the vista of Riverside Park and the Hudson River below. The solution? A platform that raised the dining room and seating area almost two feet off the ground, so that the windows appear practically floor-to-ceiling. “It gives a different perspective on the park,” says Diamond.

The new floor plan also includes a gallery-like space for Diamond to hang her work and that of her two daughters, who are both artists. A photograph by Stephanie Diamond of three children—one of whom is Diamond’s granddaughter—hangs in the minimal kitchen, where a large four-panel glass door can be closed when the couple is entertaining. More often than not, though, it is left open: “Karen is very much into cooking, so she wanted the kitchen to be part of her apartment, not just tucked away,” says Depardon.

While the kitchen favors function over style, the living area offers some surprising touches, such as a round dining table with a reflective base and a sculptural David Weeks chandelier, which Diamond found at Ralph Pucci. “Even though the apartment is really spare and modern, Karen has a whimsical side,” says Ogawa. “She has a great eye.” Thanks to the neutral palette, Diamond can also afford to experiment with color while keeping things under control. A configuration of five rainbow-colored stools in the hallway, for example, is ready to roll: They’re equipped with wheels. “My grandkids love them,” says Diamond. 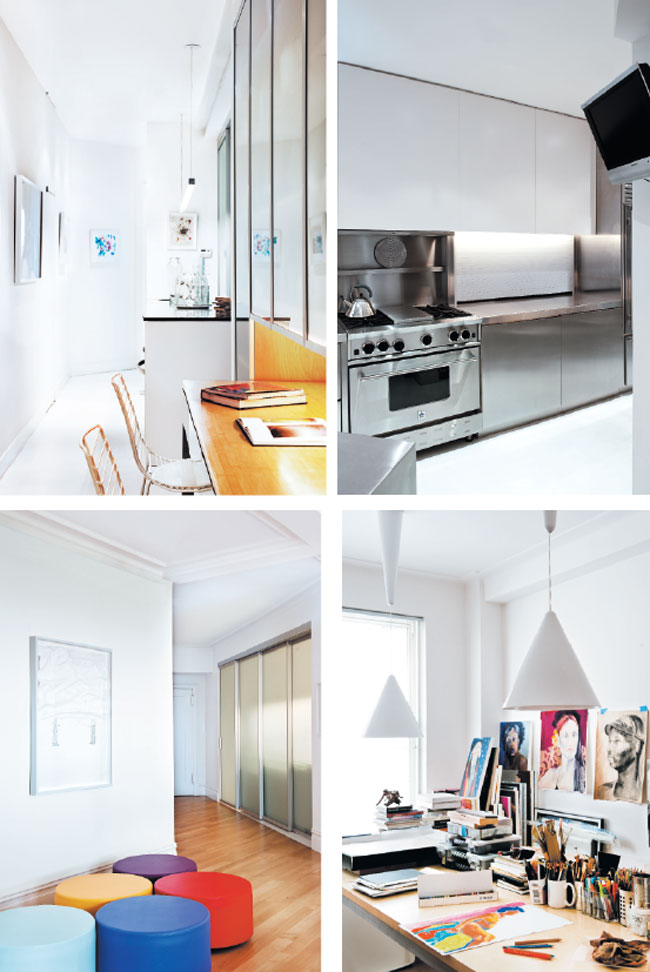 Light And Airy
Stackable Leaf chairs from Suite NY tuck under a custom bamboo counter in the kitchen, which is kitted out with stainless-steel appliances, including a BlueStar stove. Glass cabinet doors from Häfele (bottom left) close off the kitchen from the rest of the apartment; the bright poufs in the entry hall are from Domodinamica. (bottom right) Cone-shaped pendants by Flos hang among pastel portraits by Karen Diamond in her studio.

Color plays a bigger role in Diamond’s studio, where, in collaboration with Ogawa and Depardon, she crafted a light-filled workspace (formerly a daughter’s bedroom) with built-in cabinets and geometric pendant lights. “My artwork is on the wall, and I can work or do research here,” Diamond says of her refuge.

Even in this familiar setting, though, change is inevitable—much like the world outside the apartment’s windows. “You can see the Soldiers’ and Sailors’ monument to the left and the George Washington Bridge to the right,” says Diamond. “There are lots of tugboats, barges, the Circle Line, the water taxi coming from New Jersey. The scene is always different. It’s wonderful.”