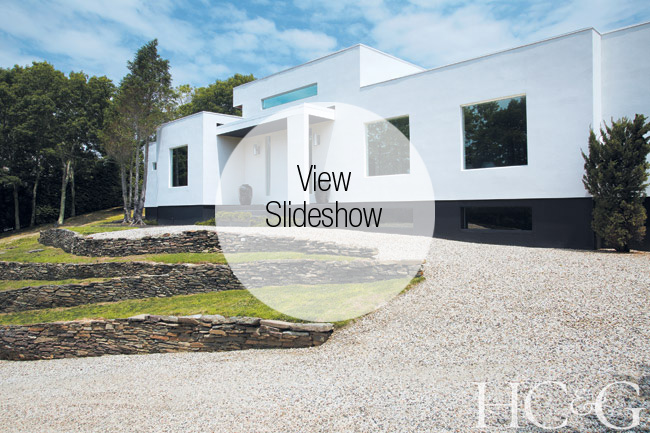 Some people collect baseball cards, and others vintage cars. Some even collect more offbeat objects, like moon rocks or Pez dispensers. Still others, like designer Wendy Seewagen, collect houses.

Seewagen has owned ten thus far, ranging from a ranch in Kings Point to a Gatsby-esque Georgian in Mill Neck to three apartments in the Majestic, on 72nd Street and Central Park West, to a spacious stucco home in Remsenburg. The decorator loves the adventure of reinventing a structure entirely, and thinks nothing of knocking down a wall or constructing a staircase from scratch. What’s more, she would rather do the work by herself. A chore? Not for her. “I know how to do so much—it’s just easy,” says the Nassau County native and mother of six sons. Painting the floors of an entire house and making rooms where there weren’t any before are merely routine tasks, as far as she’s concerned.

Seewagen currently lives in a rambling contemporary in the northern reaches of Water Mill, near the East End’s highest point. “When I saw this place, I had to have it,” she says of the former spec house, which is perched on a hill at the end of a cul-de-sac. “It wasn’t my taste, but I knew I could totally change it.” At 11,000 square feet, the structure was more than a little fixer-upper: It had six bedrooms, seven bathrooms, and huge open spaces—the ideal candidate for the Seewagen treatment. She bought the home, along with her partner, Ron Wall, and tore everything apart, whitewashed the interior, painted the floors black, and took off the doors to each room. Other than the shingled exterior, all other refinement was stripped away.

She then set about filling it with treasures: Over the years, Seewagen has bought and sold mid-20th-century furnishings and amassed a vast collection that would make modern dealers drool, including Mies van der Rohe Barcelona couches, a macassar ebony Dominique torchère, and a chrome and rosewood desk by Herman Miller, as well as a Marc Newson Orgone chaise longue for Cappellini and a John Dickinson African table. Incorporating artwork by one of her sons, Eric Slayton, and custom furniture by another, Doug Slayton, the house is a creative haven, spartan and surprising at every turn. If led into her living room blindfolded, an unwitting visitor might think he was standing in a wing at MoMA.

Artistically inclined herself, Seewagen has sculpted and painted—abstract works mostly—since she was a teenager and later became a reluctant but talented decorator, doing projects for her friends. “I always said no,” she says, “but one day I finally said yes.”

In early 2013, just as Seewagen had gotten her house “to the point where it was perfect,” the unthinkable happened: The house caught fire. It started in the chimney, where there was a defect in the metal flue. “It was corroded, and we had been making fires every day. It was wintertime, and it was cold. I walked out onto the deck to get more logs and heard a crackling from the roof.” The fire spread fast, although Wall and Seewagen acted quickly and managed to save some of the furnishings. “We grabbed what we could and threw it on the lawn,” Seewagen recalls, remembering their panic as they waited a good half hour for the firefighters to arrive. The top floor of the house was completely destroyed—save for, oddly, Seewagen’s closet, which emerged unscathed. The rest of the house was damaged, but not uninhabitable. Seewagen and Wall, along with their dog, Bo, were happy just to have made it out alive.

In her typically industrious manner, Seewagen immediately began restoring what had been her pride and joy. “My house is like my work of art,” she says, describing the days she spent on a stepladder ripping down walls and pulling up smoke-filled floorboards. “It was difficult to watch the workers throw my furniture into the Dumpster, and everything that survived the fire had to be restored—I did it by hand.” Ultimately, she chose not to rebuild the second floor and stuccoed white the now single-story, 5,500-square-foot home, a newly sleek oasis for the treasures that remained. “It’s essentially one big room, and there are very few doors—just on the bathrooms and two of the closets. What can I say? I am my house!”

A version of this article appeared in the September 2015 issue of Hamptons Cottages & Gardens with the headline: Contemporary Hero.