An 18-Century Farmhouse Gets a New Life in Picturesque Silvermine

Interior designer Lisa Hilderbrand and her husband tap into a 7,200 square-foot piece of history 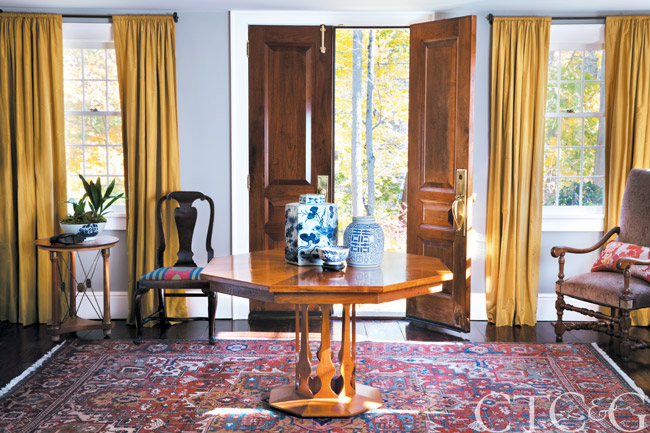 Since the late 17th century, historic Silvermine has morphed from a rural farming community into a coveted suburban neighborhood. It was in this quaint corner of Connecticut with its narrow winding roads meandering through thickly wooded homesteads that Lisa and Eric Hilderbrand set their hopes on finding a remodeling project. “It was 2001, and I was casually seeing what was on the market in the antique fixer-upper department,” says Lisa Hilderbrand of Welhil Interiors. “And there it was: 7,200 square feet, seven fireplaces, seven bedrooms, sleeping porches and a ballroom.”

The 18th-century farmhouse also had broken windows, big leaks in the roof, and was in shockingly bad condition. “I knew we had a big job ahead of us,” says Hilderbrand, who worked at Christie’s auction house before starting her own business. “But the house had so much character and personality, I just felt compelled to rescue it.”

Fearless and childless (two sons would come later), Hilderbrand did everything from replacing layers of linoleum with pine floors that she stained herself to taking a sledgehammer to the library ceiling to uncover hand-hewn beams. Then nine months into the project, the unthinkable happened. “We had a huge fire that could have taken the house if it wasn’t for the efforts of local firefighters,” she says. “Despite that setback, we recommitted, and a year later we were back.” 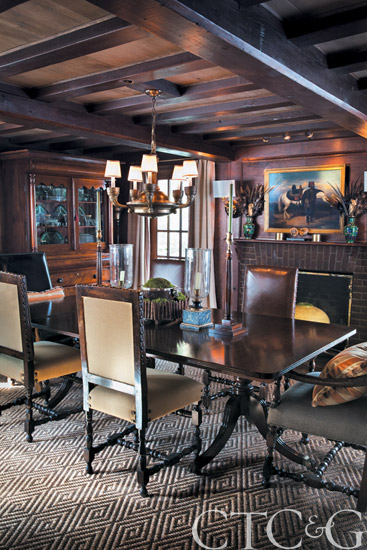 The renovation continued with the addition of mahogany French doors in the entry, filling in plaster around those now exposed library beams, and replacing the back hall floor with a herringbone brick until, at last, it was time for furnishings. “I had a decorating vision but no specific plan other than a rich neutral palette as backdrop for colorful rugs and textiles,” says Hilderbrand, who promptly headed to Christie’s. “I love buying things at auction and was thrilled to find a fabulous 19th-century Herviv carpet.”

The boldly patterned Persian defines one section of the 1,000-square-foot ballroom, so called because a previous owner modeled the room’s shell-carved niches after those in the ballroom at the Metropolitan Museum of Art. Favoring a layered look, Hilderbrand rounded out that end of the room with wingback chairs to add height and a 17th-century Italian table used as a bar topped by an 18th-century Dutch brass repoussé mirror. Elsewhere in the space, a 19th-century Regency mahogany library table piled high with brass boxes, intricately carved camels and Foo lion lamps makes a collecting statement. “I have a thing for lions,” says Hilderbrand, pointing to the outsized Foo lion sculpture standing guard in the back hall.

Since the arrival of their offspring, the ballroom has emerged as family central, but her favorite retreat is the library. “I fell in love with a green strie velvet and had a down sofa made from it. The rest of the room just fell into place around it,” says Hilderbrand, who added bookcases filled with books, antiques and decorative items. “I wanted it to be like a curiosity shop.” 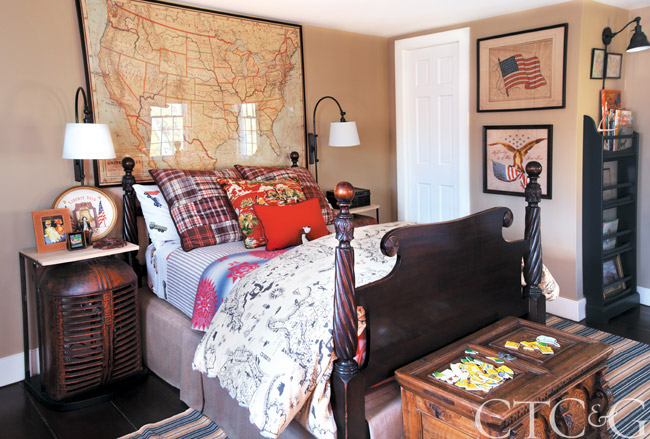 Her attraction to what she terms “the unique, well-worn and a little quirky” is evident everywhere from the tractor grills turned end tables in her son’s room to the eight-foot-long painting depicting a stag hunt with a centaur that holds a place of prominence in the ballroom. “I gravitate toward the road less traveled,” she says in response to the art selection.

While the domicile’s cozy ambience plays exceptionally well in winter, come summer the revived pavilion is the place to be. “I searched mountains of stone to find curved pieces for the mantel and hearth, as well as the two corbel supports,” says Hilderbrand, who sought old natural surfaces that blended with the existing wall so you’d never guess the entire fireplace was added the previous summer.

“Throughout the project, we felt like we were rescuing the house—from decay, from demolition,” she says. “I believe in good house karma, and we saved a beautiful piece of history in our picturesque neighborhood.”

A version of this article appeared in the April 2014 issue of Connecticut Cottages & Gardens with the headline: Rescue Mission.

This article appears in the April 2014 issue of CTC&G (Connecticut Cottages & Gardens).