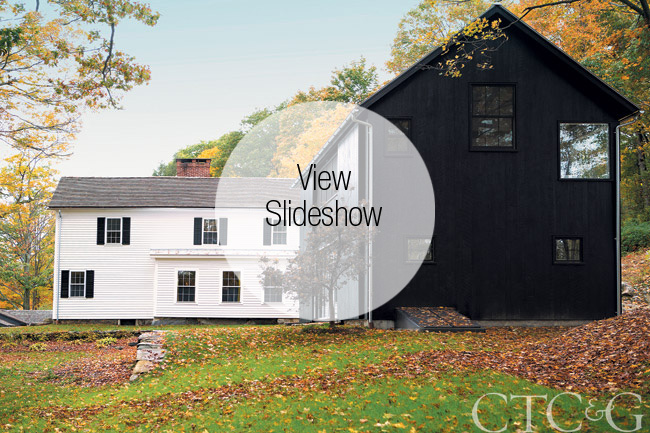 Badass New England is not the terminology normally associated with the design style for a home, especially one in Cornwall. But it is the oxymoron interior design Fawn Galli conjured when talking about the unlikely blend of antiques, contemporary furnishings, French textiles and a color scheme that boldly pairs salmon walls with eggplant wainscoting that breathed new life into an 1830s farmhouse. “The home is a cohesive mix of high and low, vintage and contemporary with a flash of color,” says Galli. “These elements came together to create a unique soulful experience.”

The creation of that experience began three years ago with a Manhattan couple seeking a getaway where they could relax with their three sons, and where the husband could relive childhood memories of summer visits to the tiny hamlet on the Housatonic River. In a bit of serendipity, they ended up purchasing the very home his family had once rented. According to architect Douglas Wright, the house was “charming but suffered from a lack of attention.” “The new owners wanted to maintain the feel of the original while bringing a modern sensibility,” he says.

From the outside, that meant refurbishing the white gabled farmhouse as needed—repointing chimneys, rebuilding shutters and so on, and on the interiors, maintaining the character of the original plaster and beams while rearranging rooms to open the house to the views. After adding a new porch, Wright introduced a black barn on the other side to replace an existing room that resembled a low-slung 1950s garage. “It had three roll-up doors and was used as a family hangout; a function the new owners wanted to continue,” says Wright, whose two-story version includes a place for entertaining and dining below and a master suite under the eaves above.

Unlike the more typical red barn, the architect drew inspiration from the French for his “giant modern black box.” “There’s a tradition of black barns in France where the east side is painted black to absorb the heat,” says Wright, who included giant windows and disappearing bifold doors that invite views of the river on one side and a newly exposed bedrock formation on the other.

For her part, Galli paired a bright red sofa and cobalt blue coffee table with an inherited Danish table and chairs in the open living area. “In the barn, the architecture and furniture is more contemporary than the farmhouse, and the master bedroom is an intentional expression of New England sparseness,” she says of the room’s lack of headboard, rugs and window treatments.

Coining another oxymoron, the designer claims the main house exemplifies a mix of “New England thrift with exuberance.” Bell jar lights from Home Depot in the entry and acid yellow kitchen cabinets readily make her point. Similarly in the dining room, where the walls are swathed in green, chairs from a nearby thrift shop surround an old family dining room table.

Another color explosion occurs in a long, narrow room located between the living room and mudroom where the deep orange couch cushions topped with pillows upholstered in French textiles collected by the homeowner play off the deep purple and salmon walls. “These colors seem a little shocking to some, but many period houses like the Franklin Pierce Homestead in New Hampshire used these kinds of color schemes,” says Wright, who selected the wall hues.

Things calm down in the living room where white walls serve as a backdrop for a pair of Danish chairs, a thrift shop coffee table and pillows wearing mismatched fabrics meant to create a collected look that feels like it’s been put together over generations. “It’s the balance of Old World and New, and the yellows, greens and reds that run through the house that are provocative and unexpected. There are New England underpinnings but it’s funky,” says Galli. “It’s all part of that cool factor.”

A version of this article appeared in the October 2015 issue of Connecticut Cottages & Gardens with the headline: Rustic Roots.