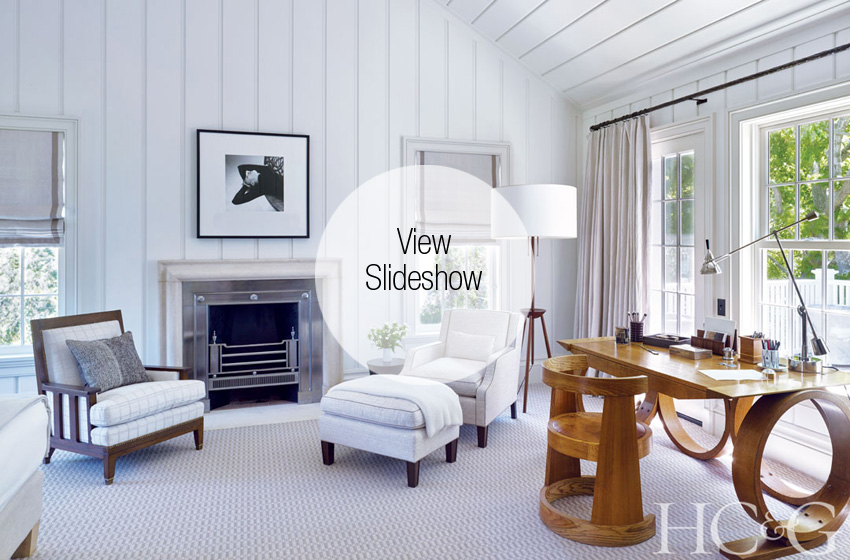 For Shaun Woodward, restoring a historic home in the Hamptons was the perfect opportunity to honor the past while plotting a new future. A former British politician and Member of Parliament—he was Secretary of State for Northern Ireland from 2007 to 2010—Woodward has enjoyed beautiful homes on Mustique, in the South of France, and in the English countryside, as well as in East Hampton. But the small former whaling village of Sag Harbor really captured his imagination. “For someone like me, who loves history and has a huge appreciation of architectural beauty,” Woodward says, “finding a house to restore in Sag Harbor was a dream.”

After a multiyear search, Woodward fortuitously happened to be walking down Suffolk Street one day when he spied a for sale “board,” as he describes it. “I had a sense that this extraordinarily beautiful 1840s Egyptian Revival house, which belonged to [playwright] Lanford Wilson, had originally been a sea captain’s home,” he recounts. “It was just where my heart and my head were.” It is thought that the original architect was Minard Lafever, who designed the Old Whaler’s Church and the Sag Harbor Whaling Museum, both of which bear similar Egyptian Revival detailing.

The house needed work, but Woodward was undaunted, having restored some wonderful homes in England, including Sarsden, in Oxfordshire, where his four children grew up. He promptly called on architect Martin Sosa of the Manhattan-based firm Arcologica, which had done the renovation of the housewares shop Monc XIII, on nearby Madison Street, and New York designer David Kleinberg, both a great friend and professional advisor. The mandate, Sosa recounts, “was to maintain and replicate the original detailing of the house and its unusual style.”

The design principals were also tasked with “thinking about how to restore the structure so that it would function for a 21st-century family,” says Woodward. “Since buying the house, my wife and I have separated, and I live there now with my partner, Luke Redgrave [a movie-industry cameraman who is the grandson of the actor Sir Michael Redgrave]. We moved in six months ago, and Luke and I have really made it a place we regard as home.”

The opportunity to buy an adjoining property around the corner allowed the duo to create something rare: a large compound in the heart of the village. To complement the five-bedroom, five-and-a-half-bath main house, they built a two-bedroom, two-bath guesthouse, connecting the structures with a shared private yard and a 50-foot gunite pool. Handily enough, the men even stayed in the guesthouse, which was finished first, while renovations were completed on the big house. “One of the wonderful things about it,” Woodward says, “is that you can be on your own or have 14 people over. Either way, it’s comfortable and a good use of space.” Though lacking the historic pedigree of the main house, the guesthouse is regal in its own right, featuring airy 20-foot ceilings in the drawing room and a small but exceedingly functional kitchen.

In designing the guesthouse, Sosa aimed for continuity with the main house, creating compatible exteriors with similar clapboard siding, trim, roofline, and window fenestration, in addition to interior flooring and tiles, achieving what Kleinberg terms “a mini-me of the other.” Tying the two structures together was done “brilliantly,” enthuses Woodward. “Both David and Martin were extremely sensitive to making a cohesive whole. Things [in the main house] were in poor condition, so everything we took out we had copied, including the molding, skirting, and plaster. We tried to do everything the way it would have been done 175 years ago.”

As for the main house, staying true to scale was paramount. The team shied away from the ever-popular contemporary open floor plan and retained most of the smaller rooms, such as the double parlors, library, and dining room, their elegance enhanced by high ceilings. “The most interesting choice we made concerned the scale of the kitchen,” Kleinberg says of the grand, step-down space that looks out on the back lawn. “Shaun wanted a really big kitchen because he and Luke like to cook, and there are always people sitting at the large table. When you walk through the house, you make the journey through all the traditionally proportioned rooms, and then arrive at the kitchen and just say, ‘Wow.’ Martin did a remarkable job.”

In addition to overseeing the decor, Kleinberg helped Woodward sort through pieces that lay in storage after the sale of his previous houses. “The best way to shop for home decor is by simply revisiting things you already own,” the decorator says. “Shaun has lots of opinions and a really good eye, so we would say, ‘Let’s try this here and put that there.’ We were open-minded to experimenting.”

A series of maps from Rudolf Nureyev’s Paris apartment, for instance, now hangs on a guest room wall, while Woodward’s collection of portraits by such talents as Richard Avedon, Irving Penn, and George Hoyningen-Huene spans the walls of the dining room. A set of pottery from Woodward’s ski chalet in France decorates the kitchen. Kleinberg reupholstered many preexisting seating pieces to mesh with the prevailing color scheme of light blues, creams, and browns. And he wasn’t afraid to mix these furnishings together, such as the vintage English Arts and Crafts armchair and the younger American armchair and ottoman in the master suite. “I always try to consider how various periods influence each other,” he says.

“David’s work feels like it has always been there,” adds Woodward, “and that’s what makes the place feel so comfortable. We produced this extraordinary compound in the middle of the village, and after all this time, it feels incredible for Luke and me to call it home.”

A version of this article appeared in the September/October 2016 issue of HC&G (Hamptons Cottages & Gardens) with the headline: American Classic.