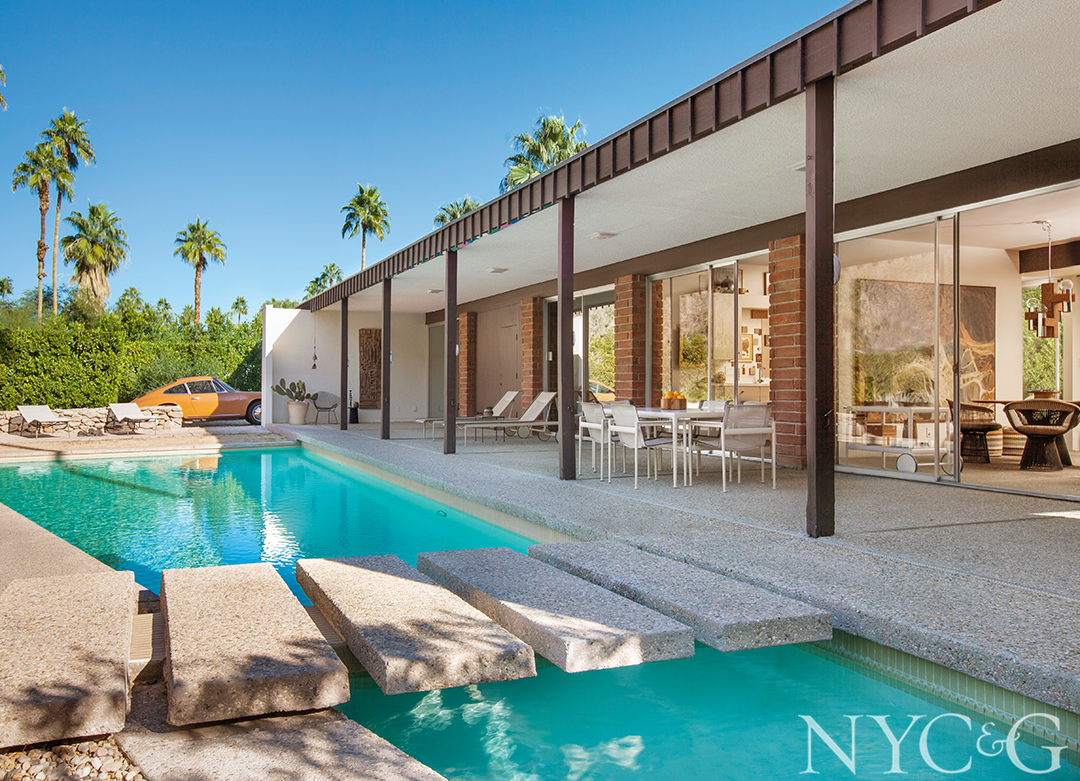 One Sunday afternoon, James Harlan and Tom Early were walking their dog in the Historic Tennis Club neighborhood near their condo just off the main drag of Palm Springs. They weren’t looking for a house, but a house, apparently, was looking for them. “We both loved it on sight,” says Harlan, a native Chicagoan who moved to California to study architecture at USC. “They had just reduced the price, so we called a friend who was a real estate agent, and by Tuesday we were in escrow.”

A small modernist gem by the little-known Long Beach–based architect Dean Davidson, the 1,600-square-foot three-bedroom home was built in 1965 and includes a front yard with a triangular pool that faces the San Jacinto Mountains. Looking somewhat like an updated ranchero, it couldn’t be simpler or more straightforward. “The house doesn’t even have a front door,” says Harlan, who once worked for the famed architect Frank Israel. “It’s just a glass slider.”

In fact, the house barely has walls, although it does have a deep front porch that runs the length of it, another feature that attracted the shade-loving Harlan, and floors made of pebbled concrete slabs separated by a grid of redwood dividers (they had previously been covered by carpet and Mexican pavers). “We got the agent to lift a corner of the carpet when we were looking at the house,” Harlan confesses. Another significant plus factor: The pass-through kitchen was original and did not need major work.

Not only is the house one of a kind, but it’s also the only one Davidson ever built in Palm Springs, a fact that was especially alluring to Harlan, a mid-20th-century design devotee who has lectured and published widely about California modernism. Harlan and Early split their time between here and an apartment in Pasadena, which is more convenient to Early’s work as an Emmy-winning art director for Days of Our Lives (he painted a lot of the canvases that hang in the house). Harlan, meanwhile, spends most of his time in Palm Springs, unless he’s working on a project in L.A. 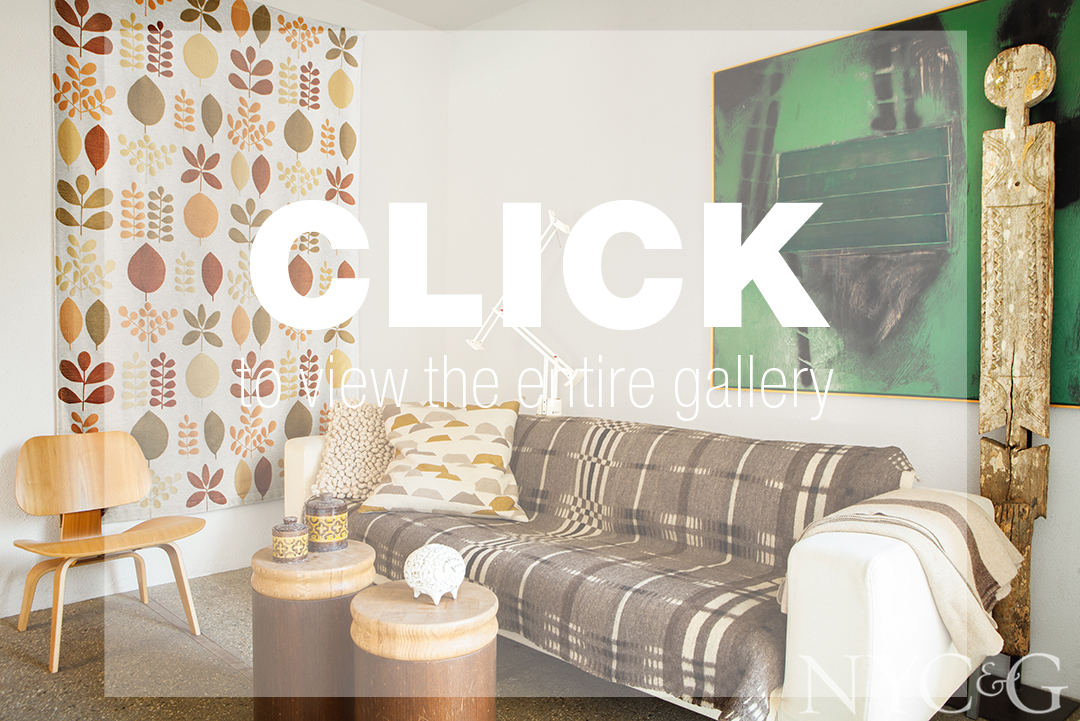 “I think it’s ahead of its time,” Harlan says of the house, with its concrete entry path that bridges the pool—highly unusual among the modernist Palm Springs homes built during the 1950s and ’60s. “For me, it has more of an early-’70s vibe to it.” Accordingly, the rooms have been furnished with pieces that “play to the architecture.” The result is more Big Sur self-actualization center than Rat Pack pool party, although there’s a rational asymmetry and some elegant decorating choices that elevate it above straight-up bohemianism.

“I think the first piece we bought was the vintage Warren Platner rosewood dining table,” says Harlan. Other furnishings that evoke the macramé and earthenware era are Togo sofas, designed by Michel Ducaroy for Ligne Roset in 1973, deeply textured Nate Berkus ottomans for Target, and a wood-and-chrome chandelier. Harlan ingeniously contrived the “sideboard” in the dining area from three Ikea kitchen cabinets designed to go above refrigerators.

Harlan and Early have both studied at Ghost Ranch in New Mexico, where Harlan took a class in glassmaking and began to craft jewelry. A converted mobile home, parked on an adjacent lot, now serves as his studio, surrounded by entirely appropriate dry-stack walls made of stone excavated on-site. He later started making large-format hanging pieces that he calls Rays, which fashion designer Trina Turk fell in love with during a local modernism tour. Now she sells them in her Palm Springs store.

Not only does the deceptively humble house suit its new owners, but so does the neighborhood. “You’d never know it when you’re here,” says Harlan, “but you’re right near downtown, so it’s very walkable. And there’s nothing that can be built that will ever block our view of the mountains from the front of the house. I have an office around the back, but I live at the table right by the pool.”

A version of this article appeared in the December/January 2017 issue of NYC&G (New York Cottages & Gardens) with the headline: Mod, Mod World.