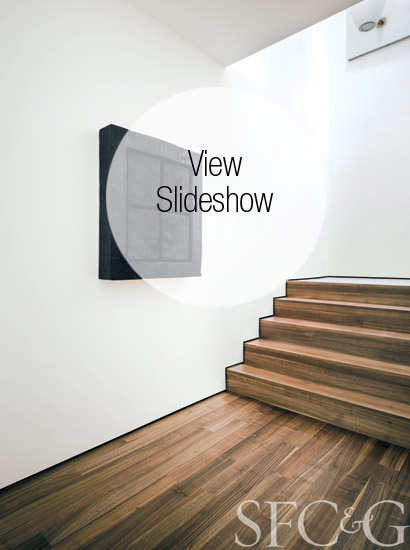 Cantilevered white planes, graphic shadows and pure Modernist lines distinguish the façade of a building that sits at a point where Cow Hollow juts out and overlooks Pacific Heights. “It was built in 1959, and it was, well, ugly,” says architect Julie Dowling, recalling her first impressions.

“I took it for an abandoned hotel! But I could see pleasing proportions beyond its multiple finishes and obscured balconies. So it was just a question of reducing it to a simple, sculptural form.” Now, after an extensive, 14-month renovation, Dowling lives in the two upper floors with her husband, art advisor Steven Platzman, and their daughter. The second floor accommodates a design studio for the bicoastal practice Dowling founded with her identical twin sister, Leslie, who is also an architect.

Judging by documents and mismatched timbers uncovered during the demolition phase, a 3,000-square-foot cottage at the back of the lot went up hastily in 1907, directly after the earthquake. In its current incarnation, it houses Platzman’s curatorial and advisory business, Addison Fine Arts. In addition to an office and library, Dowling carved out an all-white exhibition space with a customized hanging system integrated into the ceiling. “We each have our areas of expertise, but we’re symbiotic,” says Platzman. “Julie takes my opinions into account, and we choose art together. We’re aesthetic partners.”

After graduating from Princeton, Dowling worked with esteemed architect Michael Graves. But during a year she spent in Barcelona in architect Juan Navarro Baldeweg’s firm, she learned how to use light and space as design elements. Over time, they’ve become a leitmotif in all her minimalist, open-plan projects. That’s particularly true here where the entire shell is essentially comprised of two surfaces—warm white walls and rift-sawn walnut floors—and together they produce an expansive, seamless flow from room to room. Then there’s the well-edited inventory of B&B Italia sofas, hand-hewn tables and mid-century chairs with low silhouettes that make ceilings seem higher, celebrates unobstructed city views and lets artwork shine. “No matter what I place in here, it looks amazing,” says Platzman. “Whether it’s a 19th-century oil painting, a contemporary photograph or a pre-Columbian ceramic, its colors and textures remain true. Each piece has its own voice because it’s surrounded by silence. I could hang the subtlest, unframed drawing here, and it would have presence.”

Dowling agrees: “Nothing recedes or fades into the background here, and the smallest details beg to be appreciated. The structural character of these rooms tells you not to position any furniture too close to the walls. As a result, nothing feels static.” Spatially, there’s also inherent drama. The top-floor ceiling soars to 13 feet, and a wall of full-height glass panels turns views of the bay into a cinematic mural. Recessed skylights illuminate the double-height volume above the stairs that lead down to the third floor and highlight shifting perspectives throughout the day. The kitchen spans the building’s length and spreads out onto a balcony whenever 25-foot-long sliding glass doors retract. “Having this indoor–outdoor extension has entirely changed the way we cook and entertain,” says Dowling. “In fact, the whole property has changed the way we participate with the city. It’s an extroverted place to live in, but at the same time, it’s serene, uncomplicated and visually quiet. It’s all-around recuperative.”

A version of this article appeared in the October 2015 issue of San Francisco Cottages & Gardens with the headline: When Attitudes Become Form.