For this house, the winds of change began to blow more than two centuries ago. 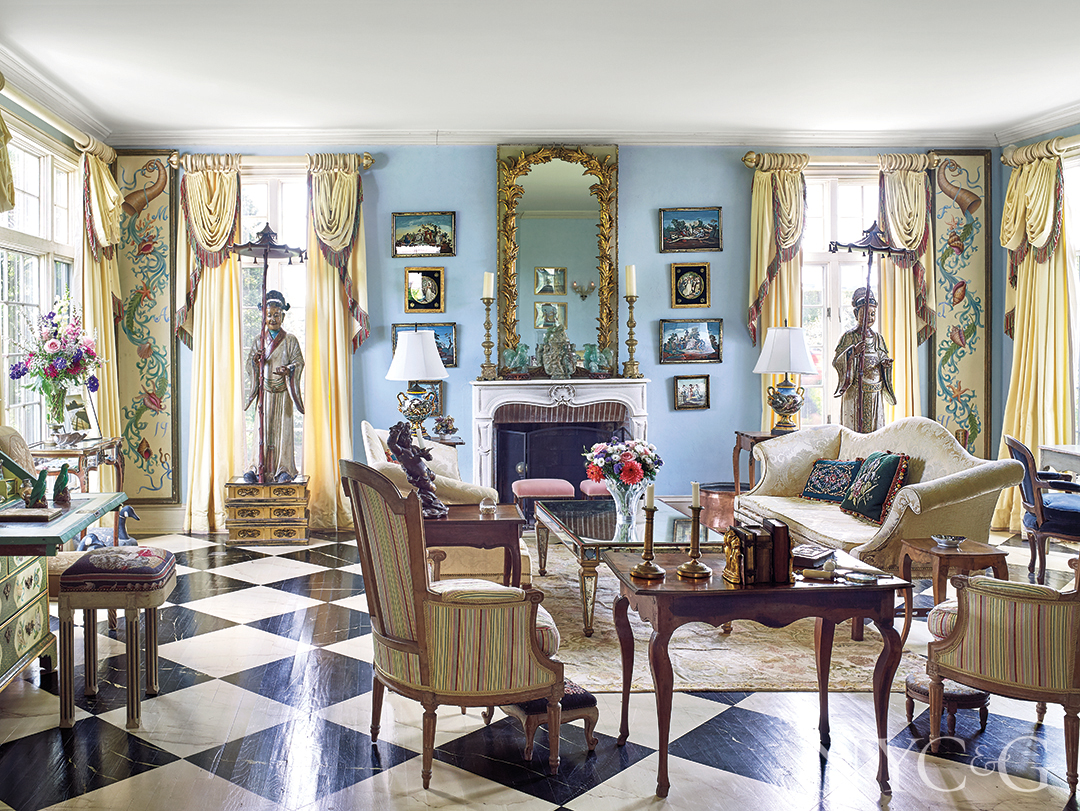 Long before whooshing helicopter blades could be heard buzzing over Meadow Lane, there was only the sound of windmill blades, valiantly grinding away in more pastoral times. Flat topography and abundant ocean and bay breezes made the East End an ideal location for windmills, including the meticulously well-preserved structure featured on these pages. Tucked into a verdant property on Gin Lane and aptly named the Mill, it recalls the long-lost era when villagers exchanged news and stories at its base while waiting for their grain to be milled—although they probably complained about the traffic even then.

Originally built on Shelter Island in 1807, the Mill was eventually moved over the ice, folk legend has it, to Good Ground (a.k.a. Hampton Bays). Especially distinctive for its Greek Revival cap, it remained in operation till around 1880, when an original founder of the Southampton summer colony, Charles Wyllys Betts, determined that it would make the perfect addition to his gambrel-roofed, gable-windowed oceanside cottage.

The windmill was affixed to one end of the home, its interior mechanisms removed, and windows and a generous wraparound veranda added. In 1925, the property was sold to architect Goodhue Livingston, who designed the St. Regis Hotel in New York as well as the Old Trees estate on First Neck Lane, and it remained in his family for many years. The Mill’s present owners, David Rozenholc and Dena Weiner, purchased it in 1989, having become enchanted with the home after living in it as a summer rental. “There are so many wonderful houses in the Hamptons,” Rozenholc says, “but nothing like the Mill. It’s different from every house. I like the fact that it will not be duplicated.” 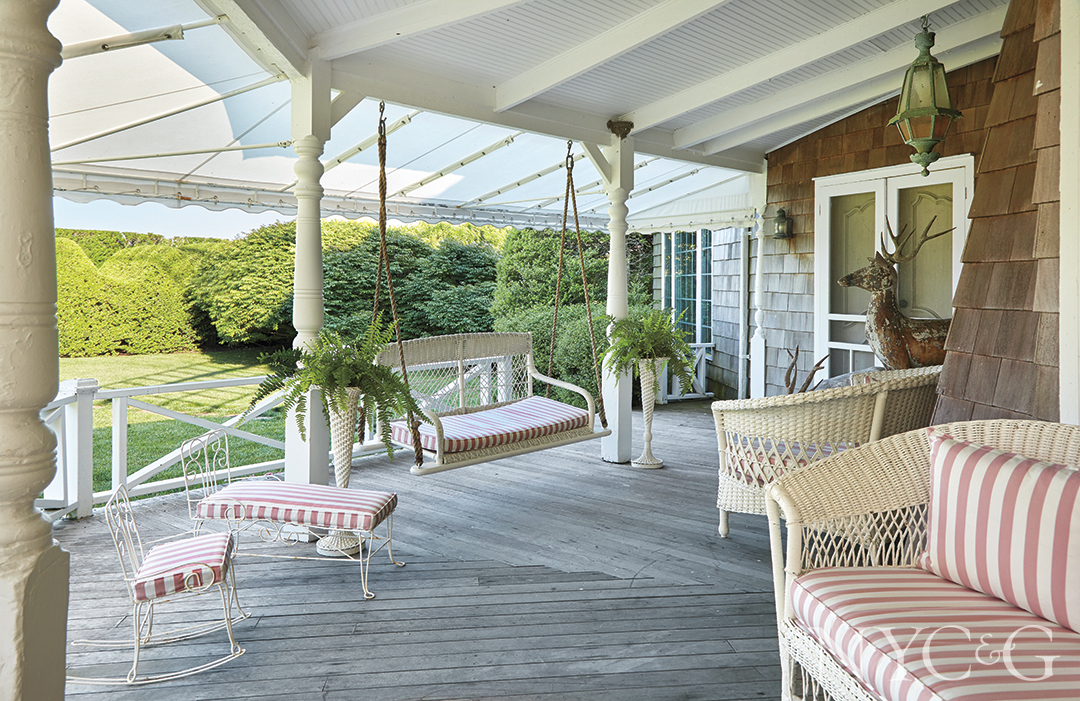 Rozenholc and Weiner enlisted Robert J. Hefner, the author of the book Windmills of Long Island, to help them restore the three-story windmill, from its base to the tiny space under the cap, accessed by a treacherously narrow staircase and distinctive for its original timbers, still bearing numbers that would ensure proper reassembly after the windmill had been moved. The center shaft was sourced from Indiana, where they finally found a white oak large enough to fit the bill.

Today the entire house comprises a living room, dining room, family room, kitchen, and stylish bar (where Gary Cooper and Magda Gabor once tippled) on the ground floor; three bedrooms on the second floor; and a tiny bedroom tucked into the domed third floor. Decorating the rooms, not surprisingly, had its challenges. “Practically all the walls are slanted,” Weiner says, “so it was very difficult to find the right pieces of furniture, let alone get them up the staircases.” She and Rozenholc share with the onetime owner Betts a love of collecting antiques, and the home is a bona fide treasure trove of different periods and styles, from George III to Louis XVI to vintage chinoiserie. 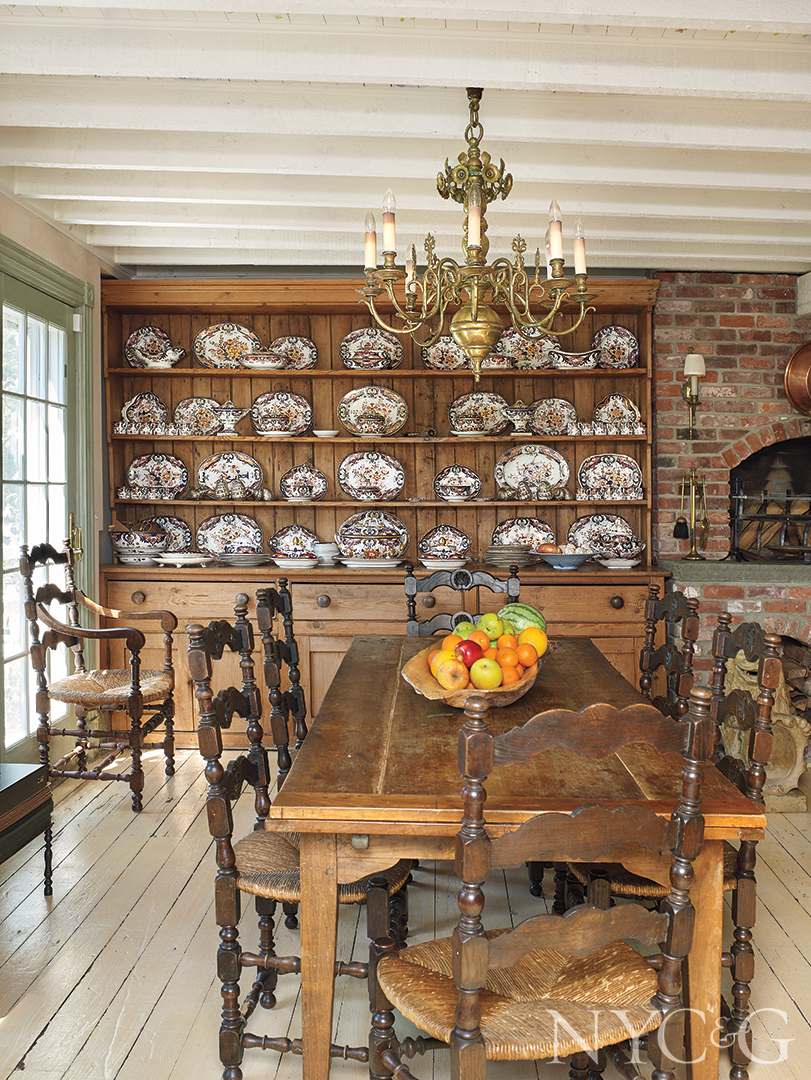 Estate sales and auctions—whether local or something unexpected, like the Christie’s sale of Mexican screen legend María Félix’s estate—make the couple’s hearts race. And they often make purchases with no plan for where their new pieces will ultimately live. “We’ve had 40 years of, ‘Oh, we love it, but where will it go?’” Weiner says, adding that “David is the finder, and

I am the placer.” Which might mean floor-to-ceiling 18th-century French panels, scored from a 1920s estate, in the dining room or a collection of miniature cast-iron stoves, once used as samples by traveling salesmen, lining shelves in a hallway. 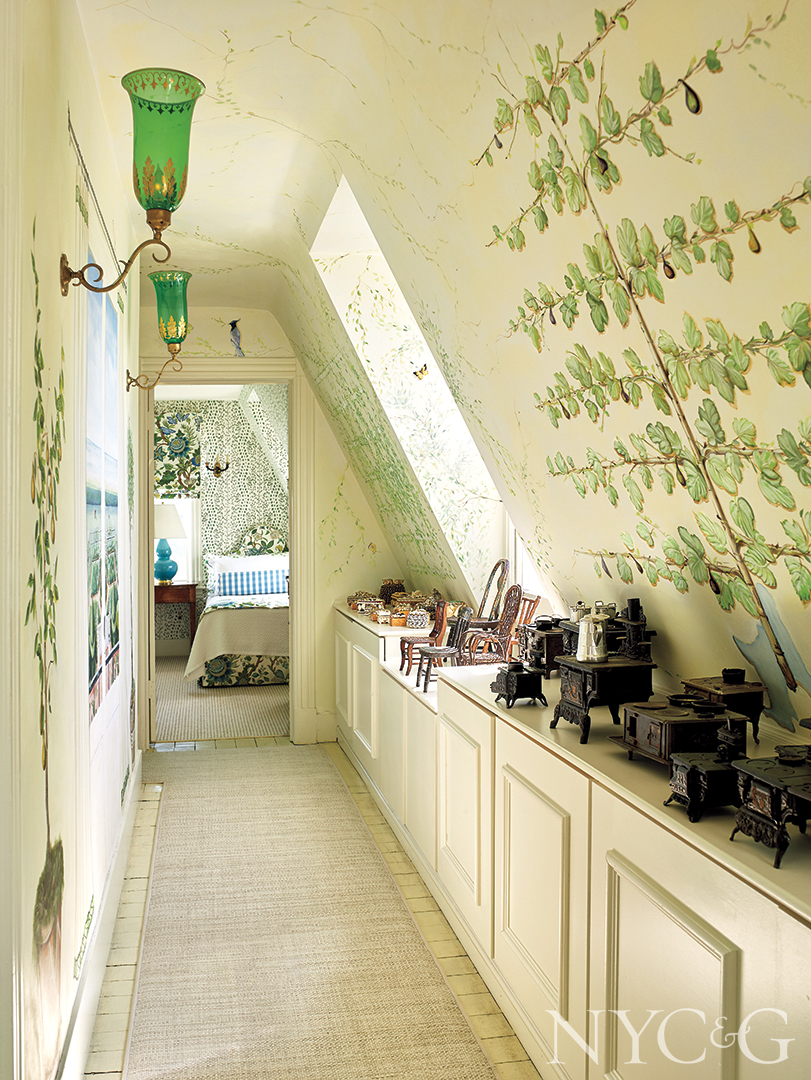 As in many homes, the kitchen is the Mill’s heart, expanded from the original with a Tuscany-inspired brick-oven hearth and dining area. Antique embellishments include James Beard’s wheeled knife cart, fashioned from a former butter churn, as well as his impressive galvanized-iron meat and storage racks, all bought at auction. “I’m a lawyer, not a chef,” says Rozenholc. “But I’m a much better chef than most chefs are lawyers.” (Indeed, he is known as the most successful tenants’ lawyer in New York City.)

A four-bedroom guest cottage has been installed next to the windmill, which also overlooks lush grounds including the inviting swimming pool, vegetable and flower gardens designed by Tish Rehill of Water Mill–based Gardeneering, and whimsical hedges clipped in an undulating fashion to resemble waves. “It’s not a giant piece of property, but it has lots of sweet spots,” says Weiner. “We like to entertain both small and big, from an intimate dinner to a clambake for 80.” Although entertaining big is not currently on the menu these days, the Mill remains a beloved retreat and comforting oasis. As the Chinese proverb goes: “When the winds of change blow, some people build walls, and others build windmills.”