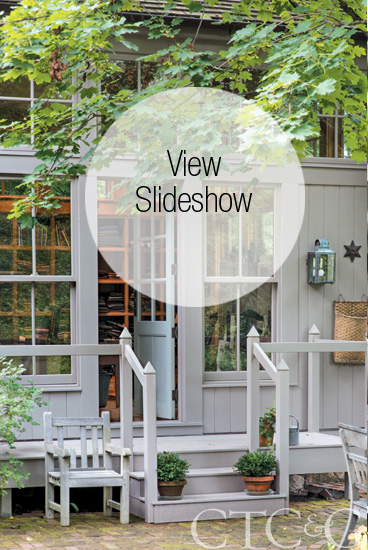 Ask Jane Bescherer why the home she has lived in for 43 years seems to have an enchanted quality and she will tell you it’s about the trees, or the light, or the handcrafted furnishings and antiques hand-picked over decades. What she doesn’t say is that house is really about her—not in a narcissistic sense, but in a way that is so deeply personal that you’d be inclined to describe it as having soul.

From the assemblage of pots perfectly orchestrated on the garden-shed window sill to the sun-drenched loft bedroom she calls the tree house, where grandkids routinely pile in for sleepovers, to the exquisite rugs she hooks by hand lovingly placed throughout, her imprint is everywhere. “It’s a gift to be able to stay in a house long enough that it evolves and changes as your life evolves and changes,” says Bescherer, who along with her husband, Ed, raised four children in the Wilton locale.

Thinking back, she recalls friends and family tried to talk them out of moving there. Where others saw a ho-hum builder’s Colonial, she saw nothing but potential. “Growing up in Indiana, I’d never seen anything like those stone walls or that kind of a landscape,” she says. “It was like an arrow through my heart. I was in love.”

During those early years, the duo made do with cosmetic and minor building changes, like raising the ceiling in the family room and “painting everything to the point where I could barely lift my arm,” says Bescherer, who majored in interior design. Then in the 1980s, inspired by garden tours to England and Italy, she happily traded working as a designer for tending her landscape. And when the ’90s rolled around and the Bescherers found themselves with an empty nest, she had major plans.

“Ed had all his stuff in the living room, and that wasn’t good for my sanity,” says Bescherer, who was already envisioning a soundproof library where her husband could listen to opera at full volume, a small powder room and, above it all, a loft bedroom with windows on three sides. It would be the first of three collaborations with architect Mark Finlay over the next two decades.

“Ed’s room wanted to be a separate pavilion with a glass cupola,” says Finlay who designed it to be a masculine space with a fireplace and white oak everywhere. Outside, he matched the cedar shingles to those on the existing structure. During that time period, a small pink shed for stowing garden necessities was added, and he replaced all the builder stock fenestration with divided light windows with slightly larger muntin bars to change the overall look and scale. “This was one of many steps taken to disguise the original house,” he says. “We wanted it to feel like an additive country house that could have been done over centuries.”

In the early 2000s, Finlay was back on the job, this time designing an art studio to accommodate Bescherer’s new passion for hooking rugs. Knowing his client’s preference for efficiency (“Big spaces just leave me cold,” she says), Finlay responded with a 325-square-foot structure.  “It’s really a workroom,” he says, noting the wall of fabrics is out of direct sunlight. Exterior vertical tongue and groove siding set on a stone base continues the historic narrative. “Every time we did an addition, we actually fixed the house until we reached a point where you could barely make out the existing Colonial,” he adds.

“I love being in there,” says Bescherer, who spends countless hours hooking rugs that take as long as two years to complete. Does she ever sell her wares? “They are like my children. I could never do that,” she explains.

It’s that same sense of protecting what is hers that pervades everything she has created. But Finlay claims it’s Bescherer’s understanding of the importance of continuity and using consistent brushstrokes from one addition to the next that’s responsible for the success of the overall project. “From day one, she had a magical vision that worked with her personality and lifestyle,” he says, “I just carried that out for her.”

A version of this article appeared in the March 2015 issue of Connecticut Cottages & Gardens with the headline: Heart & Soul.