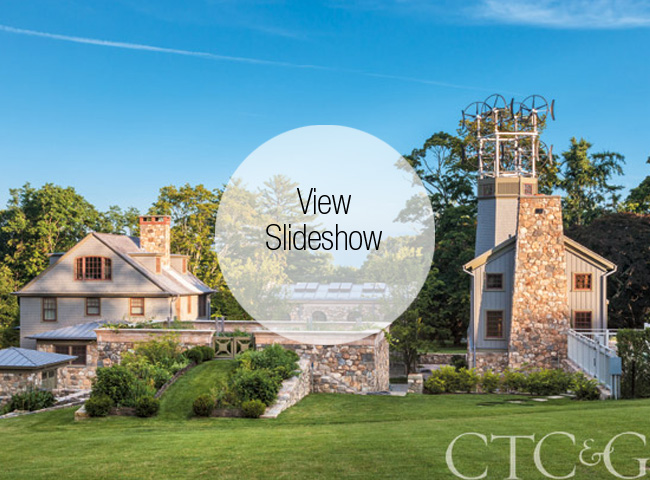 Located near the entrance of a late 20th-century Colonial Revival, two pathways converge on a large stone square with a bluestone compass at its center. “The owner was in the shipping industry, and he wanted us to include a reminder for future generations that shipping contributed to the redevelopment of his family estate,” says landscape architect Diane Devore, who along with architect McKee Patterson was charged with making the residence and surrounding acreage sustainable for another 100 years. With a laundry list of directives that included everything from rescuing the ailing wetlands that border the landscape to designing new structures in keeping with the property’s dairy farming roots, Devore and Patterson worked hand-in-glove to transform the estate into something befitting a contemporary gentleman farmer.

“I grew up on a gentleman’s farm in Redding, so I was used to that kind of landscape,” says Devore, who approached the land as a series of zones starting with the kitchen garden centered on a sundial. Underplanted with thyme, it is filled with cooking herbs such as chives, parsley, rosemary and tarragon that she tucked in among the flowers. From there, Devore worked her way out incrementally onto the 12 acres where she and Patterson defined the agricultural or working realm with a harmonic integration of structures and landscape.

For the second zone, Patterson designed a three-car garage clad in local granite topped with a steel and concrete deck perfectly suited to a rooftop vegetable garden. Here, Devore established a three-year, crop rotation cycle meant to decrease the pest population; a move in keeping with the pesticide- and chemical-free environment she adopted for the entire property. In turn, she revived the orchard with disease-resistant trees like Liberty apples and Reliance peaches, created vernal ponds to attract birds and frogs, and introduced a chemical-free swimming pool filtration system that’s temperature controlled with solar panels. “It’s an Austrian system that uses sand filtration,” she explains.

The desire to have a place to grow lemon and lime trees precipitated the creation of the orangery. “There’s nothing more magical than the smell of lemon blossoms in winter,” says Devore, who went beyond the classical intentions of such a building of just wintering over citrus trees to establish a fully functioning greenhouse. “We use geothermal wells to regulate the temperature in winter, and come summer, we just throw open all the doors so it doesn’t turn into a hot box.”

The duo’s synchronicity continued when Devore wanted to grow berries and Patterson built a blueberry cage, and they masked traffic noise from a nearby road with a water rill. Utilizing rainwater gathered from the rooftops, the liquid is stored in an underground holding tank and pumped up to an overlook at the top of the hill before being gravity fed down the rill. The water disappears under the lawn, reappears next to sets of cantilevered granite steps and ends up in a Japanese water well by the terrace. “Now, instead of cars, you can hear the sound of water cascading down,” she says.

In order for all the buildings to feel like they were from one period, the same granite used on the garage repeats on the greenhouse, the foundation of the caretaker’s cottage, and the base and chimney of the revamped 1850s carriage barn. A small breezeway from the barn leads to the new windmill with eight wind turbines—one of the property’s many energy-saving features. “The owner talked fondly about a wind turbine pump he recalled growing up,” says Patterson, who also introduced geothermal heating and cooling supported by high levels of insulation and super-efficient fenestration in all the structures.

The sum total of their efforts is an environmentally friendly landscape brimming with native plants, bees, birds and butterflies, all poised to take on the next century. “There’s a simplicity to all of this,” says Devore. “There are no boxwoods edging everything in. Instead, it’s all about clean lines and moving through and experiencing the beauty of the whole landscape.”

A version of this article appeared in the May 2015 issue of Connecticut Cottages & Gardens with the headline: Harmonic Convergence.