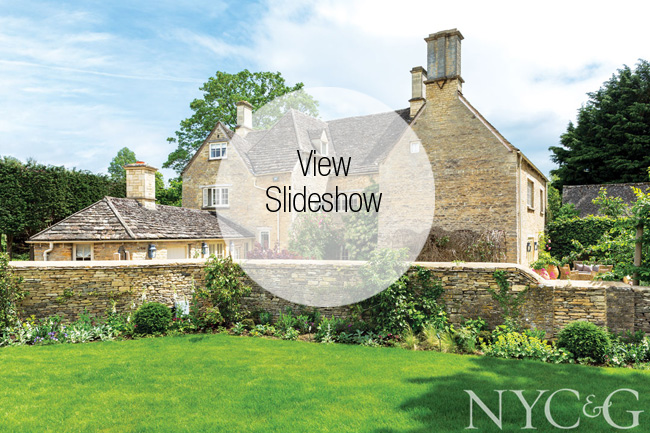 With projects that take her all over the world, decorator Katharine Pooley knows the value of a quiet weekend in the country—and what it’s like to design a home for a discerning client. So she was an obvious choice to put a smart, modern spin on the Cotswolds country house of Sam Branson and his wife, Isabella. The Bransons (he’s the son of high-flying mogul Sir Richard) live in Mill House, part of the Branson family compound in Oxfordshire, which comprises six houses, all with “Mill” in the name (Mill End, Miller’s End), after the mill that once operated there. The primary house—where Sam and his sister, Holly, grew up—lies next door. “We’ve worked on the majority of the structures,” says Pooley, who met the senior Branson while on a trip to Necker Island, Sir Richard’s private getaway in the Caribbean. “They’ve all been lovely, and this is my favorite one to date. Sam and Isabella were really involved, and very thoughtful in the process. I’ve never had so much correspondence with a client. A lot of love went into this home.”

Dating from the late 17th century, the five-bedroom, four-bath house is built in the storybook Cotswolds style, all thatched roofs and arched doorways. The Bransons’ home is exemplary, with a façade covered in wisteria and climbing roses and extensive gardens out back. Pooley jokingly calls it the “hug house,” since it’s so charming that one might feel compelled to hug it.

Charm doesn’t come without a price, however, and Pooley knew that she had to tread lightly with the renovation of the Grade II–listed building. The home was structurally sound, but it hadn’t been lived in for many years and was crying out for repair. The plumbing and electric required work, each bathroom had to be completely redone, and the kitchen needed modernizing. Beamed ceilings were sanded down and the roof completely re-laid with coarse slate tile. The work took a little less than a year.

The Bransons—Sam runs the documentary company Sundog Pictures and is also involved in philanthropic work with his father—are based in London but entertain often in the country, so Pooley was charged with expanding the entrance hall into a large great room and knocking down a wall leading to the kitchen to create a still-cozy space that can handle a crowd. The designer further complemented the warm tonalities of the house’s abundant wood and limestone with a color palette of soft blues and grays. (She favors the sumptuous fabrics from de Le Cuona, which is located just down the street from her London design studio.)

She introduced specific themes into each of the guest bedrooms as well—one the book room, one the white room, one the boat room, and one the toile room, the latter patterned after similarly decked-out chambers at Babington House in Somerset. The white room, predictably enough, is done up in soft whites and grays, with the only pops of color being the feathers painted directly on one wall. For a guest bath, Pooley went with a statement-maker, installing a zinc and pine tub that she found on a visit to the South of France. “It was 500 pounds, and just lying there on the side of the road!” she exclaims. But now it’s just another brief moment in the storied history and deep character of this centuries-old house.

A version of this article appeared in the December/January 2016 issue of New York Cottages & Gardens with the headline: Cotswolds Charm.