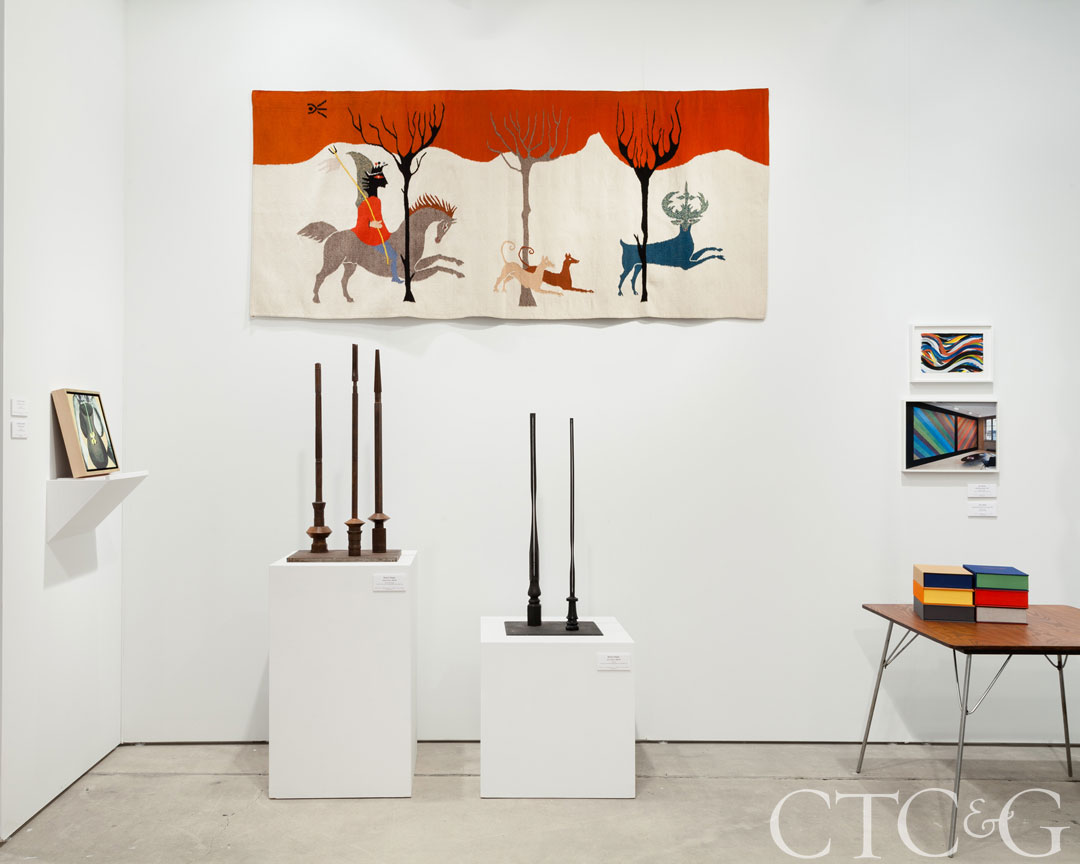 The main event of Art Basel Miami Beach, America’s biggest art fair, is the convention center filled with more than 200 booths exhibiting some of the world’s master works. This past December, bold-faced names queuing up among serious and casual collectors, art advisors and curators included Sylvester Stallone, Leonardo DiCaprio and Eli Broad, Los Angeles museum donor. More than 77,000 people came through the doors, with satellite art shows, gallery and museum exhibits, commercial and retail events, hotels and boutiques also getting into the act offering displays, diversions, and activities that left fairgoers running ragged exploring the many works.

One major adjunct, Design Miami, showcases home decor in a tent across from the main show. Trends this year were furnishings fashioned with swoops and curves, gleaming and deconstructed metals, sculptural and polished wood. Coffee tables were “melted,” punched out for glass insets, laser cut into lacy surfaces or nested like amoebas. Grids, slats and parallel lines showed up in furniture design and artworks—perhaps expressing a yearning for predictable stability.

Several other shows were set up in tents or hotels strung along the beach. At “Untitled,” viewers could see Elvire Bonduelle’s rotating paintings that can be displayed upside down or sideways. Gregory Berg’s dramatic photos of abandoned MTA subway tunnels were hung at Aqua Art Miami, where the booths surround a hotel courtyard.

A schlep across the causeways leads to mainland Miami, site of the Design District, museums and even more shows. Installed in the expansive Art Miami tent, Beverly Pepper’s wooden pinnacle sculptures were on display at James Barron Art, which had journeyed down from Kent in Litchfield County. The nearby Pinta show had a Latin American focus: The centerpiece was a racecar that Mexican artisans had encrusted with millions of colored beads.

Along the hotel row of Collins Avenue, MoMA was selling skateboard decks painted with Warhol soup cans in a pop-up shop at the Delano. Philippe Malouin’s “Movements” (a circle of swingsets) was one of five outdoor artworks commissioned for the week by 1Hotel. At the Sagamore’s annual art brunch, mimosas were served to guests viewing electronic exhibits and an installation by landscape sculptor Alan Sonfist.

I missed celebrity appearances by model Cindy Crawford, singer Wyclef Jean and basketball player Amar’e Stoudemire, but spoke with Airbnb cofounder Joe Gebbia, who was on hand to launch Airbnb’s outdoor space “Belong. Here. Now,” which featured daily programs such as sips and a sing-along with members of Pink Martini. Another night, I met Eva Longoria and Ricky Nelson, who were on hand to publicize their charities at a dinner honoring Miami museum benefactor Jorge Perez. Swizz Beatz rapped at a no-commission art fair in the Design District for Bacardi rum, and Miami Ballet dancers starred at a reception showing off Jordan Matter’s photographs of them leaping around Miami landmarks.

As the show was winding down, contractors were moving in to renovate the convention center, so that next year’s crowds will visit a slightly different setting. But an innovation many fairgoers would like to see is improving transportation. Stuck in paralyzed traffic between so many events, the principal “artwork” I studied all week was the dashboard of my car.

A version of this article appeared in the February 2016 issue of CTC&G (Connecticut Cottages & Gardens) with the headline: Art Basel Miami Beach.