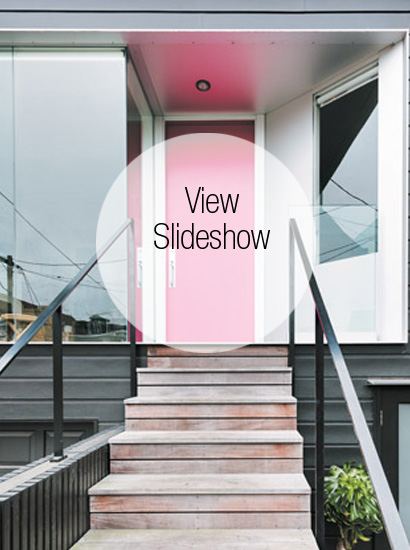 When bi-coastal photographer Thayer Gowdy set out to renovate her San Francisco home, she sought help from a good friend, who just happened to be renowned architect Craig Steely.

Known for his cutting-edge, modernist structures, Steely found inspiration for transforming the 1908 Edwardian within combination of old and new.

“I just don’t like it when people do modern interiors and leave the façade completely untouched. It seems so schizo,” he says. “I wanted to create a building that didn’t have a disconnect between now and the past, to show the evolutionary steps in architecture. Now the house is modern, but you can also tell that there was something here before—an old San Francisco.”

Gowdy took a gamble in 2007 when she purchased the 1,200-square-foot Bernal Heights house with no contingencies. It was in sad condition, featuring scorched floors, graffiti-covered walls and a barely functioning bathroom. Renovations began, but were cut short by the 2008 market crash—in order to pay the mortgage, Gowdy rented out the main level and moved into the studio apartment on the ground floor.

Three years later, with the economy in rebound, Gowdy started planning her move back upstairs. But the front of the house was deteriorating rapidly—the tiny front porch was leaking water into the garage, and the stairs were crumbling. “I had to do something. I’d always dreamed Craig would do a house with me, but assumed it would never happen,” says Gowdy, who has known Steely for more than a decade and built many a driftwood hut on the beach with her friend and fellow surfer. So she tempted the in-demand architect with creative freedom: “I said to Craig, ‘You can do whatever you want, I will sign off on anything, as long as we stay within this budget. There’s only one thing: The house has to be black.’ He said, ‘I’ve never done a black house. We’re on!’”

Steely began the renovation of the downtrodden Edwardian with practical upgrades: Foundation reinforcements, a new furnace and other improvements were required in the turn-of-the-century home, which still had knob-and-tube wiring and gas lines going to some of its light fixtures. With a fresh infrastructure in place, Steely turned to the façade, creating a floor-to-ceiling window wall in the front living room that frames a stunning view of Bernal Heights: “The whole feeling of that giant window is epic; it has really made the house,” says Gowdy. The existing first and second floor interior spaces worked well, so Steely left them intact, but expanded and renovated the ground floor, which now comfortably houses Gowdy’s sprawling photography studio.

And though small, exterior spaces received no less attention: “Working in Hawaii has really pushed me to think harder about using outdoor space here,” says Steely, who has offices in San Francisco and on the Big Island. He reconfigured the front yard, adding a tall fence—also swathed in glossy black—that creates a private entry courtyard. Gowdy, enamored of her new transition area between studio and home, proposed the idea of painting the front door hot pink (specifically, Benjamin Moore Gypsy Pink), the color that also adorns the cover of her photography portfolios.

The little black house now stands testament to the potential of seamlessly and elegantly merging traditional and modern architecture. “Even though it’s just a house,” says Steely, “it can have a civic and cultural impact.”

A version of this article appeared in the February 2015 issue of San Francisco Cottages & Gardens with the headline: Back in Black.