While searching for a new apartment, architect David Howell decided he’d rather build his own instead. 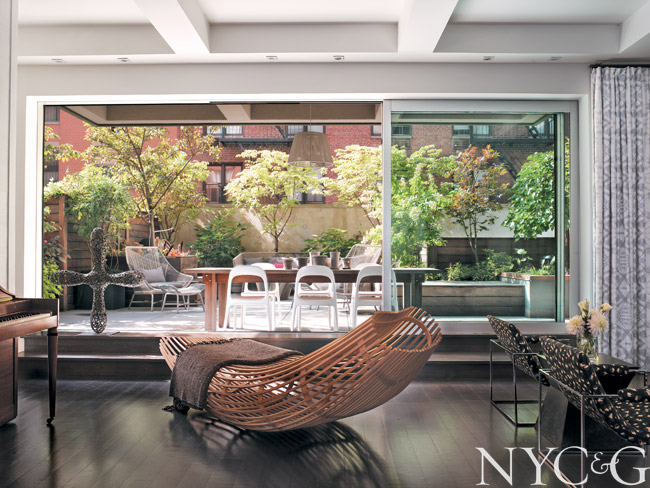 When architect David Howell decided to build a new home for his family near Gramercy Park, he looked to his everyday life for the blueprint. He had been living in a Union Square loft with his wife, interior designer Steffani Aarons, and their twin daughters, Bianca and Sintra, and wanted to overcome the somewhat ironic limitations of so much vast, open space. “We had one huge common zone, and all our bedrooms opened onto that,” explains the native New Zealander, who creates exquisitely balanced designs for both private clients and commercial entities including Coach, Badgley Mischka, and Corcoran Real Estate. “The setup worked well when the kids were little, but as they got older, we realized we needed a greater distinction between our private and public lives.” 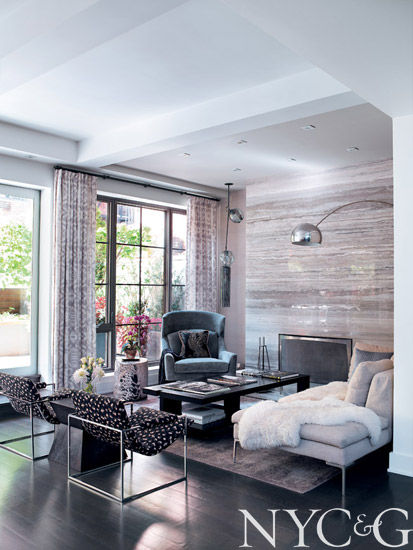 The criteria for the new space: It had to lie below 23rd Street, on the east side of Manhattan, and be within walking distance of Bianca and Sintra’s school. What’s an architect to do? Find the perfect location, then build a condo to suit his needs. “We viewed multiple properties with a developer, and finally this one fit the bill,” Howell says of finding a single-story former manufacturing building dating from 1920. “As soon as we saw it, we said, ‘This is it!’”

After signing up with three other partners in his condominium project, Howell designed and built a seven-story building–six stories atop the existing structure–with each partner taking a floor and the remaining floors put on the market. “Each of us wanted to construct and invest in it,” Howell says. “We found it a very viable mix.”

Three years of development and much anticipation later, Howell’s sleek building emerged, handsomely dressed in mocha brick with bronze-tinted double-glazed windows. The defining characteristic of every floor is its equal divide between bedrooms and living spaces. “There is a clear axis between the two,” Howell explains. Stepping from the elevator, “You spin to the right for public and to the left for private.” The bedrooms atypically face the street, forming a corridor of rooms, as if in a boutique hotel.

Given the expected first dibs, Howell and Aarons were leaning toward the penthouse, but ultimately settled on the 2,500-square-foot, 40-foot-wide second-story apartment. The unit sits just above the deeper, ground-level garage—meaning they were able to build out the exterior space and create a verdant patio. “Now we have a backyard,” Howell says of the 800-square-foot additional expanse, where thyme, basil, rosemary, and mint now thrive beneath hydrangea, dogwood, and wisteria. “It’s been magical for the kids to go outside, play in the snow, or get some sun.”

Both indoors and out, the apartment is a true respite from the family’s busy lives. The living area is a study in neutrals, with a vintage beige silk carpet, walls painted in Benjamin Moore’s Vanilla Milkshake, and textural details like white oak wall paneling set in widths of two, four, and six inches. In the streamlined open kitchen, low drawers substitute for cabinetry throughout and contribute to what Howell calls the apartment’s “nonvisual appeal.”

Oak floors stained a deep brown ground furnishings ranging from a pair of Milo Baughman chairs covered in a Kelly Wearstler animal print to a BDDW lacquered charcoal coffee table to a custom dining table by Howell’s firm, DHD Architecture Design. A ribbed rocker, entitled Body Raft, was constructed from Australian ash by artist David Trubridge. “When the girls were little, they used it as a seesaw,” says Aarons. In addition to being durable and kid-friendly, the pieces also map out dining and socializing zones within the public space. “I love the weight of the larger furniture, the permanence,” says Howell. The composition communicates luxury without being the least bit ostentatious.

In the more family-centric areas, Howell and Aarons gave priority to the needs of their 13-year-old daughters. Opposite the entrance, they built a mudroom with plenty of hooks for coats and bags, and bins for socks and gloves. “People often don’t think they need a mudroom,” says Aarons. “But with families, unless you’re constantly putting coats away, they’re going to end up in the hallway, no matter where you live.” Indeed, kids will be kids, so the resourceful parents graciously sacrificed two feet in their master bathroom in order to enlarge the girls’ bathroom enough to accommodate a pair of Corian sinks. “If they’d been kids of two different ages, we’d let them fight over a single sink, but with twin teenage girls, we thought it might save headaches later in life,” Aarons explains, adding with a smile: “I’m so glad we had the foresight.”

A version of this article appeared in the May/June 2014 issue of New York Cottages & Gardens with the headline: Custom Condo.