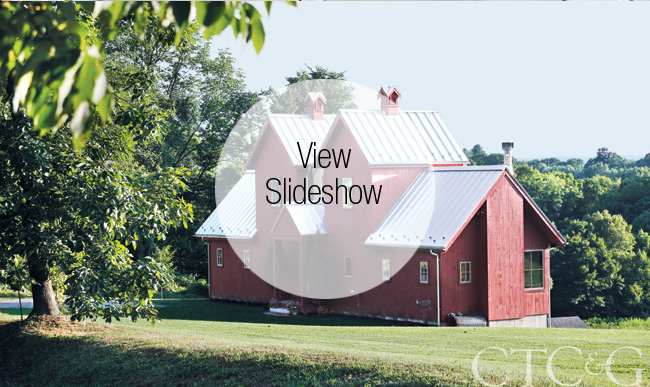 When I came to see her, she was in one of the sheds, sawing a four-by-six with a handsaw,” architect Jonathan Wagner remembers of his first meeting with a client about her house project.

The client was Aimee Carpenter, a former graphic designer for Martha Stewart and current craftsman and photographer, who brought not only her desires for a rural retreat to the architectural table, but also what Wagner calls her “incredibly imaginative” creative spirit.

Carpenter was living in a larger, more traditional house in Darien and decided she wanted something a little closer to nature that was more suited for the animals she loves and better for her creative work, which covers everything from wood-block prints to found-object assemblage to fine woodworking. Wagner, whom she found through a friend, was a perfect match. “We had the same vision,” Carpenter explains. And the same dedication: “He spent a night in a tent on this land before we started designing, so he knew where the sun rose and set.”

The parcel of land they ended up with was part of a much larger farm. Once they found the site, “the challenge was to figure out the house to build there,” Wagner says. The architect is known for working in a multiplicity of styles—he’s done everything from Shorehaven Tudor houses to an Old Lyme modern barn—and was open to sensing what would work best for the site and the client. The two landed on working with a contemporary iteration of a barn, at a very small scale. At the beginning of his career, Wagner did a very small project that helped him understand that size and elegance did not in fact correlate, and that it was possible to make a very small, very architecturally thought-out project that worked not only on a conceptual and intellectual realm, but with a massive injection of practicality.

“I usually apply two major tools when I’m working on any project,” he explains. “One is to use scale and proportion to make the house appear to be larger than it actually is.” The other is to use materials that might appear totally vernacular but actually operate at a super-contemporary level. Here, for Carpenter, he streamlined the shape of the house and kept it low to the ground and horizontally focused. Windows were sized disproportionately so as to make the entire building appear bigger, and he painted vertical barn siding red (so as to look utterly traditional but stay within the relatively tight budget) and topped it with a silver galvanized metal roof. Tiny windows with cupolas at the top add a sense of tradition (via material) and expand the trompe l’oeil effect of this being a much bigger structure.

At 1,200 square feet, the house holds a linearly organized kitchen, living space and three bedrooms—a master and two smaller bedrooms (for Carpenter’s children). “The long hallway runs almost the length of the house, so you get the sense of a great expanse of space,” Wagner explains, and describes how the windows from the single rooms that open up off the length of the hallway bring light into the whole house. “My role as an architect is to make it functional and comfortable,” he says. His role was also, crucially, to create a supportive environment for what he calls Carpenter’s “prolific ability to create things.” Industrial-whisks-turned-light-fixtures, for instance, hang over a countertop of her own creation, and the sky blue ceiling and bright-red ottoman and silver eggshells arrayed on the fireplace column are all Carpenter’s contributions. “This house is really about Aimee’s stuff and how to use and place it,” he says. “My job was to create balance.”

A version of this article appeared in the March 2015 issue of Connecticut Cottages & Gardens with the headline: A Natural Fit.