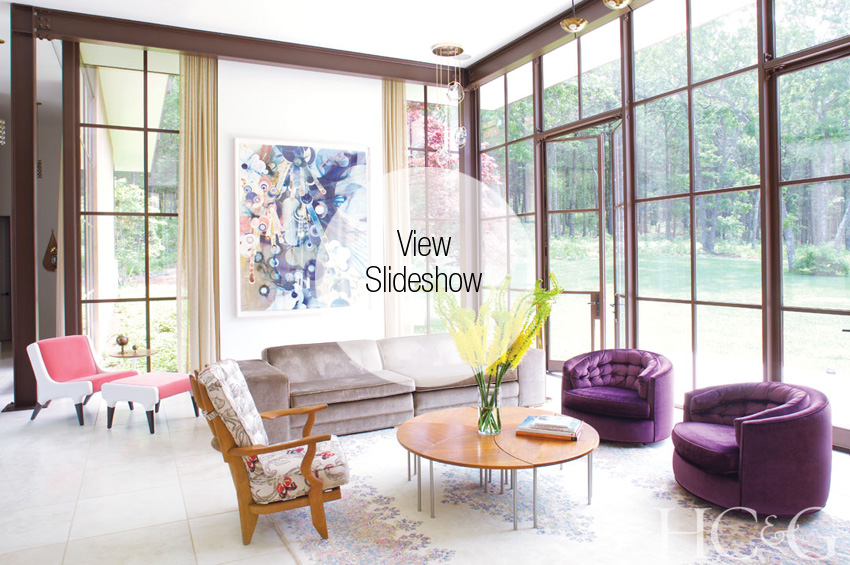 To many architects, the dividing line between modern and traditional design is a vast, unbridgeable chasm. Either austere minimalism or rich historicism: Take your position on one side or the other. Michael Haverland will have none of that. His work is modern, and at the same time it overflows with activity and color and texture; he designs houses of steel and glass and fills them up with chandeliers and furniture in multiple styles and patterns. He is a modernist whose heart belongs to clutter.

But Haverland’s notion of clutter is as disciplined and rigorous and attentive to detail as Mies van der Rohe. The new house he has just completed for a New York businessman on a 20-acre site in the Northwest Woods is a case in point. It is a villa of glass, steel, mahogany, and stucco, grand and sumptuous, its various wings sited with precision. “I wanted it to feel not like a house in the woods, but like an oasis carved out of the woods,” Haverland says. “I hate the suburban typology of the house just plunked onto the land.” The large, L-shaped main house and its accompanying pool house, exercise pavilion, and garage have echoes of Frank Lloyd Wright, of the American industrial vernacular, and of European modernism, all woven together into something that is not quite like any of these things but is very much Haverland’s own.

The first impression the house gives is understated. A mahogany gate opens to a short drive that leads to a parking court, defined mainly by the façade of a three-car garage. All that is visible of the main house is its narrow end, looming up to the left, with a large gridded window of glass and steel. That kind of window, which harks back to the early-20th-century factory aesthetic, is something of a Haverland trademark, one of his favorite ways to fulfill what he considers to be the essential obligation of “establishing a connection to the traditional, even in a modern house.”

As the entry sequence begins to unfold, the big window is the only break in the solid stucco mass of the house. Between the garage and the end of the house is a low mahogany wall that contains what appears to be a front door, but which turns out to give entry into a richly landscaped courtyard, an outdoor room of high grasses and a mown path punctuated by carefully positioned crape myrtles and red maples.

And then Haverland’s carefully choreographed procession moves into high gear, as the house, which turns out to be anything but restrained, reveals itself, step by step. The main structure encloses two sides of the courtyard, one of which is marked by an even rhythm of Haverland’s large steel windows, the other of which contains a broader expanse of glass that encompasses the actual front door, up a short flight of steps.

With all that buildup, there is no need for a formal vestibule: The front door opens directly into the main living area, which incorporates a small bar, with a dining room and kitchen beyond; all are open to the lawn, pool, and patios. The overall layout is simple. The primary living spaces form one bar of the L, and a long corridor of guest rooms (there are seven—the owner loves to entertain) is set at a 90-degree angle to fill the other side of the L. The master suite lies at the corner, a hinge between the living spaces and the guest area.

The straightforward floor plan belies the richness of the design, however, as well as the exuberance of Haverland’s interiors. The 13-foot-high ceilings in the primary living spaces are punctuated by roughly a dozen different hanging light fixtures, a veritable catalog of mid-20th-century-modern lighting. “Pendant lights, rather than recessed lighting, offer a great way to deal with space,” says Haverland, who found many vintage fixtures on 1stDibs and eBay, in addition to new pieces from Schoolhouse. The furnishings also comprise a mix of largely vintage pieces, including a George Nakashima bench and chairs by Gio Ponti, Marco Zanuso, and Eero Saarinen, the latter customized by Haverland with brown leather backs and seats covered in a vibrant orange fabric—as good a reminder as anything that Haverland looks at modernism as something not only to revere, but also to have fun with.

That spirit continues in the kitchen, where custom cabinetry features front panels of crushed mother-of-pearl, an allusion to the beach, as well as the guest suites, each of which embraces a specific color that appears in wallpaper, patterned tile, and “matching” cutting gardens that lie directly outside the windows. On the other side of the house, Haverland’s modernist instincts kick in again, where a long stucco wall around the pool and patio calls to mind the work of Luis Barragán. The wall is a sculptural piece in itself, completing Haverland’s oasis in the woods: part enclosure and part gateway to the view of the lush forest beyond.

A version of this article appeared in the August 15, 2016 issue of HC&G (Hamptons Cottages & Gardens) with the headline: Going Wide.