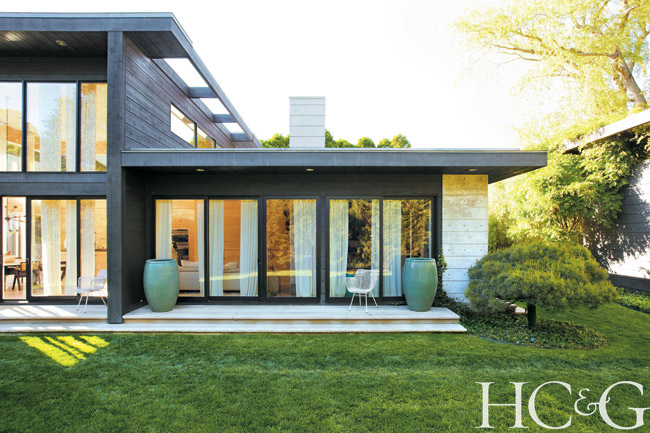 In the late 1980s, when Cheim & Read gallery co-founder John Cheim bought his Amagansett retreat, it was a diminutive barn-red 1960 kit house on a half-acre lot, dominated by a prodigious weeping willow. He did away with the driveway (“I didn’t want to see cars in my yard,” he says), enclosed the property with plantings for privacy, painted the house white, and then hid the structure in a lovely tangle of wisteria and trumpet vines.

That was enough for Cheim for two decades, until he started itching to change things up. To do so, he hired Sagaponack-based architect Nick Martin to help him give the cottage a slightly more dramatic transformation. “The existing structure was dark and poorly built, but had modernist bones,” recalls Martin. The pair’s goal: a contemporary, Asian-inspired refuge built for indoor and outdoor living, with spacious rooms, rich materials, and great light. “It’s a very Hamptons thing to go bigger and bigger, but John was very respectful of scale,” adds the architect, who retained the original cottage’s historic details as well as its modest footprint. A judiciously employed mix of just five materials—concrete, steel, glass, reclaimed cedar, and white oak—further underscores the seamless, streamlined design scheme. 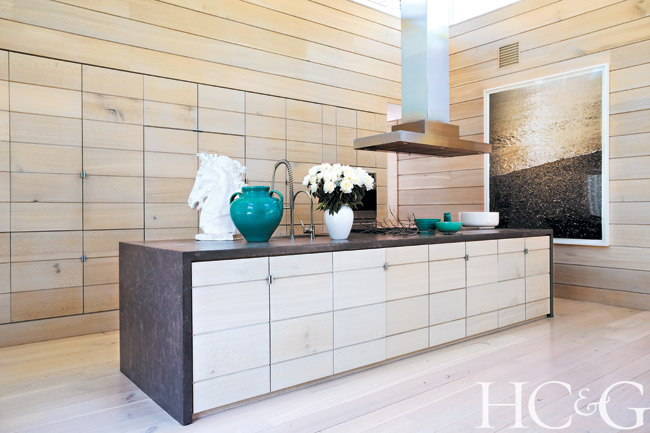 For inspiration, Cheim looked to his family and his California roots. “In the 1920s, my grandmother, Anne Oliver, a designer for San Francisco’s then-fashionable Gump’s department store, had a beautiful home made of lava stone and rough-sawn cedar planks, along with goldfish ponds, enormous pine trees, and California pottery,” he says. “I wanted a simple house, continuous in color and material, that was harmonious with nature. Most of the artists we work with in the gallery—Joan Mitchell, Louise Fishman, Lynda Benglis, and Pat Steir, among others—have a sensitivity to nature and incorporate its beauty into their work, and the house reflects that.” Not just the materials but their hues follow this dictum, with exteriors stained “the color of wet bark after a rain, and the interior walls the color of light on sand.” Situated in the middle of the yard, the house appears as if it has been plopped into a sophisticated nature sanctuary, with abundant glass windows and doors achieving the desired indoor/outdoor effect. 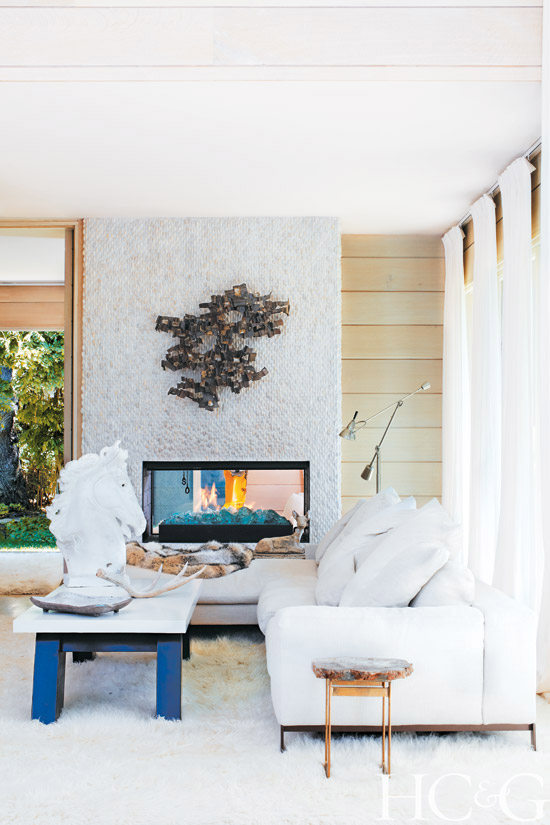 Loewen sliders link the outdoor deck to a large open kitchen and living space clad entirely in bleached white oak. “The kitchen does not scream ‘kitchen’—it was designed to disappear,” says Martin, who made everything vanish with a deceptively simple grid of storage cabinets and refrigeration units veneered in the same white oak. “John is drawn to textures and shapes, and the kitchen reflects that. It’s very sculptural—from the cabinets to the stainless-steel range hood to the gray concrete countertop.” The bathroom counters, as well as the massive white dining table—a copy of a smaller Pierre Jeanneret original from the 1950s—are also made of concrete. Providing a stunning vertical exclamation point on the wall behind the latter is yet another nod to Cheim’s past: a sign spelling cheim, which comes from the early-1950s office of his paternal grandfather, Cheim Lumber founder Leo Cheim.

On the far end of the living area, an intimate sitting room beckons with a stone-lined fireplace wall, a sculpture by Gloria Benedetti Seneres, and a gas-flame fireplace filled with luminous aqua glass crystals. Three small but airy bedrooms are tucked in discreet corners off the main public space, all offering garden access. In addition to the pool’s peaceful sitting area and pergola with cascading white wisteria, a serene vanishing-edge meditation pond, abundant with water lilies, provides further quietude and reflective escape.

Offering a change of pace from the main house—and a slightly less bucolic form of escape—is the film and music room above the garage, a self-contained sanctuary/den/screening room/man cave with inky black walls, blackout window shades, and sliding doors that conceal a bar and bath. Two colorful canvases by contemporary Hamptons artist Robert Harms, a Saarinen Womb armchair, and a green linen sofa from Design Within Reach add intriguing layers to the mod mystique. 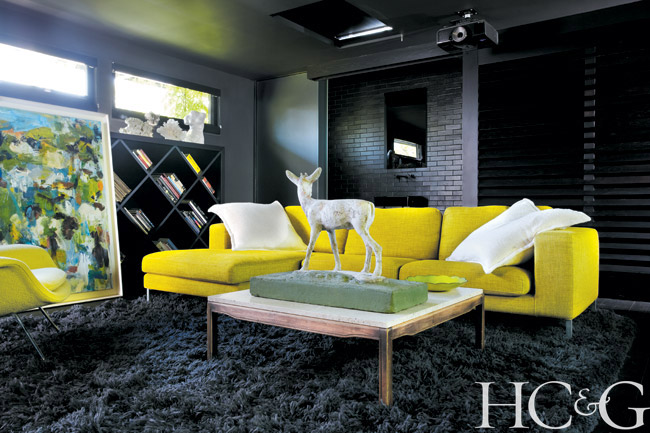 Although in some ways the house might ultimately suggest Palm Springs more than it does the East End, Cheim is utterly content here, still smitten with the Hamptons and intent on never letting his residence become more powerful than the nature that surrounds it. “Whenever I go to the house,” he says, “I am so happy to look at clouds and trees and water, and to hear the ocean. This place complements nature without imposing on it. In some ways I feel like I am camping out in a tent in the middle of my yard, like I did when I was a kid.”

A version of this article appeared in the August 15 2014 issue of Hamptons Cottages & Gardens with the headline: Mod Men.