Able to withstand the test of time, this home is a true masterpiece. 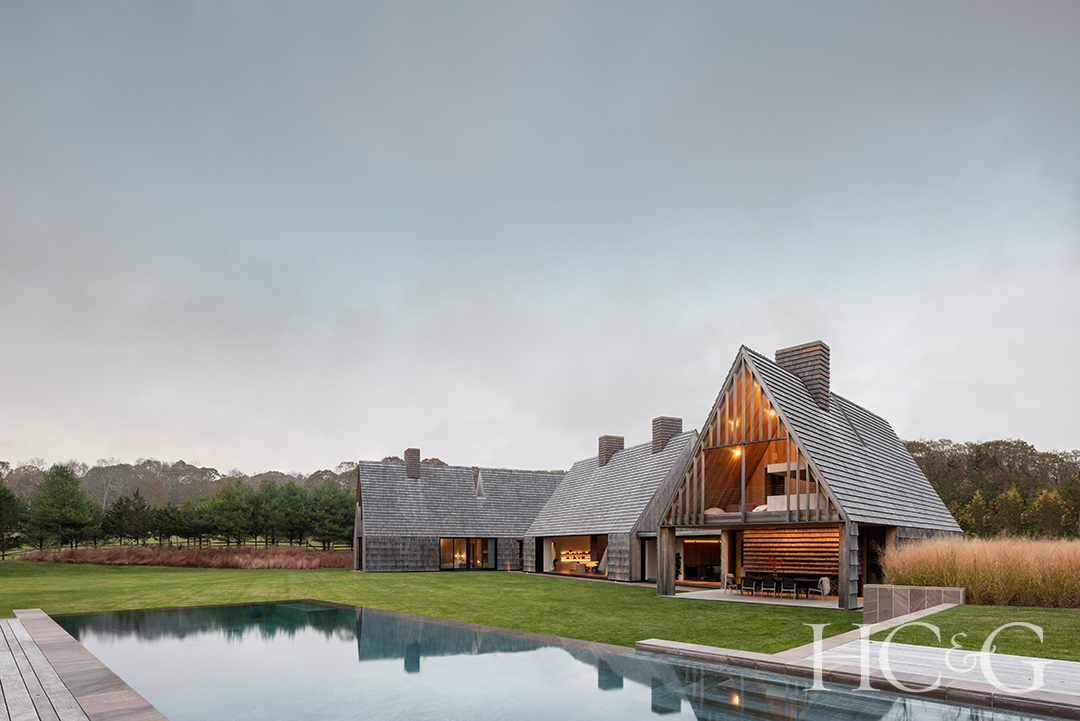 Jon Hummel was a kid when he met his wife, Janice, on Long Island. Although they never dated while attending East Hampton High School, they got together after college, when he was working in his father’s Manhattan office and she was living in the city. The couple eventually returned to the Hamptons, where Jon has followed in the footsteps of his general-contractor father, John Hummel, building custom houses across the East End.

Meanwhile, Janice became a real estate broker and then pivoted toward interior decorating, after a buyer of a former home of theirs had admired the design work she had done on it and recommended her to a friend. “Our kids are in school full time, and it’s nice to do something creative,” explains Janice, today the principal of JL Hummel Interiors.

A spectacular lot in Amagansett inspired them to create their current dream house. A potential client had asked Jon to build on two and a half magnificent acres of raw land, but he grew impatient with the timeline for approvals and construction and opted for a different, finished house instead. Janice and Jon snagged the property, even though it was wildly overgrown. 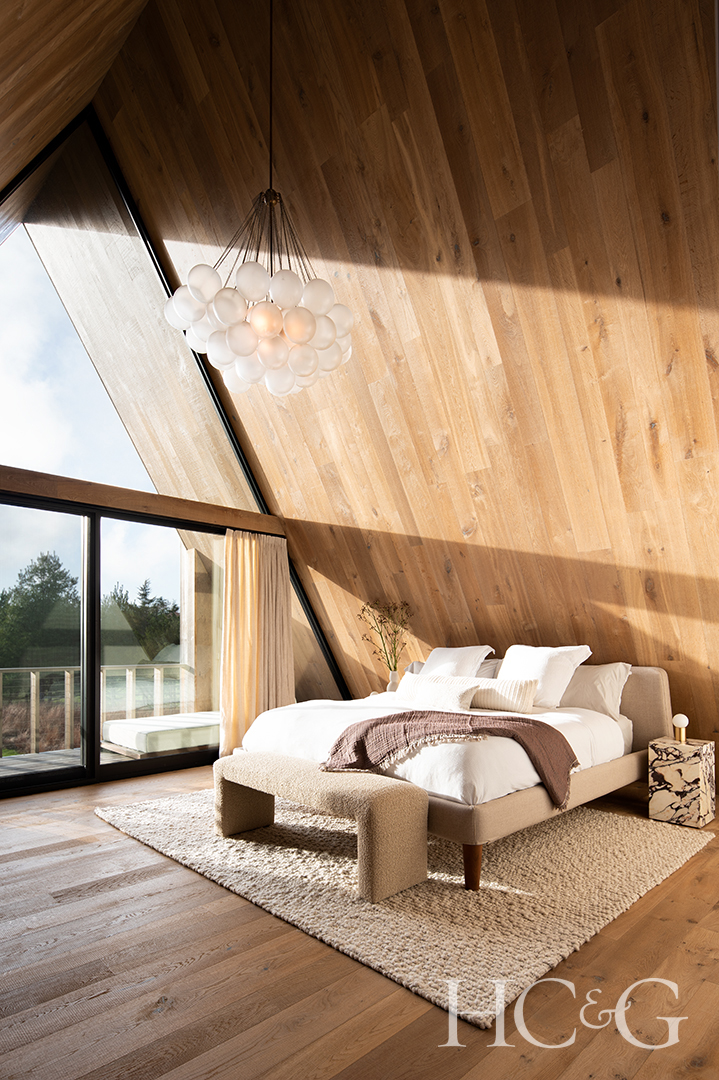 An Apparatus chandelier hangs above a Design Within Reach bed in the primary bedroom. The bench is upholstered in Dedar’s Karakorum bouclé. Photography by Bates Masi + Architects

“You definitely had to have imagination,” Janice recalls, but her husband recognized the potential in “such a large, open lot, with enough room for a big lawn.” Peconic Land Trust protects the surrounding pastures and horse paddocks (as well as the farm views). The couple even brought in a scissor lift to assess whether they’d be able to see the ocean from the building site. But the sun setting over nearby fields proved more alluring, which led their architect, Paul Masi, to propose grasses in their many forms as an overall design motif. Masi’s scheme called for neatly clipped lawns framed by borders of unclipped grasses nodding in the breeze.

Most unusual was his suggestion to use grass architecturally. Jon jumped onboard, having recently thatched the roof on an outbuilding at a traditional home. “There’s some level of risk in doing thatch, but as a builder, Jon was able to understand how it’s put together,” says Masi, whose firm, Bates Masi + Architects, began collaborating with John Hummel and Associates in the 1980s.

The thatch cloaks the walls and the gable ends of the house— not just outside, but indoors as well—and can withstand two or three dozen years’ worth of sea air, just like the Alaskan yellow cedar shingles on the roof. Other textural elements include terra-cotta shingles in a blend of earth tones on the fireplace surround, low garden walls of weathering steel cloaked in a coating of red rust, and ceilings and millwork made from factory-fumed oak planks that still sport bandsaw marks from the mill. 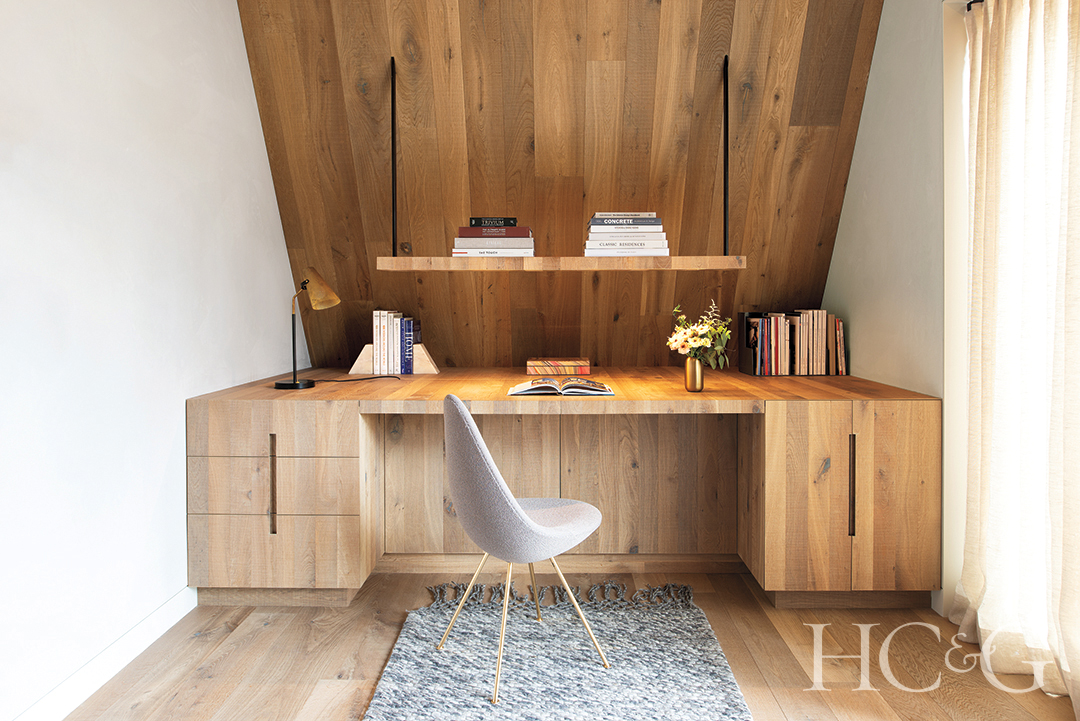 The Hamptons house is organized around a central living, dining, and kitchen pavilion, with a garage wing and a family wing on either side. Janice describes the A-frame rooflines as “Nordic,” although the design palette leans toward “a moody feel, with no white anywhere.” Unpainted gypsum wall plaster is a soothing pale beige, and wallboard appears only in the basement gym and playroom—also painted beige to match.

“This isn’t the type of house where you do light marble with veins,” Janice adds, and the kitchen follows suit, sheathed in misty Grigio Billiemi marble, a Sicilian sedimentary stone embedded with fossils. She and her husband are still adding furniture to fill a bare spot here and there, but what’s the rush? “It’s fun to live in a project that you love.”

The print version of this article appears with the headline: Stony Hill.
Subscribe to C&G

This article appears in the August-15 2021 issue of HC&G (Hamptons Cottages & Gardens).