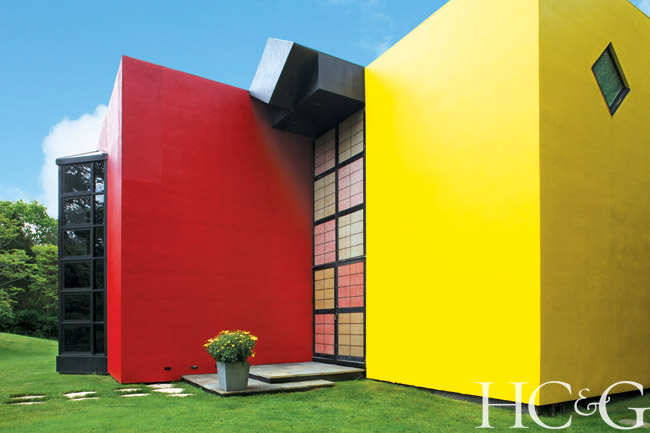 The house is a machine for living” is not a phrase that immediately conjures feelings of comfort and domestic tranquility, yet Le Corbusier’s words have been a mantra for architects since he wrote them in 1923. For Bridgehampton-based architect Preston Phillips, the master’s words couldn’t be more appropriate. While Phillips’s house, tucked deep in the woods near the Bridge-Sag Turnpike, might seem anything but “homey” to some, he designed it with comfort and style in mind.

That Phillips even became an architect in the first place is something of an accident. “In high school, I had thought I wanted to be an aerospace engineer, but one day my guidance counselor called me in and told me I should study architecture. I had to go to the library to figure out what architects did! The only two books on architecture it had were about Frank Lloyd Wright and Thomas Jefferson.” They turned out to be seminal influences on Phillips, who is also an ardent admirer of the modernist architect Paul Rudolph, with whom he started his career after receiving his degree from Auburn University in his native Alabama. 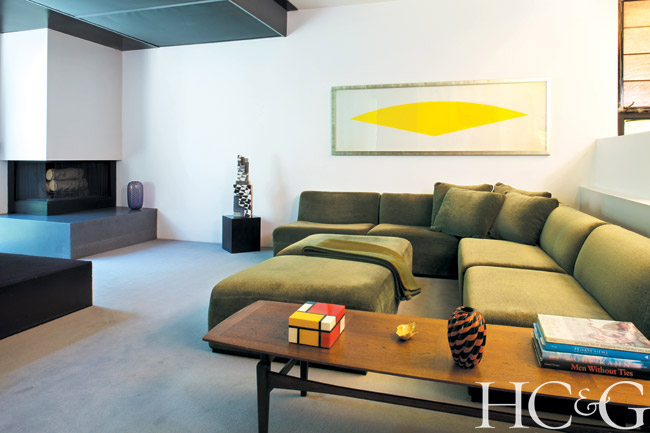 Also impactful for Phillips was “the landmark De Stijl exhibition in 1984 at the Walker Art Center in Minneapolis,” he recalls. “The more I studied the movement, the more infatuated I became with it.” Anyone who visits Phillips’s house—which he has been designing in stages for 25 years and shares with his partner, Charles Forthofer—can see the influences of the early-20th-century Dutch art and architecture movement, principally the brilliant red cube and yellow rectangle that make up the main living space and a separate blue pyramidal structure that houses his architecture studio. De Stijl adherents advocate a purity of shape and color, though in this case the elemental architectural volumes in primary Crayola hues are much more complex than they first appear, standing tall at the end of a long, sinuous driveway. “It’s designed so that the eye never rests—there’s always a view through,” explains Phillips, who in recent years added a perfectly round punctuation mark: a circular swimming pool enclosed by a boxwood hedge. “Geometry has always been the underlying thread in my work.” 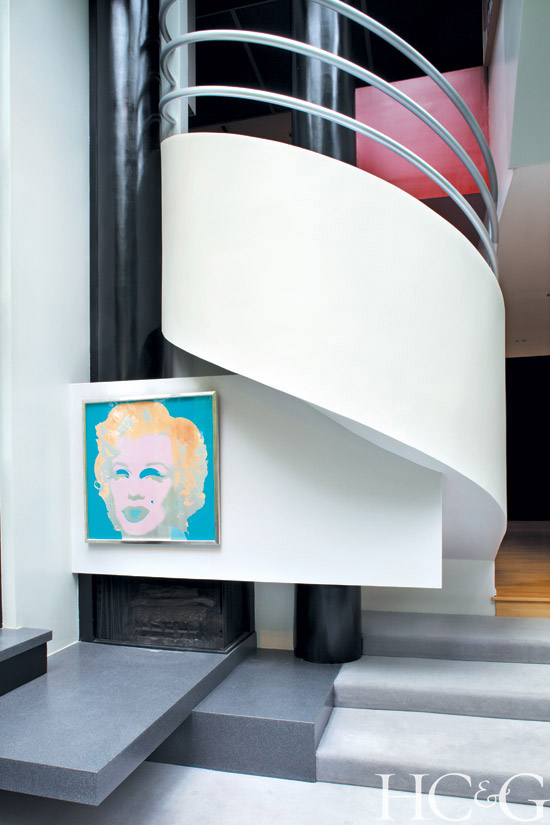 Inside the house, Phillips continues, “a solid has been carved out to form the living areas,” and indeed, even the Cassina sofas by Philippe Starck seem to be an integral part of the architecture, so tightly do they fit in their allotted space in the glass-walled sky room, or living room. That Phillips found such ideally sized sofas is remarkable. “They needed to be an exact dimension, and it was a total fluke that I found them. They’re extremely comfortable to boot!” The sky room is designed as a series of horizontal shapes that morph into one another, such as the wide, low steps, the hearth, the sofa ledge, and the windowsill that the Starck pieces back up against. The effect is like a ribbon that unfurls from the adjacent sculptural staircase and unravels around the room with different purposes in mind. “Frank Lloyd Wright was a genius at tying rooms together in this manner. Clients are always surprised by the dimensionality of this kind of thinking.”

The neutral tones throughout the house are complemented by a considerable amount of blackness, but it doesn’t read as depressing or somber. Instead, Phillips has used the color to its fullest potential, from the many striking window frames to the wall on which a huge work by Robert Rauschenberg hangs, looking as though it’s floating. “People are usually scared of black, and it’s often poorly employed,” says the architect. “But if you use it properly, it can make objects move through space, like they’re part of a ballet. In fact, black is frequently used in set design to concentrate the eye on a specific area or event in a production.”

Phillips often employs industrial, cutting-edge materials in his residential work as well. In the master bedroom, for instance, a window seat made of one-and-a-quarter-inch-thick glass practically vanishes, respecting the integrity of the two-story-high window that soars upward from the breakfast nook below. Windows throughout the house are either high-tech mirrored glass that cuts down the sun’s damaging rays by 90 percent or shoji-like fiberglass panels with custom-colored interior insulation. The master bedroom’s balcony—made from incredibly light, yet strong perforated resin—resembles an aluminum subway grate, allowing sunshine to filter through to the terrace off the ground floor below. The all-in-one, shower-in-the-floor wet room, or master bath, is clad primarily in a pale putty-colored Corian. 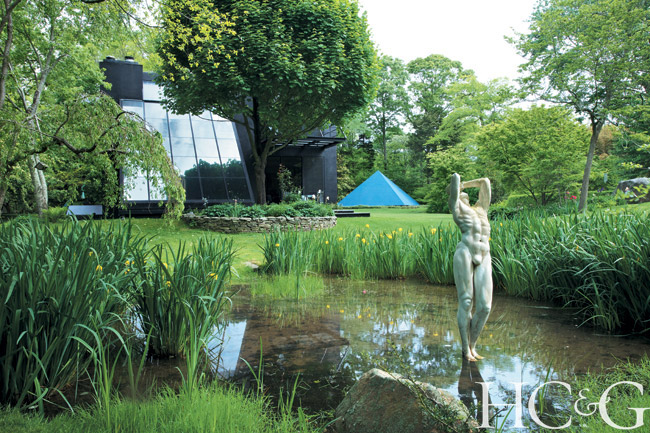 Although Phillips’s signature is deeply etched into the house and studio, the architect argues that “it wouldn’t be as successful without the topography and the landscaping.” For the most part, he has left the gently rolling property’s forest and wetland as is (he first spied it from a small airplane), judiciously enhancing the grounds with natural-looking plantings of peony and iris. By happy accident, the pool size was determined by Southampton Town officials, who allowed him only 250 square feet because of wetland setbacks. Recalling the round pool at Jack Lenor Larsen’s Round House, Phillips designed a circular plunge pool with a narrow slate coping. (During a recent tour of Philip Johnson’s Glass House in Connecticut, he was happy to see a round pool amid all the rectangles.) Phillips has even incorporated an evergreen “stop” from each of the property’s primary vantage points: “In the summer, there are lots of deciduous trees and shrubs, but I didn’t want bare vistas in the winter, so from each walkway or window there is an evergreen at the end of the sight line.”

As for the pyramidal studio building, Phillips was equally exacting, not wanting to create a structure that represented work. The result is a volume that more closely resembles a solid mass or a modern garden folly. It is also in perfect alignment with the two-story-tall bay window that graces the front of the house—which, by the way, Phillips sited on a true north-south axis, so that the sun arcs directly above it all year long. Yet another detail to behold in a meticulously plotted, deeply thoughtful machine for living.

A version of this article appeared in the August 15 2014 issue of Hamptons Cottages & Gardens with the headline: Every Size and Shape.