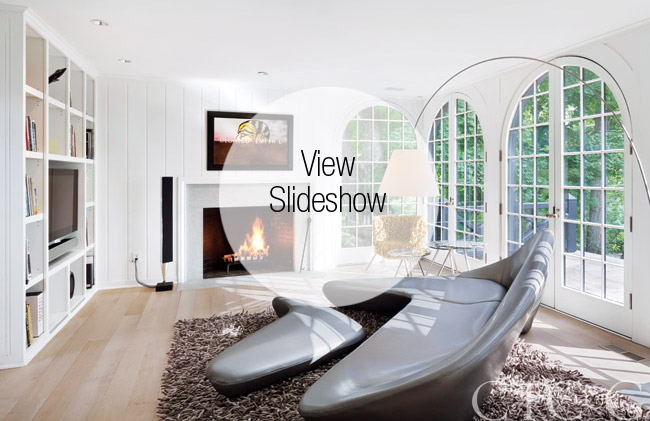 Architect Roger Ferris is uncommonly poetic on the subject of renovation, a topic not known for its inherent lyricism. “It’s almost like adding another chapter to a novel that’s already been written,” Ferris says, speaking both of the process of adaptive renovation generally, and his Weston Tudor-house-turned-hybrid-modernist-residence specifically.

When Ferris found this authentic 1910 Tudor, he gracefully accepted the challenge of renovating the 8,000-square-foot historical structure into something that could fit his family of six. They spend much of their time in a just-finished, super-contemporary Bridgehampton house, so this building—with its heavy Tudor detailing and dark palette—was a shift. Thankfully, Ferris happens to enjoy historical structures and is able to seamlessly incorporate old with new. His clients frequently ask him to do something that’s both historical and contemporary, so “there’s always something of that duality involved.”

A narrative thread—of duality, of old-and-new, of landscape and territory—starts to evolve. “Before I start designing, I write a short story,” he says. “It forces the project to a kind of discipline before I even put a line on paper.” That line-on-paper is such a commitment to both a shape and an idea that he finds it “much more compelling to keep the ideas buoyant for the longest period of time.” If he can’t verbalize it, he doesn’t start drawing it—an opposite approach to that of most architects, who think best through sketches or watercolors, who process iterative designs through series of drawings rather than groupings of words.

What was the story here? “It was about additions,” Ferris says, and lists all of the ways he added to the existing structure: the sunroom, the monumental south-side terrace, the master bedroom, and the moldings and details that had been completely removed during an older renovation. “I found them in drawings, redrew them and modified the house for my own use,” he says. But he kept the original architect’s “lyricism.” Ferris compares the process to two screenwriters writing together. “I liked the notion of a picturesque Connecticut house that shows home and heart and warmth and substance and whimsy,” he says. “Tudor houses are really quite whimsical. So I fast-forwarded a hundred years, with a sense of whimsy, but with a contemporary lens.”

That playfulness appears mostly through the spectacular art collection, much of which is heavy on language-based pieces (Jenny Holzer’s projection photographs; Robert Indiana’s Hope, which hangs above the aviation-themed dining room; Dutch artist Tim Ayres’ “Love”-themed piece in the master bedroom). It also creates an environment in which a Zaha Hadid–designed sofa seems completely usable for a bunch of kids. Further whimsy is in the re-introduction of the details that appeared in the original Tudor construction, and in Ferris’ decision to paint them all white, offering what appears to be at first glance a white-box gallery background for his colorful art, and at second, a profoundly historically sensitive—yet playful—nod to the house’s past.

Ferris was also sensitive to the needs of his family. “Everything had to have a kind of practicality to it, and I wanted the art to be appealing to my kids and to their friends,” he says. “I wanted it to be not so serious, yet also meaningful.” That explains the 17th-century grandfather clock made entirely of wood that offers a whimsical temporal counterpoint to the contemporary Tudor cabinet by Jaime Hayon for Established & Sons, or the Xavier Veilhan aluminum riff on an entrance-hall knight sculpture, to the wood Campana Brothers’ chair that perches next to that sculpture.

The house offers a complicated story,  and it’s one that Ferris tells well, both verbally and visually. The original architect may not have envisioned Ferris’ post-game addition to his novel, but it’s clear, nevertheless, that the finished result is a page-turner.

A version of this article appeared in the October 2014 issue of Connecticut Cottages & Gardens with the headline: Defining Duality.