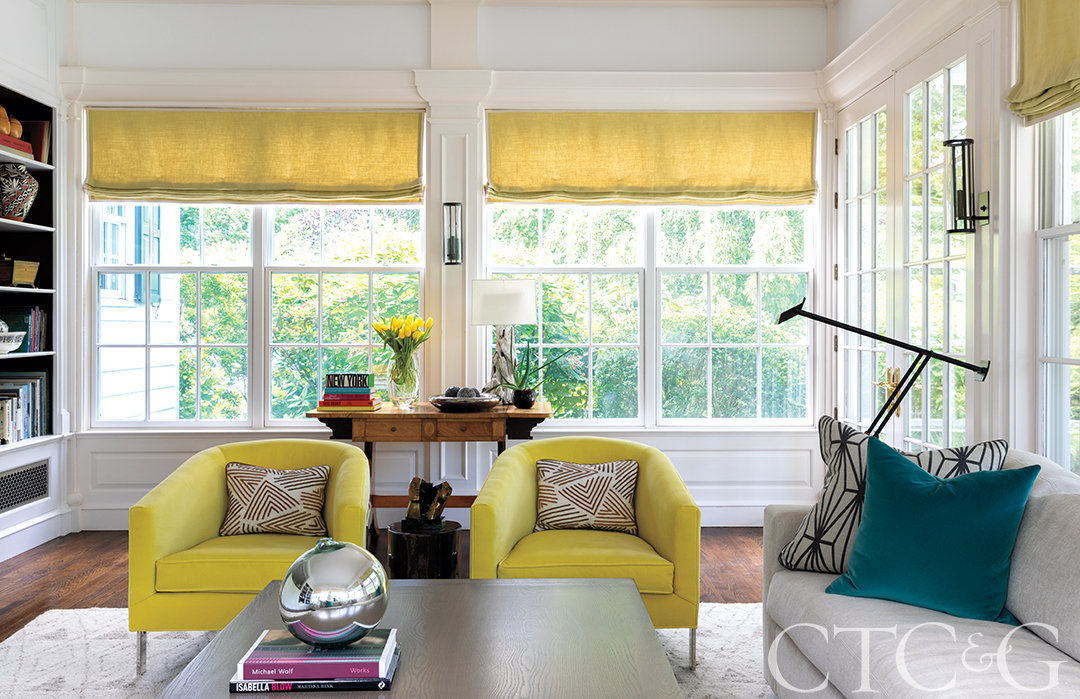 “I love what I do, so it’s hard not to be always doing a little something at home,” says architect Susan Alisberg referencing her own classic Greenwich colonial. Over the course of nearly three decades, those little somethings—a new front portico here, two enlarged bay windows there—have amounted to a total transformation of the 1949 residence she and her husband purchased 27 years ago. “It was a tired house on a pretty piece of land, and we saw it as an opportunity to create a family home and raise our children here,” Alisberg notes.

Central to that goal was removing the existing kitchen and a former family room addition and starting over. “The architectural spaces were reconfigured to create comfortable rooms for the family as well as great spaces to entertain,” says Alisberg, noting the sunroom is meant to resemble an old enclosed porch, and her kitchen rendition received a facelift about five years ago that included fresh paint, new tile and black granite countertops. “I love to entertain, so during the original renovation, the length of the dining room became the width creating ample space to host groups of family and friends.”

The upstairs expanded to match the added space below and, excepting the raised master bedroom ceiling (“The only thing we kept,” she says), all the interior trimwork is new as are the exterior shingles. “We reshingled the entire house but kept the original rough shakes above the front door,” says Alisberg, who launched an equally exhaustive redo of the landscape where a badly detailed wood deck and a flight of steps led to a yard filled with overgrown pines. In their place, a series of steps now descend through new terraces and a porch before reaching the pool. “We wanted to embrace the landscape, and in the summer, we live on that porch,” she adds. 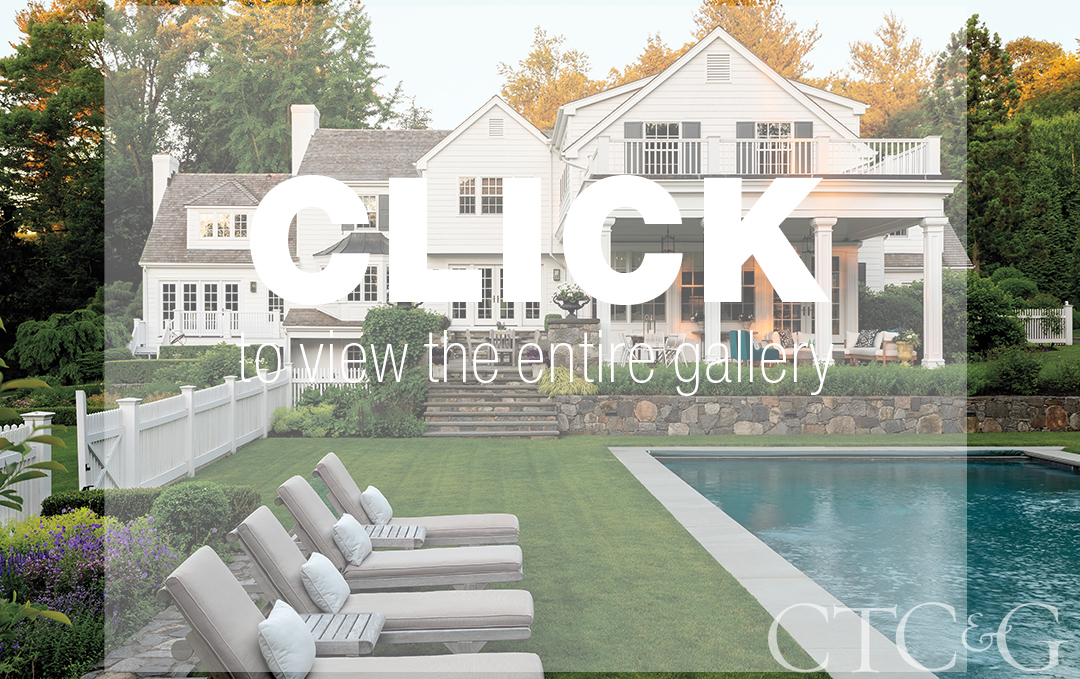 In concert with landscape designer Randy Ragasto, layers of greenery and color emerged with spherically clipped boxwoods hedges on the front manicured to match the formality of the architecture, and outcroppings of hydrangea, white roses, and white flowering magnolias softening the stone retaining walls and crisp white fences on the pool side.

Over the decades, Alisberg has continually tweaked the interiors to correspond with evolving tastes and the ever-changing needs of a growing family. “Twenty-seven years ago it was all antiques,” she admits about her design choices that were more closely aligned with the home’s architectural countenance. “Over time, I have pared down the moldings and opened up the rooms. New paneling and a black marble fireplace surround give the living room a more contemporary feel.”

In keeping with the modern shift, items like side chairs with horned arms and a coffee table with a clean gold-leaf edge, for example, provide counterpoints for a green velvet Swedish reproduction bench and an antique area rug in the same space. “The bench was originally in the upstairs hall, but I’m constantly moving things and that was the beginning of bringing green into the downstairs color scheme,” she says.

That idea translated into dark teal drapes in the library, where a similarly toned custom banquette complements an armless kelly green chair. In the home office, formerly the playroom, it’s an orange armchair that provides the jolt. “Pops of color in predominantly neutral rooms is a consistent theme,” explains Alisberg, who enlivened the sunroom with a pair of chartreuse armchairs and then further emboldened the spaces with artwork that responds to Alisberg and her husband’s shared passion for contemporary art and photography. Mementos from their extensive travels—such as a a pair of sconces from Morocco that flank the living room fireplace and statues of monks from Vietnam holding court in the library—add another layer of interest and personality.

As for inspiration, Alisberg notes: “I observe everything around me and find myself inspired every day. I love beautiful things, so the house is really a pastiche of what I like.”

A version of this article appeared in the October 2018 issue of CTC&G (Connecticut Cottages & Gardens) with the headline: A Rich Pastiche.