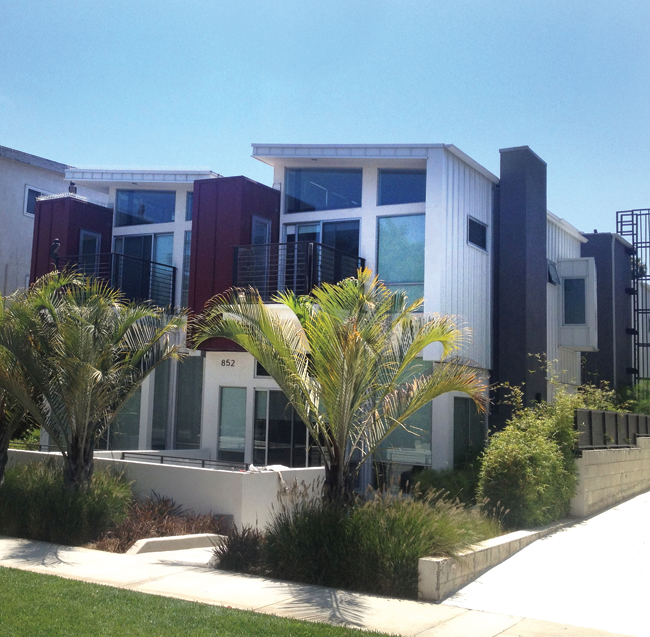 Right after the turn of this century, the architecture firm Lot-Ek published a monograph called “Urbanscan” and gave a series of lectures. A highlight of one of them (I was there and can still remember this) was its exploration of the uses of a shipping container—as museum, as restaurant, as home. The concept of adaptive reuse hadn’t yet been massively popularized by the combination of need and style, and the idea of using a shipping container as architecture frame—or even final project—verged on shocking. Today, not only is it not surprising, but architects and developers from coast to coast are starting to explore just how possible the work really is.

Shipping containers, of which about 20,000 arrive in the U.S. each day, were standardized mid century and are (almost) always made of corrugated weathered steel, are eight feet in width, eight in height, and either 20 or 40 feet in length. And those sizes are immovable.

“The reality isn’t always as simple as the idea,” CT architect Jonathan Wagner says, pointing out that the practicalities of turning shipping containers into living spaces means that, no matter how you configure things, you’re likely to have an extremely limited area. “You’d end up with a lot of long linear spaces, and those are very tight for conventional living,” Wagner says, “which is not to say it wouldn’t be a wonderful exercise for any architect.” He says it’s tough to imagine a shipping-container house providing anyone with their main living space, but offers a romantic challenge in its being someone’s secondary home.

Leslie Horn sees things from a completely different perspective. Rather than focusing on the possibilities of turning a few shipping containers into a thoughtful architectural exercise, the CEO and founder of development company Three Squared and its shipping-container research arm, Cargolinc, is interested in larger-scale opportunities. The real estate market crash of 2008 forced her to think laterally about development options, and she came up with the idea to work with the relatively inexpensive (they run about $5,000–$15,000) shipping containers for a Detroit property. While researching options, she found that typical architects felt constrained by the limitations of the shape. “People were using traditional-built systems and shoving them into a container, which doesn’t work efficiently,” she says.

So Horn created Cargolinc, whose researchers came up with a way of using the sides of shipping containers as framing, allowing for much more architectural flexibility. Her company is working with architect Eric Lloyd Wright, grandson of Frank Lloyd Wright, and is currently developing multiple projects across multiple scales—eveything from hydroponic grow pods to a 4,400-square-foot mixed/use space in downtown Detroit, to a clinic in Los Angeles, to a 200-unit assisted-living facility in Dallas.

A version of this article appeared in the May 2014 issue of Connecticut Cottages & Gardens with the headline: The New Cubism.

Browse More Articles from the May Issue