Contemporary to classic architecture dominates the landscape in Connecticut. 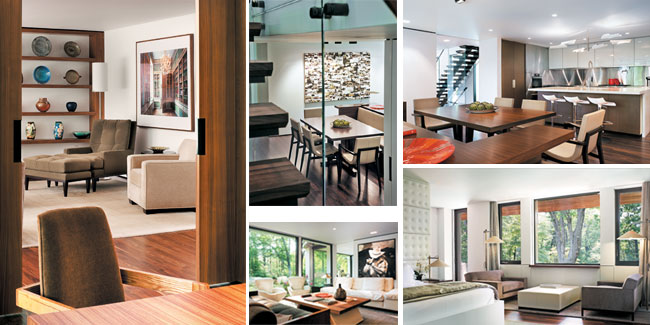 Through a unified design concept, the architect successfully transforms a 1950s brick Colonial into a simple, functional and exquisitely beautiful home

In the summer of 2008, a mathematician and a marketer hired Joeb Moore to completely reconfigure their New Canaan house. He took it from something that Moore describes as “quite eclectic and ordinary” (a seemingly oxymoronic description that makes sense against the backdrop of the uninspired pastiche, inconsistent brick-and-clapboard siding, and confusing entry points the couple’s existing house featured) to something “that’s much more unified in terms of its relationship to landscape, to program, and to architecture.” Moore, a devout conceptualist who slips deep historical and theoretical thought into all of his work, considered the project in three parts: interior, architectural shell, and landscape.

Rather than tear it all down, the architects were able to “encapsulate the existing house completely,” as Moore explains. They took down every single wall, save for a single interior box that became a teak-lined sitting room on the interior and a series of white gallery-style walls (the couple are avid collectors) on the exterior. That box then became the center point for the collection of living areas that Moore calls “a pinwheel around this grounded teak jewel box,” all enclosed in an entirely new exterior. On the back, eight-foot windows delicately framed by dark wood beams open the house onto a winding expanse of nature (and bring the outside in). While on the front, a crisp yet materially rich combination of white stucco and teak introduces the interior aesthetic to come.

By working around established oak trees and using the existing footprint, the architect created a new home that soars into the tree tops

Creating a summer lake house just six miles from the owners’ regular house put Christopher Arelt, owner of Nautilus Architects, at both an advantage and a disadvantage. Advantage: total familiarity with the landscape, easy access to the clients. Disadvantage: It’s much harder to make something when you know it really has to stand out. Luckily, the clients had an idea of what they hoped would contrast with their old-school Colonial just up the road. “She pulls out a magazine with some funky house from South America with corrugated metal and glass and steel,” Arelt says. “That was just a dream come true.” A few weeks later, the architect showed up with a little wooden model of a three-story 24-by-24-foot tree house. “And that was it.”

The new structure sits on the footprint of the former house, which was torn down because it was, as Arelt says, a “hideous brick-faced New Jersey mafia place, a universally detested building.” The home rises two stories higher than the old one did. The top floor is taken over by a master bedroom whose ceiling is a direct counterpoint to the roof plane, with a view that extends over the treetops. It’s reminiscent of Philip Johnson’s New Canaan glass house (the architect famously said that nature acted as his wallpaper) and of John Lautner’s swooping forms (the Los Angeles architect is a huge inspiration for Arelt).

“There’s the feeling of being outdoors with nature,” Arelt says. “You’re just up in a tree house.”

from the exterior through the interior, the architect created a perfect marriage of formal and informal

A young newlywed couple called McKee Patterson of Austin Patterson Disston Architects to see if he could build them a house that expressed both the novel formality of their new life together, and the comfort and familiarity that can come with marriage over time. “It was their first house,” Patterson says, explaining the couple’s enthusiasm for a perfectly put-together structure.
It being their first house also explains the relatively limited budget the architects were faced with, leading to “rooms that were on the modest side.” To give the interior a sense of greater formality—and with that, greater permanence, perhaps—Patterson created exuberant ceilings, which beefed up the scale of the rooms.

A cupola in the front entry extends the vestibule two stories, drawing the eye upward into the area occupied by the master bedroom wing. From that front hall, two perfectly symmetrical doors are framed with molding that starts out impeccably detailed (and very evident) and becomes subtler and more recessed as the house extends farther back into the bright-open kitchen and the relaxed family room. “It’s all about creating shadows,” Patterson says of the way the moldings work in the house. “It’s just about new lines and new shapes.”

On the exterior, the form of a Colonial house meets a Greek pediment with square columns, while punched-out windows speak to a brief formality. “It should look welcoming,” Patterson says, “but at the same time very strong.”