For furnishings, Reid chose mid-20th-century classics that keep in step with UN Plaza's period glamour, such as a marble-topped oval Saarinen dining table and a vintage Eames chaise lounge. 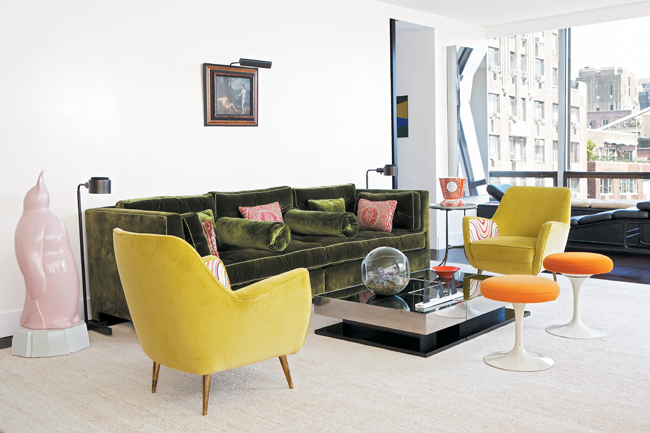 When they were erected in 1964, the nearly floor-to-ceiling glass walls sheathing 860–870 United Nations Plaza were considered a dazzling and daring new feature for a New York City apartment building. Quickly recognized as one of Manhattan’s premier postwar addresses, these twin edifices alongside the East River soon attracted a roster of bold-faced residents including Johnny Carson, Truman Capote, Kay Graham, and Dina Merrill. 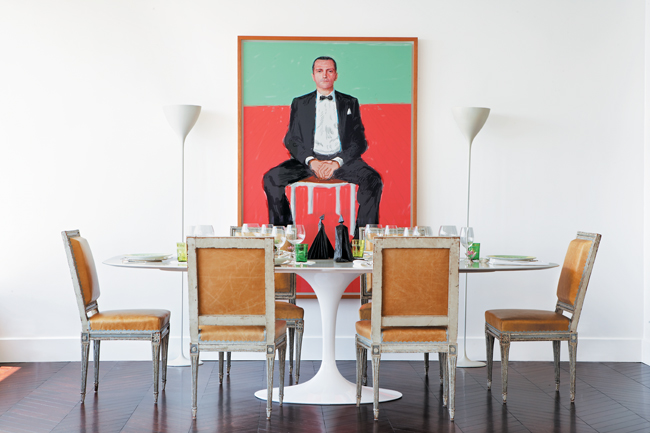 Nearly half a century later, when Eve Reid and Warren Weitman saw a two-bedroom, three-bath residence for sale in 870, they discovered UN Plaza had not only aged gracefully, but remains forever young. For both, the building’s allure was partly nostalgic. In the late 1960s, Weitman, who is chairman of Sotheby’s North and South America, had a friend living here whom he visited frequently. Reid, an art consultant who is currently working on a long-term project with the artist Robert Wilson in Texas, grew up on Staten Island, where her father, John M. Murphy, was a U.S. congressman. She fondly recalls accompanying him on political trips and particularly remembers his visit to Bobby Kennedy’s apartment in UN Plaza. (Having spent time in Washington, D.C., Reid also likens the building’s architecture to the Kennedy Center by the Potomac River.) “UN Plaza’s design is elegantly rectilinear,” Reid says. “It is influenced by Mies van der Rohe and Le Corbusier, and has visual cues from Mondrian’s later paintings.”

Her longtime decorator, Tom Scheerer, agrees. “Either you buy this apartment, or I will!” he recalls telling Reid after she and Weitman had toured it. (For his part, Scheerer compares the building’s ageless glamour to that of Miami’s Fontainebleau Hotel.) With some advice from Scheerer, but working mostly on her own on this project, Reid focused on two primary goals. First, she wanted to enhance the scale and flow in each room, and second, she was intent on giving the illusion of height to the nine-foot ceilings. Accordingly, she raised six doorway lintels, opened up a passageway between the living room and kitchen, and covered the entire ventilation system with pietra cardosa granite, which also provides extra seating beneath each window throughout the apartment. Finally, a west-facing wall of the library was lined with smoked mirror, not only “doubling” the room’s size to the eye, but also better reflecting the 59th Street Bridge, which spans the East River just a few blocks uptown. 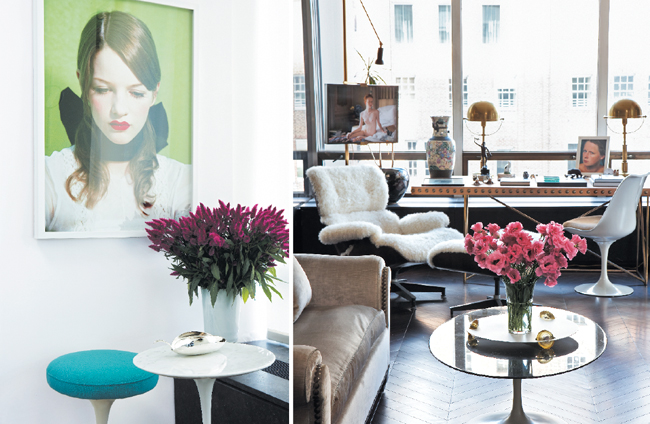 For furnishings, Reid chose mid-20th-century classics that keep in step with UN Plaza’s period glamour, such as a marble-topped oval Saarinen dining table and a vintage Eames chaise longue. Pop Art pieces from the 1960s and ’70s are displayed throughout, including lips prints on Mylar by Peter Gee, orange and silver acrylic-lacquered aluminum panels by Don Dudley, and artwork by Roy Lichtenstein, Victor Vasarely, and Milton Avery. These earlier works are juxtaposed with up-to-the-minute contemporary art, including photographs by Alex Prager and Mona Kuhn and sculptures by Kara Walker and Sebastian Hempel.

These exuberant aesthetic choices might suggest a somewhat freewheeling approach to decor, but Reid takes great pains to describe how precisely each detail was thought out in advance, and how every vantage point was considered and reconsidered. “I am patient and willing to work to achieve an ideal result,” she says, gesturing toward a large David Hockney inkjet-printed computer drawing of a tuxedoed Jean-Pierre Gonçalves de Lima, the artist’s U.K. studio assistant, which hangs behind the dining table. “Deciding where to put him, for example, was a three-month consideration.” 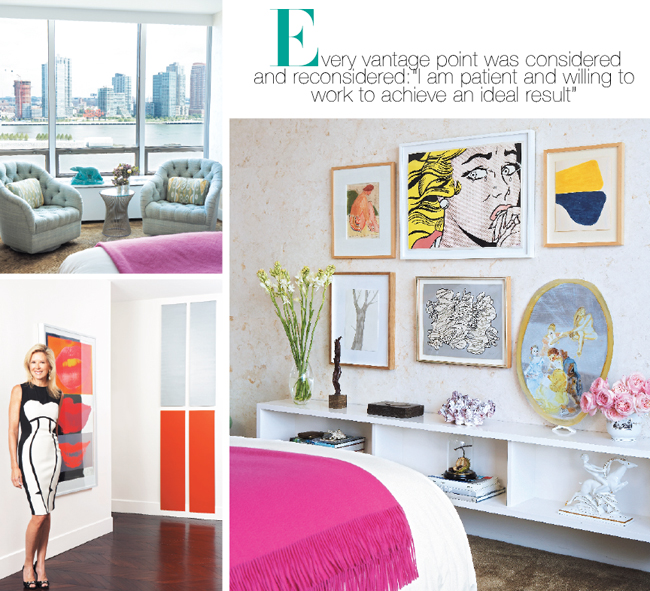 But despite all the exacting care, Reid cheerfully acknowledges that what makes her apartment most spectacular is its breathtaking views through those walls of glass. Spread out below is a broad expanse of the East River, Long Island City, and the Four Freedoms Park on the southern tip of Roosevelt Island, designed by Louis I. Kahn in 1973 and slated for completion next month (it’s the only project by the architect to be built in New York City). “It’s a visual essay that’s constantly changing, morning, noon, and night,” Reid says of the vista. “Best of all, when I lower the shades, it looks decidedly like one of Gerhard Richter’s early diffuse paintings!”