At Old Farm Nursery, a Husband-Wife Team Created a Lush Landscape with an Inventive Hand 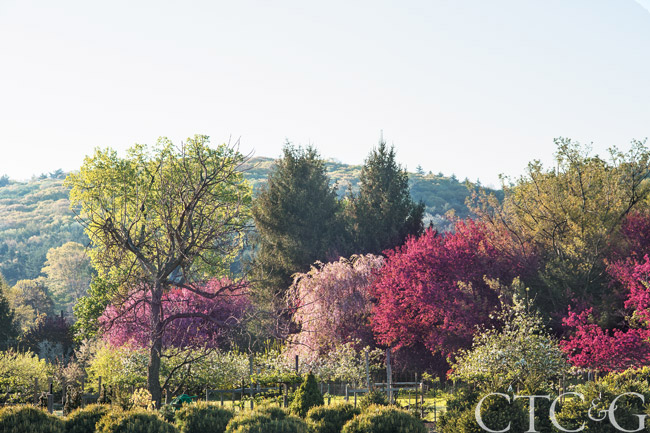 When Judy and Patrick Murphy decided to relocate to New England from West Virginia 25 years ago, they knew exactly where they wanted to live. “I was a camp counselor in Litchfield County as a college student,” says Judy. “It’s the type of geography that captures your soul.” The couple found a 15-acre farm in Lakeville that was orphaned for 10 years and neglected for many years preceding that. “It was perfect for us,” she says.

Whipping their newly purchased acreage into shape was business as usual for the husband/wife landscaping team. They tore down the most derelict barns, hacked brush and began putting in gardens. Of course, they had to call in specialists to update the house with a few little necessities—like functional plumbing. But the affable Murphys make friends and connections rapidly. So, the plumber they hired to bail out their leak issues became the first of many landscape-design clients. Two hours from New York City and deep in the pastoral Berkshire Hills, Old Farm Nursery was ideally situated for the couple to practice the gracious, traditional landscaping that has become their specialty. 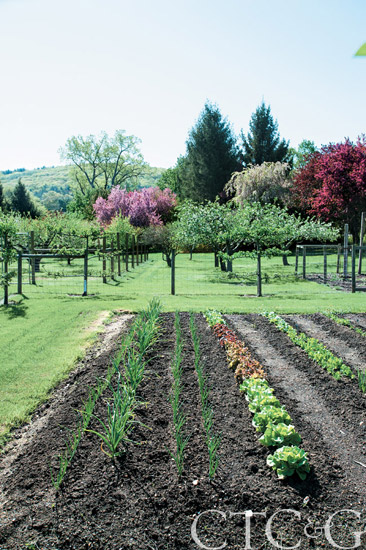 With a toddler in tow and pregnant with their second child, Judy soon began feathering their nest. After the season was over, she grabbed any leftover trees from the nursery to install around the house. At first, safety for the children was the main focus, which explains the mature hedges buttressing the road. But gradually, she began to conquer land. Taking her cue from the old farm, the emphasis was on rust and architecture aged with grace, given a sophisticated spin.

As the garden gained momentum and character, the tie-ins to the nursery went from utilizing surplus to first dibs on arrivals. That’s how Judy nabbed the set of crabapples branching at exactly the same height to join branches above the windows of their farmhouse. Meanwhile, Patrick brought his trained eye for selecting inimitable specimen trees to the table. Dappling the landscape with the shapely presence of the crème de la crème, he found fruit trees to echo further nursery beds and orchards. Each tree has just the right curves and is clad in a veil of blossoms by mid-May. Espaliered trees accent picket fences. Vintage rototillers serve as focal points. Always, the geometry is balanced against the sheer lushness of fresh, new growth. And everything is immaculately groomed. 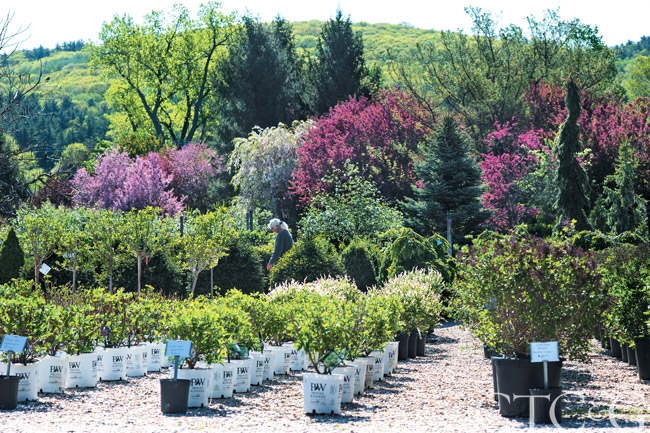 Old Farm Nursery is particularly enchanting in May. That’s when the Murphys gear up for the Trade Secrets sale at nearby Lion Rock Farm in Sharon. The nursery is a vendor at the show. But with its black tulips running riot through Solomon seal, wisteria climbing up an old silo, and spring bulbs poking through unfurling fern fronds, Old Farm Nursery tends to pull gardeners off of the road like a magnet. And the Murphys donate a portion of all of their sales from that day to Women’s Support Services, the beneficiary of this charitable event. Customers can ramble in the nursery and in their adjacent home garden. Befitting a farm, that means peas are poking their heads up, lettuce is forming tight little buns, and the apples are veiled in blossoms. Call it agriculture with an attitude, and it’s certainly an eyeful.

A version of this article appeared in the May 2014 issue of Connecticut Cottages & Gardens with the headline: Agriculture (with an Attitude).