At Their Home in East Hampton, Artist Billy Sullivan and Curator Klaus Kertess Fully Embrace the World That Surrounds Them 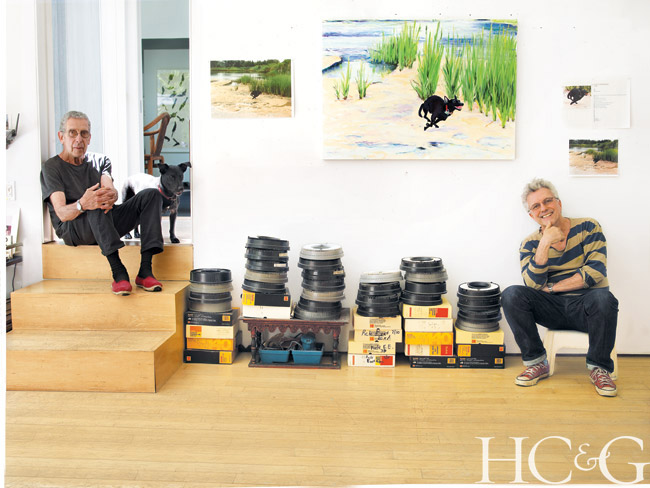 At first glance, the East Hampton home and studio of artist Billy Sullivan and his partner, curator and author Klaus Kertess, is really just two boxes with several more rectilinear spaces tucked inside it—just like one of those Russian nesting dolls. That’s all there is, it seems, until one sees the goldfish darting about in the tank garden that separates the living quarters from the newer studio. Or notices the dove-gray paint color that emphasizes the lowness of the dining room and kitchen ceiling, in tantalizing contrast to the adjacent soaring white living space, where a substantial mural by David Novros plays on reflections from the windows. Or realizes that the art and furnishings inhabiting the home are a carefully vetted collection of pieces from the past several decades, a handful of antiques, and a superb array of textiles in warm colors, rather than a mishmash of finds from summertime tag sales. 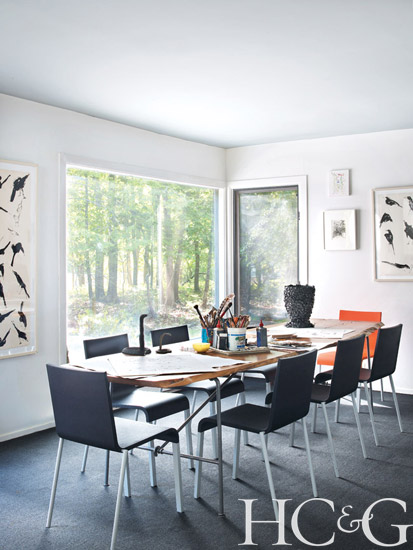 Even so, one might still call it uncomplicated, and describe Sullivan’s work that way too. The artist himself is casually offhanded about most things, describing his straightforward, yet deceptively complex portraits as “diaristic, they’re just people around me.” He typically depicts his circle of intimates in thin washes of oil on gleaming white canvas or chalk pastel on paper. “It’s about my friends,” he continues. “Sometimes they’re in the art world, you watch what they’re doing, and it’s really interesting.”

Built more than two decades ago, Sullivan’s two-story studio is a cement-colored, stucco-clad block that’s oddly in sync with the original 1972 cedar house built by Kertess before the two men got together. Architect Mark Kaminsky’s structure provided Sullivan with both a sizable new art studio as well as a shallow office space tucked behind it. Pinned up along the length of the artist’s messy desk (another deception: He is exceedingly well organized) are photographs, large and small, of friends, family, and clients, all of which serve as inspiration. “My photographs are my sketchbook, because I use them all the time,” says Sullivan, whose work is included in the collections of major arts institutions and who teaches at both New York University and the School of Visual Arts. “I can always return to them. Linear time doesn’t matter.”

When Sullivan first moved in, he painted in the dining room of the main house, and somewhat unexpectedly is doing so again. Just outside the window is a cast-stone birdbath and a birdfeeder or two, and in the early mornings, Sullivan makes ink-on-paper bird drawings, watching the winged creatures and noting their balletic flight patterns. The drawings are both graceful and sinister. A crimson cardinal flitting about outside the window, for instance, doesn’t have the same appeal once it has been rendered in inky black on Sullivan’s sheet of paper. 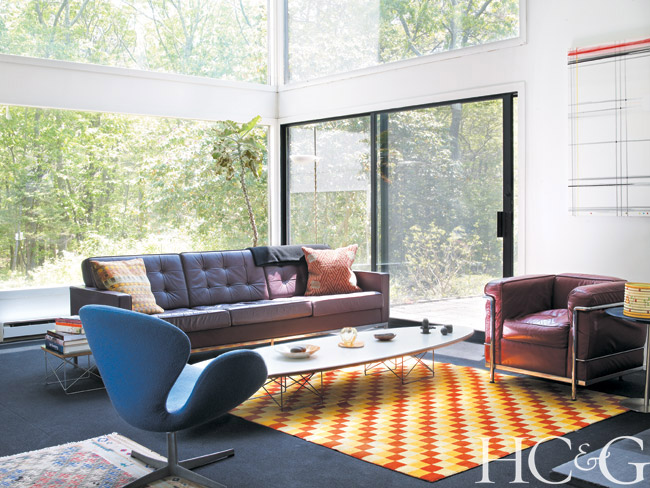 Sullivan has also turned his hand to creating wall coverings for Studio Printworks, most recently a design featuring homoerotic drawings of a man in various poses. “I can get obsessed about a person,” he says. “I get the muses every once in a while, like the guy in the wallpaper who was the muse in my life for five years.” Repeated over and over again, the figure starts to look like any other pattern—harmless and routine.

This spring, Sullivan exhibited work at the Freymond-Guth Fine Arts gallery in Zürich, including a double-screen slideshow installation piece titled, appropriately enough, Time After Time.Sullivan has a deeply fluid relationship with the notion of time in all his work. “I have a visual mind, but it’s not linear,” he says. “I don’t forget a fucking thing, but if I didn’t have a computer, I wouldn’t even know how old I am!” At the 2006 Whitney Biennial, the artist added photography to his repertoire in the form of a three-screen slide installation. “The slideshows are mostly people and still-life photographs. I like the interaction that happens—they play against each other in an interesting, provocative way.” 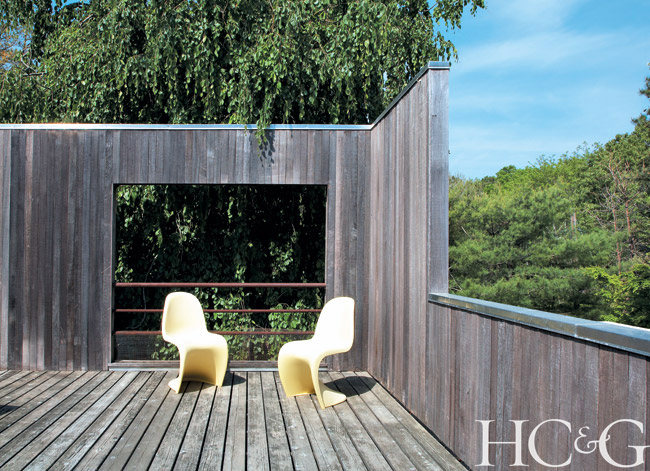 But the artist is not one to deny that time changes. He started coming out to the Hamptons in 1971, “at the tail end of that art-y period,” he says. “We used to go to Jane Freilicher’s, and John Ashbery would be there. Once Stephen Mueller had a sleepover at Fairfield Porter’s house while Porter was in Maine. That catatonic poet Jimmy Schuyler, whose work is just amazing, was there, and my favorite, Ruth Kligman, was there in a Schiaparelli nightgown. Not that there aren’t lots of people still here, younger people like Eric Fischl, David Salle, Bryan Hunt, and Joe Zucker. But now that world I’m talking about seems to have moved to the North Fork. At least the hip young kids.”

A version of this article appeared in the July 1, 2014 issue of Hamptons Cottages & Gardens with the headline: An Artful Life.