Fall in New York wouldn’t be complete without antiques shows. The October Avenue Antiques Show lived up to its promise of bringing in dealers from around the world with furniture, jewelry and accessories of the highest quality.

At Dallas Boesendahl’s booth, I was stopped in my tracks by a display of flat jade discs known as bi. They were mesmerizing in simplicity and color. The Manhattan-based dealer (by appointment only, 212-308-7029), well known to his clients for having accessories of the highest quality, explained to me that these wafer-thin jade discs were from the Neolithic period and were made and used in China as ritual objects. They symbolize the heavens and were made entirely with hand tools, taking months to produce. Each was unique in variegation and depth of color, ranging from amber to wheat to dark brown.

At a corner booth, the works of Michael John Hunt hung in large black wooden frames. I was fortunate to have a moment to speak with Hunt about his work, which is known in England as figurative painting. “The light is very, very important. It brings life to everything,” said Hunt. “If you have an active imagination, you bring an awful lot more to the work as well. It’s not just what you see, it’s your imagination that adds an extra dimension to the painting.” He manages to draw viewers into his environments with the use of high contrast, which, according to Hunt “excites the eye.” One has the sense that the painting possesses its own atmosphere, cleaner and brighter than our own. Under each painting is a painstakingly detailed drawing (Hunt is trained as an architectural draftsman). “If the drafting is off, the painting fails,” Hunt explained. The Hunt Gallery is located at 33 Strand Street, Sandwich, Kent, UK, 01-304-612792, thehuntgallery.com.

The October Avenue Antiques Show
lived up to its promise of bringing in dealers
from around the world with furniture, jewelry
and accessories of the highest quality.

Il Segno del Tempo (Via Fiori Chiari 20, Milan, ilsegnodeltempo.com) occupied another corner booth. Curiosities from all over the world sat on shelves of industrial steel, lit by huge factory ceiling lights. Amidst the momento mori of a skeleton carved in ivory and the fanciful iron furnace pipes mounted as sculpture, I noticed a fully articulated hand-forged iron glove from a suit of 18th-century European armor. It was perched strategically atop a flaking column capital, a fragment from a long lost palace perhaps. Il Segno del Tempo specializes in wunder camera, a fascinating peek into the collections of 17th-century European royalty who collected obscure things made from narwhal horns and rare coral, to clocks and scientific instruments. With two galleries in Milan, Il Segno del Tempo splits its inventory into two distinct categories: industrial and wunder camera with memento mori (Latin for “remember your mortality”) and Grand Tour and science-related antiques. 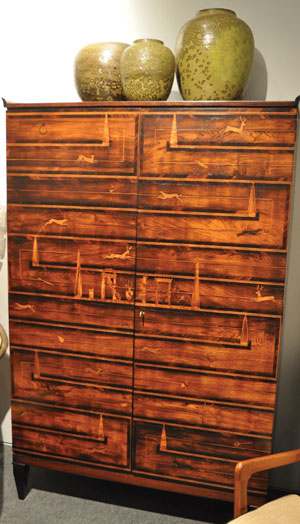 I was awestruck by a marquetry armoire by Tomoso Buzzi, c. 1929, in the booth of Gary Rubinstein Antiques (3901A S. Dixie Hwy., West Palm Beach, 561-249-7095, garyrubinsteinantiques.com). The neoclassical design was hand-cut and inlaid with rosewood, fruitwood, walnut and ebony, giving the piece depth and sophistication. My eyes were drawn over the entire surface of the cabinet by a series of maze-like lines punctuated by running animals and obelisks, terminating in the center with an assemblage of monuments beautifully inlaid with burl wood. “It’s of the highest quality,” said Rubinstein. “It’s a take-off of Giuseppe Maggiolini, who was a master cabinet maker of the 18th century.”

Standing virtually alone in one of several booths belonging to M.S. Rau Antiques, (630 Royal St., New Orleans, 866-349-0705, rauantiques.com), was an ornate 16th-century Henry II walnut cabinet or dressoir. The wood carver’s mastery was evident in the caryatids, crests and delicately carved moldings throughout the piece. An almost identical dressoir is in the collection of the Frick Museum and was purchased from the famous firm Duveen brothers in 1916 by Helen Clay Frick, daughter of the steel magnate Henry Clay Frick for $110,000. M.S. Rau is known for its outstanding selection of rare and important antique furniture.