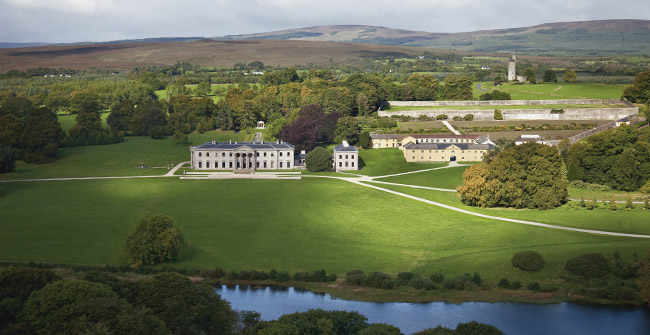 Fans of Masterpiece Theatre with a yen to experience the genteel lifestyle of a country house now have a chance to play the role at Ballyfin, the ancestral home of the British Coote family, recently transformed into a small, exclusive luxury hotel. Detail by detail, a Chicago businessman has collaborated with a noted Irish designer to convert the Regency limestone mansion into a boutique inn.

About 10 years ago, after restoring an historic residence in Kerry with his Irish wife Kay, Fred Krehbiel, chairman of interconnect products manufacturer Molex, was eager to take on another project. Ballyfin, an early 19th-century mansion, had been battered by nearly a century’s use as a Catholic college occupied by resident members of the order of Patrician Brothers. Situated on 614 acres enclosed by stone walls in the Midlands center of Ireland, it was dilapidated, but just the “pristine ruin” they sought. Partnering with design consultant Jim Reynolds, Krehbiel set about restoring Ballyfin to elegance.

Starting with the Welsh slate roof, they put a halt to rain washing plaster off the walls and buckling the inlaid wooden floors. Sacks of chips saved by the conscientious Brothers were pieced back into the original marquetry patterns. Mahogany doors and window frames were restored. But the charming curvilinear Victorian conservatory was so rusted it had to be dismantled and sent to England for restoration. Outdoors, a 40-step cascade was installed, its falling water enhancing views from the house. The quest for perfection extended to the fountain, which was relocated by two feet in order to line up with the library’s central bow window. 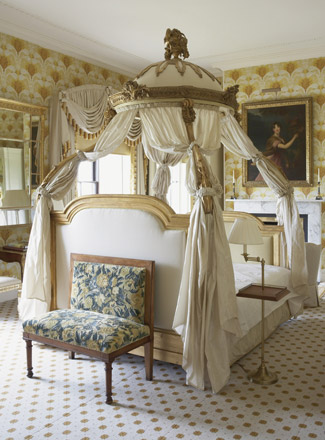 Where blackened timbers had once fallen through the ceiling, an ornate frieze, one of the great achievements of Irish decorative plasterwork, now circles the gold saloon. The elaborate inlaid floor of the rotunda, its design patterned on the Alhambra’s Lion Court, has been restored to the glossy surface where 19th-century Coote children used to set up their model trains. Replacing rows of dormitory sinks and the Cootes’ only flush loo are elaborate baths installed in the suites, each fitted out in marble with English plumbing, towel warmers, and original art such as a collection of wax seals mounted over Lady Caroline Coote’s spacious tub.

In consultation with Colin Orchard, former Colefax and Fowler interior designer, each room was fitted with chintzes in traditional patterns, Irish, English and French antiques, and collections of paintings and porcelain. Fifteen exquisitely appointed bedrooms are decorated individually with fine art, furnishings and fixtures: a Corona canopy bed in the golden Westmeath Room; Chinoiserie wallpaper in the Sir Christopher Coote Suite; Richard Rothwell’s masterpiece mother and child Admiration in the Mountrath Room; a fine mahogany George II secretaire in the Butler Room.

Coote family members offered original family portraits, including a charming 1825 portrait of the four Coote children frolicking with a wagon, which dominates a wall in the gold drawing room. The Krehbiels’ collection of Irish Delft porcelain fills a breakfront in the Whispering Room, and the downstairs men’s loo sports a full wall of vintage British political cartoons.

Guests enjoy cocktails in the drawing room or read in front of a fire in the library. There’s a swimming pool, exercise room and golf courses nearby. The grounds offer fishing on the lake, clay pigeon shooting, hiking and biking. While a staff of 50 attends to every need, guests are not allowed to tip. Say the owners: “The aim is to feel as if you’ve been invited for the weekend.”