For an art-collecting couple with a penchant for purple, Ross delivers a home where the hue takes precedence without being overpowering. 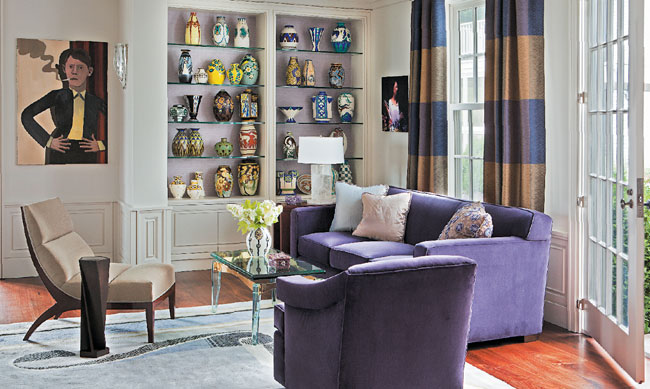 this art-centric couple knows all about color. Because of their ever-growing collection of art, they live among the palettes of artists such as Cindy Sherman and Joseph Cornell, Kiki Smith and Louise Bourgeois. But for the wife’s own personal palette, she told interior designer Barbara Hauben Ross that she wanted one color, in particular, to appear throughout her home.

“The client, a close personal friend with whom I have worked on several prior and current residences, had one request before I started,” says Ross. “She wanted to use a deep shade of purple.” 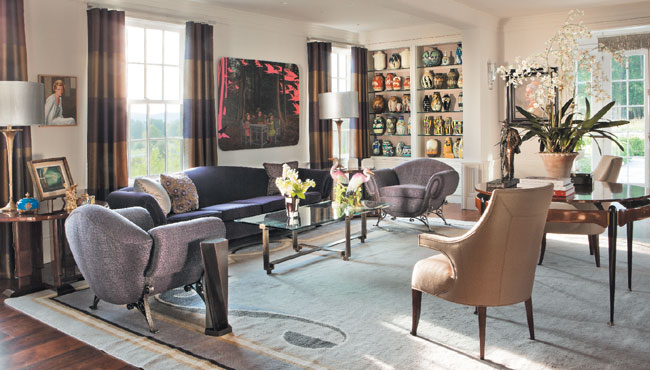 Upon stepping into the expansive combination living room–parlor in the 8,000-square-foot neo–Colonial–style house, purple takes precedence—purple sofas, purple armchairs, and, more subtly, as a broad band in the draperies. “The challenge,” says Ross, “was how to modify it, so that it doesn’t become the only color you see.” Ross managed to indulge in that hue, while also merely referencing it. Shades of purple appear in a custom-made Beauvais carpet while, elsewhere, the soft grays of the furnishings are close, complementary cousins.

The client wanted the house to reflect the passion that she and her husband have for art, while also revealing who they are apart from their collection. “She wanted every room to be inviting, to be available for entertaining, which they do often, and wanted no space to feel like a museum,” notes the designer. Ross’s colleague and company vice president Lauder Bowden adds, “Nothing is presented in the house as overly precious, even though it is a rich assortment of furnishings. You don’t need a tie and jacket to sit in the living room.” 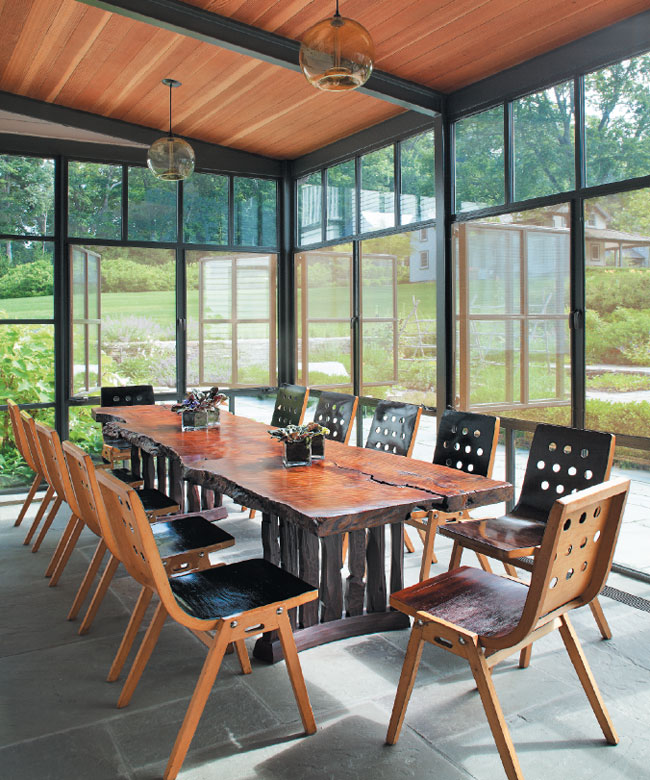 Ross says that the husband gave her the highest compliment: “He told me how much he loves sitting and relaxing in every room. ‘I go from room to room just to enjoy each,’ he said. ‘I’ve never been inside a home I’ve enjoyed more.’”

Another client request was for toile to appear somewhere in the home. Ross’s solution was to cover the walls, furniture and even the ceilings of the solarium in a classic gray-mauve toile—a hue that references the pops of purple in the adjacent living room.

Although the house is a decidedly traditional form, the designers were intent on, as Ross says, “making it into a contemporized Colonial,” in keeping with the architectural work done by Steven Learner. In the dining room, Ross positioned a custom-made table featuring three attenuated bronze bases, to accommodate varying sizes of dinner parties easily. Andrée Putman–designed chairs are set in place. Two Italian mirrored consoles
marked by crossbrace-like designs, and upon which rest collections of mercury glass, anchor a fireplace. Ross purposely positioned a mirror on the diagonal to echo the lines of the consoles. 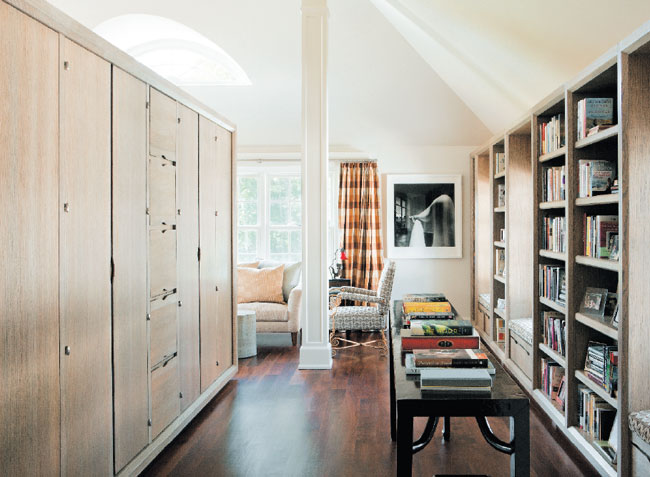 Perhaps the most contemporary moment in the house, though, occurs in the clients’ upstairs office, a room defined by walls of multipaned windows. When she turns to her computer, a mirrored wall there ensures that views of the hills remain as inspiration.

Art figures in the house in serious, intellectual ways, but more importantly, in a casual manner. Atop the main stairway landing is an assemblage of thank-you cards, sent by notable artists, to the clients for their work on their behalf. The bright, vaulted master bedroom works as a kind of gallery of objects, as well—though the most striking feature of all is Ross’s sleek upholstered closet wall, the opposite side of which doubles as an upholstered headboard for the bed.

“All of the elements in the house, the furnishings we assembled and the artworks they have, make for a sense of ease,” says Bowden. “I hate the word ‘elegant,’ but if you use it as they do in science to say that something is an ‘elegant solution,’ then I would say this house is exactly that.”