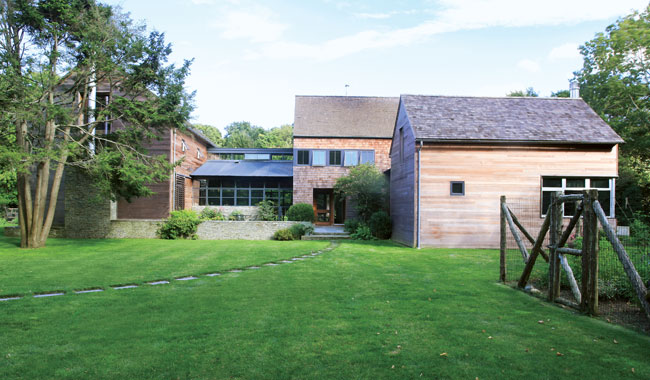 Like an alchemist, architect Alex Scott Porter took a 1980s shingle and sheetrock house and spun it into gold, converting it into a new dwelling with the rustic beauty of a vintage barn, the rigor of industrial design and the warmth and livability of an unpretentious country home. As if that weren’t enough, the house, tucked in the Amagansett woods, incorporates many green building principles, from its extensive use of salvaged materials to a geo-thermal heating and cooling system that pares the use of fossil fuels to a minimum.

The clients, a couple with three children for whom the TriBeCa-based Porter had previously designed a city apartment, envisioned a home that combined luxury with rural comforts and charm. “They wanted a house that was timeless in style and that would age gracefully,” Porter says. “And we wanted to challenge the idea that sustainable houses can’t be luxurious.” 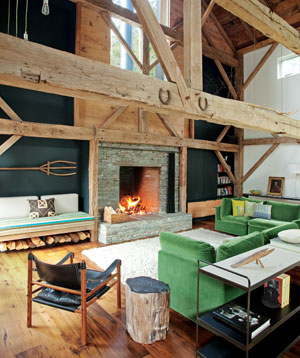 The result is three structures totaling 4,600 square feet: the remodeled original house, plus two new gabled buildings clad in shiplap cedar. Two additional components, made up largely of steel-framed windows, form the connective tissue that integrates everything into a single whole.

The larger of the two new wooden buildings is built around an exposed 1840s barn frame, a bold stroke that gives the main living area extraordinary presence. The antique timbers were used not structurally, but decoratively, to frame an expansive great room with a 20-foot peaked ceiling. The smaller structure, which contains the master bedroom, has the same iconic gabled form and mix of materials—concrete, patinated steel, limestone and reclaimed wood.

As for the existing house, rather than demolish it altogether, Porter modified it by removing three ugly additions and stripping it down to the main gable. With new windows, stair balusters and other upgrades, the two-story structure now contains children’s bedrooms, two guest bedrooms, a powder room, laundry and storage.

“Everything was done to save energy and avoid waste,” says Don Matheson, the East Hampton general contractor who worked closely with Porter on the house’s many custom details, including interior walls made of reclaimed hemlock and a floating metal staircase that connects the living room to a loft playroom.

The industrial aesthetic and the juxtaposition of raw and refined elements are hallmarks of Porter’s work. She designed the kitchen with such special details as whitewashed cedar walls, rift oak cabinets, an espresso niche wrapped in honed limestone and a concrete countertop with river pebbles in a sunken trough. “I envisioned it as a place to pot plants or arrange cut flowers,” says Porter, “but the guys who brought it in said, ‘Oh, that’s where the ice and beer go.’”

Natural ventilation was a priority. Heating and cooling is done with a geothermal water-to-air heat-pump system, which required the digging of deep wells. “The wells bring up 50-degree water, which goes into a geo-thermal heat pump and then into radiators, or is forced as air through wall vents,” Porter explains. “In summer it cools, and in winter you just have to heat it a little more, so energy bills are really low.” 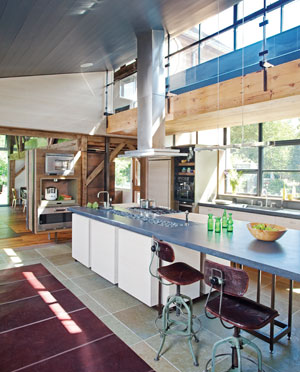 The furnishings are very much in keeping with the architecture. Jim Zivic, an upstate New York artist and furniture maker, provided many of the standout pieces, including a steel and leather hammock that hangs on a pulley from the living room’s soaring  ceiling and can be raised or lowered as desired.

Unlike the original house, which felt closed off from its surroundings, the glass expanses of the new one connect it intimately to its environment; the owners have replaced high-maintenance, non-native shrubs and trees with indigenous vegetation such as dogwood, amelanchier and highbush blueberry.

“The house is very open to the outdoors,” says Porter. “You’re always aware of the landscape. That, to me, is a country house.”