Give the gift of good taste this season.

Splurge on Champagne and opulent reds from the world’s top wine estates. 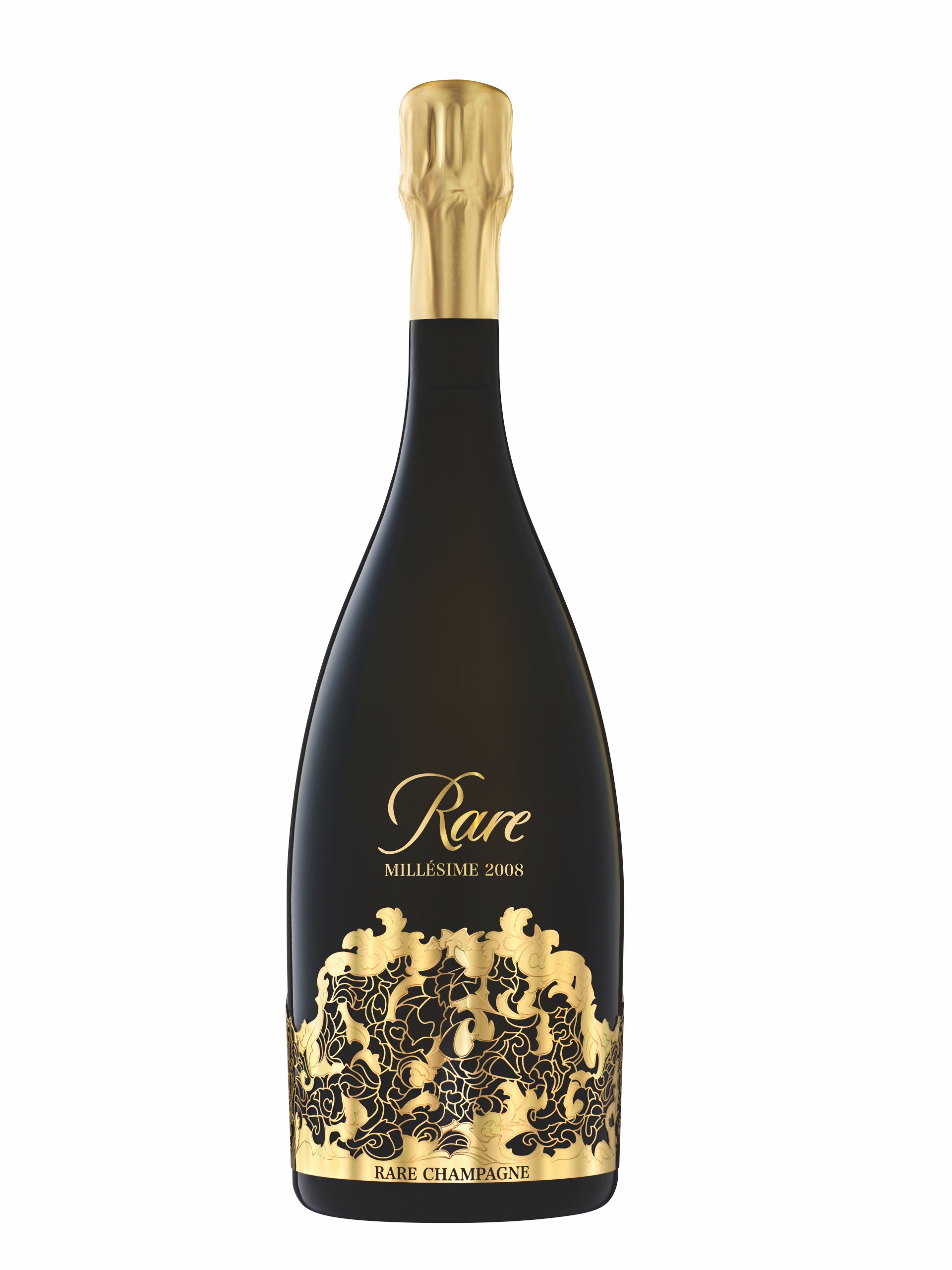 This spectacular Piper-Heidsieck Tête de Cuvée shows delicate aromas of orange blossom, hyacinth, and almond, and possesses passion fruit and coconut flavors. A Pinot Noir dominant blend, it has saline minerality and exotic spice. Esteemed Cellar Master Régis Camus declares vintages of Rare Champagne only in exceptional years and there have only been twelve vintages since its inception in 1976. Rare comes in a black bottle adorned with a (removable) gold tiara, designed by Paris jeweler Arthus Bertrand.

From Castello Banfi’s estate vineyards in southern hills of Montalcino, this superb Brunello di Montalcino from the iconic 2016 vintage has aromas of violet, cherry, vanilla, licorice, and spice. Made from select Sangiovese clones and aged for five years in total with two years in French barriques and Slavonian oak casks, it’s elegant with velvety tannins.

With 80% Pinot Noir in the blend, Carte D’Or has white flower, peach and ginger aromas, a complex, dynamic texture, and a chalky finish. It’s made with a high percentage of reserve wines and is bottled unfiltered with low sulfur. Located in the Côte des Bar, the House of Drappier is the wine of French Presidents, starting with Charles de Gaulle in the ‘50’s, and continues to be the champagne of the Élysée Palace under Jacques Chirac, Nicolas Sarkozy, François Holland, and now President Emmanuel Macron. 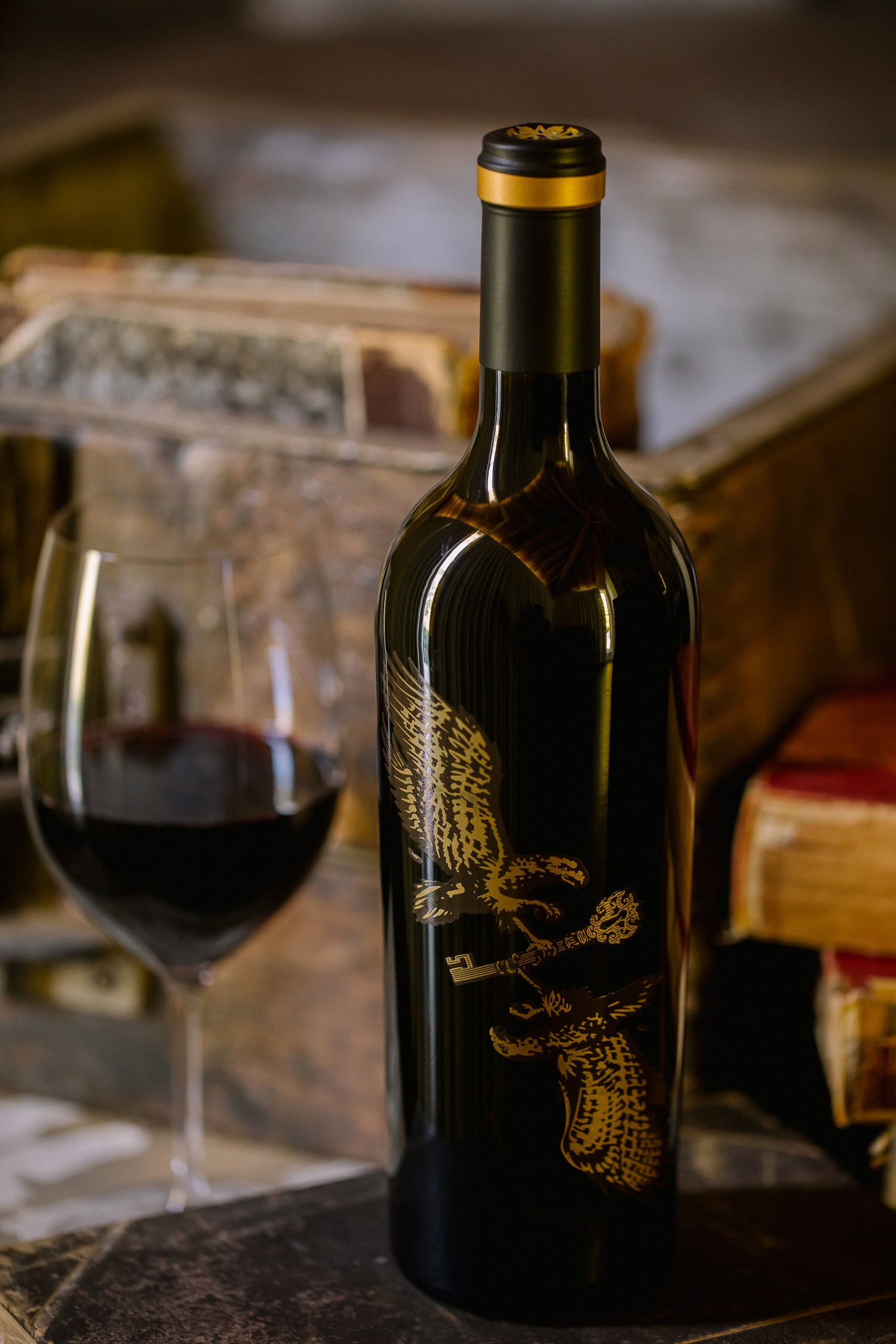 A Napa property on Diamond Mountain at up to 1300 feet above sea level in Calistoga, Theorem Vineyards puts out luxurious wines in impressive black bottles with gold etched illustrations. A voluptuous Cabernet Sauvignon, Hawk’s Prey has enveloping aromas of violets, black currant, blackberry, and cedar. The 24-acre vineyard planted to the Jenkins clone, supposedly originating from Château Lafite Rothschild, is stunning, precise, and concentrated with fine tannins. 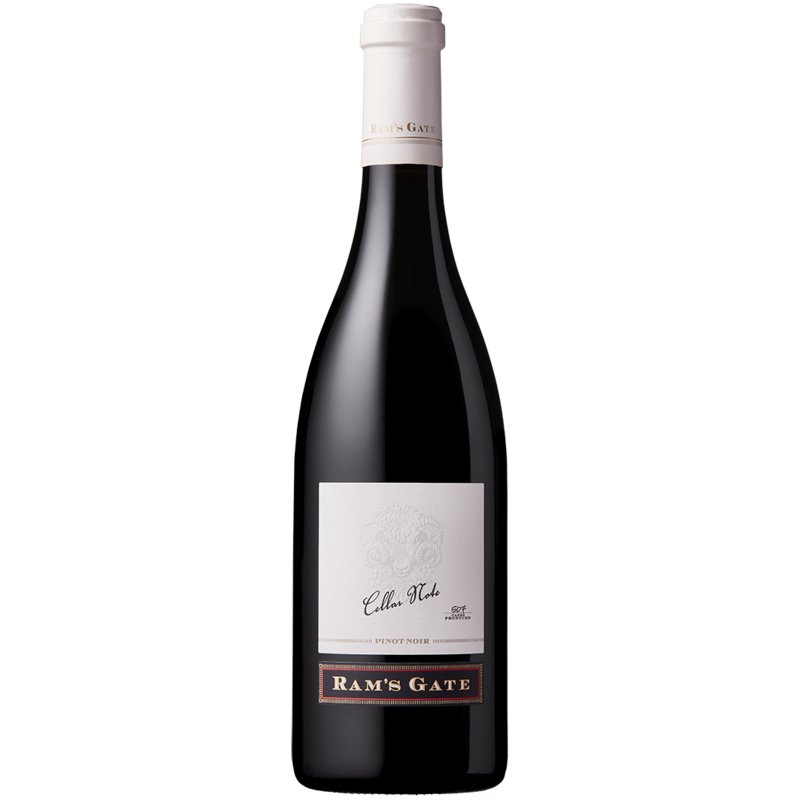 To create this dynamic and precise Pinot Noir, winemaker Joe Nielsen blends two parcels of Bush-Crispo Vineyard on the benchland of the Russian River Valley, Sonoma. The parcels were planted in 1998 and 2008, making it a blend of 10-year and 20-year-old vines for the 2018 vintage. The younger block brings the aromas of rose petal and cherry, and the older vine block gives a depth of flavor, black currant, acai berry and anise notes, and a firm structure. This delightful Pinot possesses an uplifting acidity.

At the foothills of Mont Ventoux at 2,000 feet above sea level, Chêne Bleu is a fascinating wine estate in the purest of places in the Southern Rhône. With a terroir of spectacular isolation surrounded by forests, hills, and valleys within the 200,000-acre Mont Ventoux UNESCO Biosphere, the winery practices sustainable, organic, and biodynamic viticulture. Made from old vine Syrah and Grenache and a touch of Rousanne, “Héloïse” is fragrant and elegant, with aromas of violets and black berries, and truffles on its long finish. 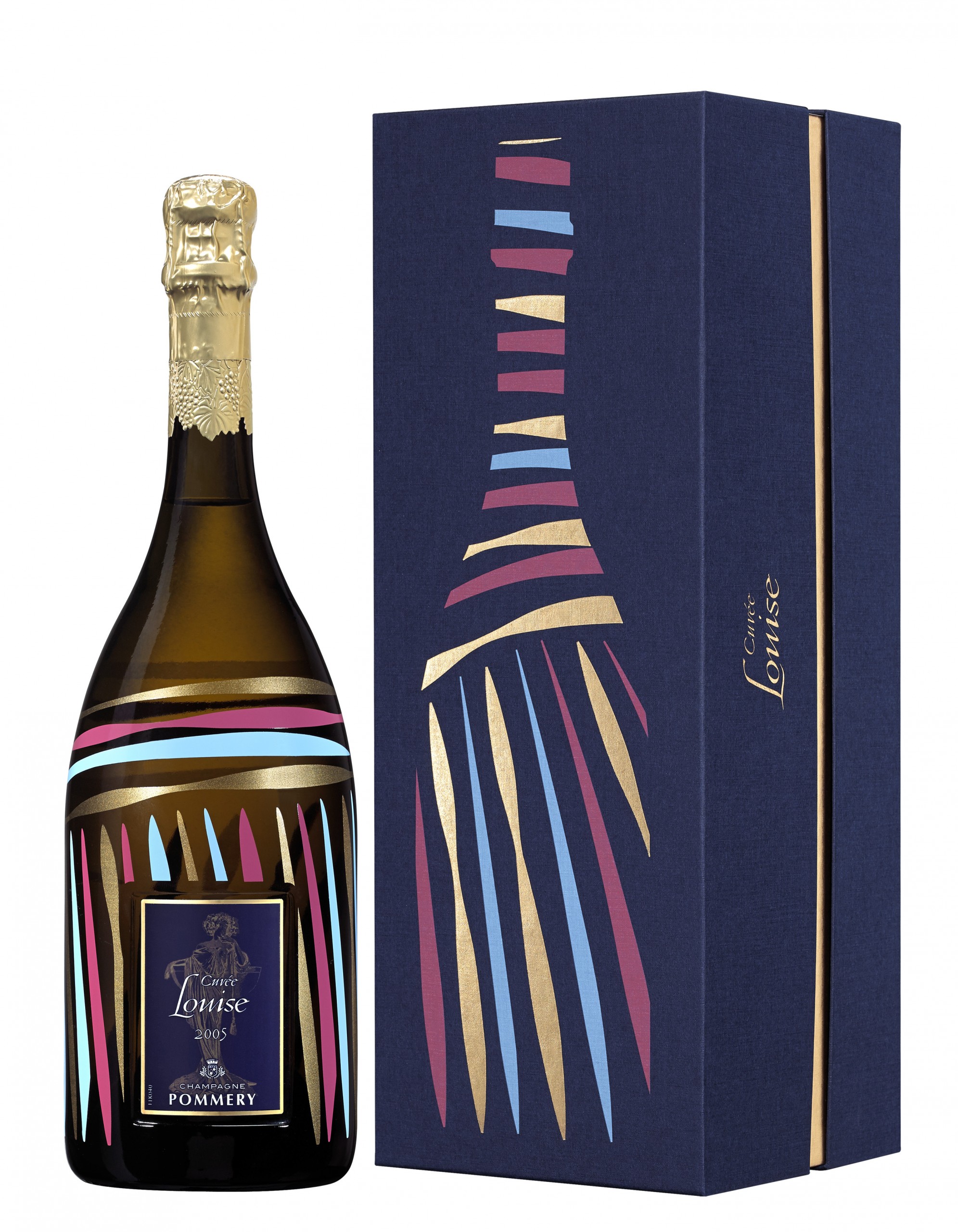 Made from 60% Chardonnay and 40% Pinot Noir from three Grand Crus— Aÿ, Cramant and Avize—this splendid Champagne has lime blossom and hawthorn aromas, peach, pear, and plum fruit flavors with hints of minerality and hazelnut. Cellar Master Clément Pierlot creates a pure and harmonious blend with low dosage and fine mousse. Cuvée Louise was named in honor of Madame Pommery’s daughter. 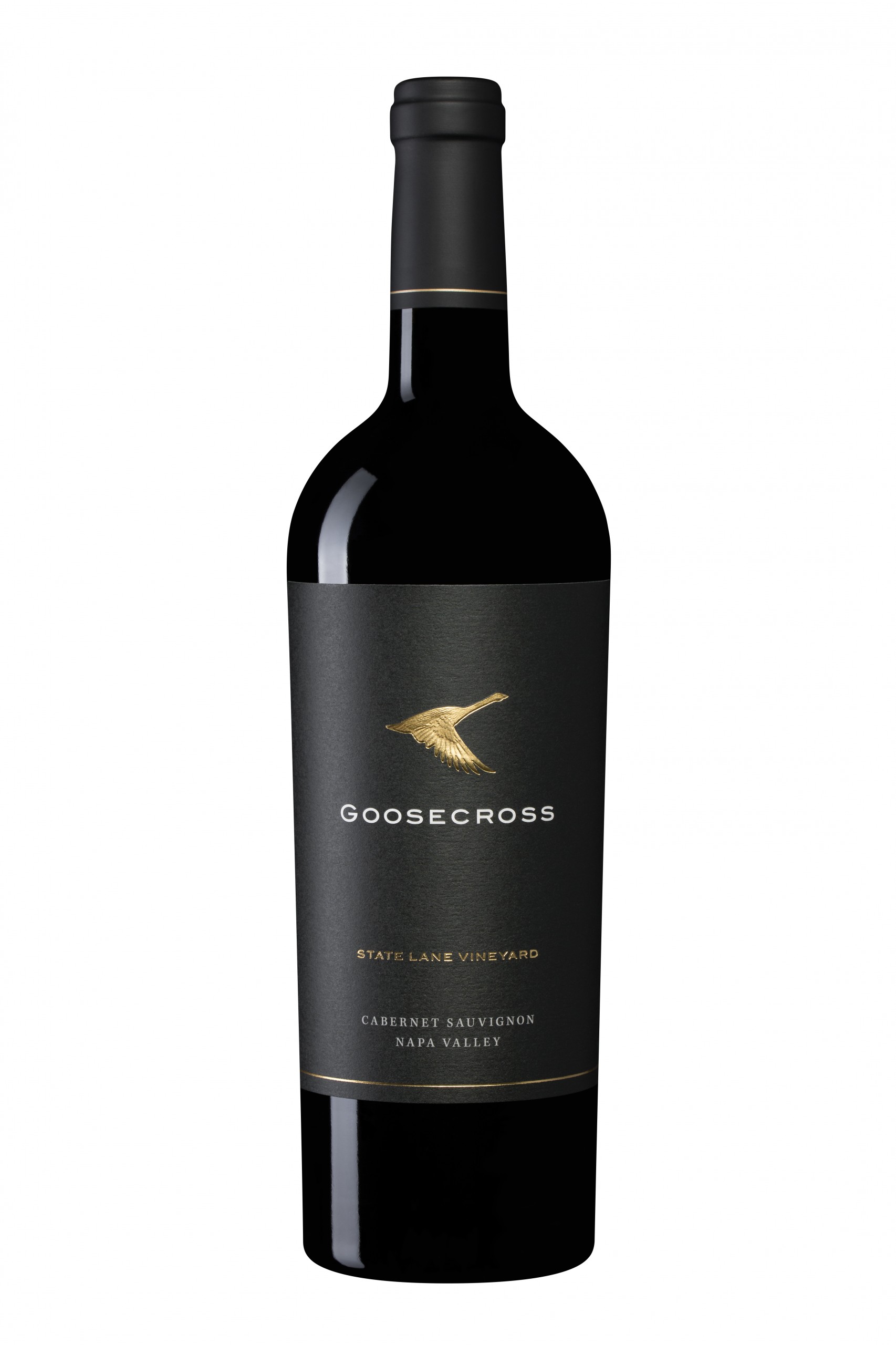 Winemaker Bill Nancarrow crafts this elegant Cabernet from the estate State Lane Vineyard located in the heart of Napa Valley. It has lovely aromatics of violets, black cherry, and blackberry with bright flavors of currants, blueberries, and a touch of tobacco. 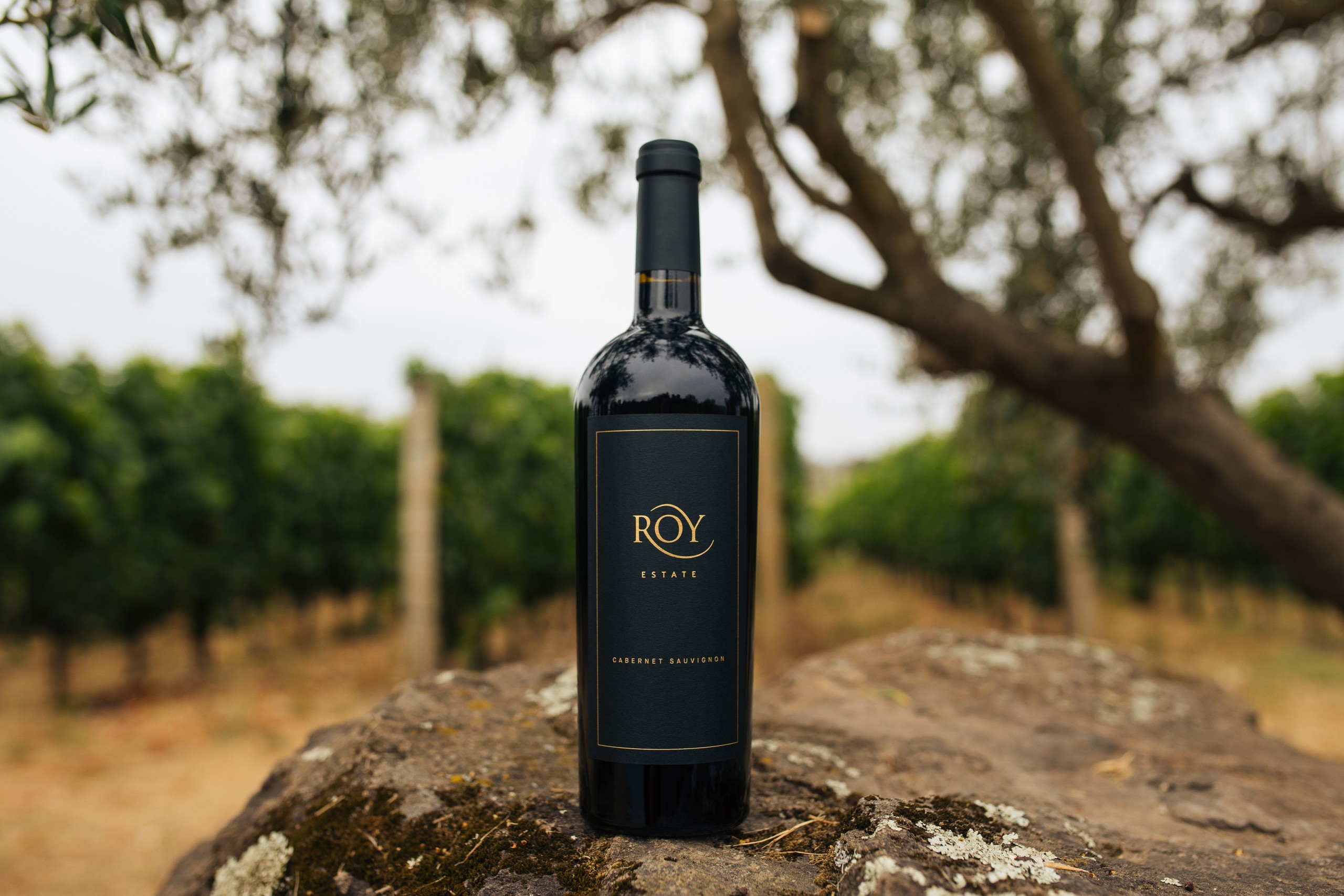 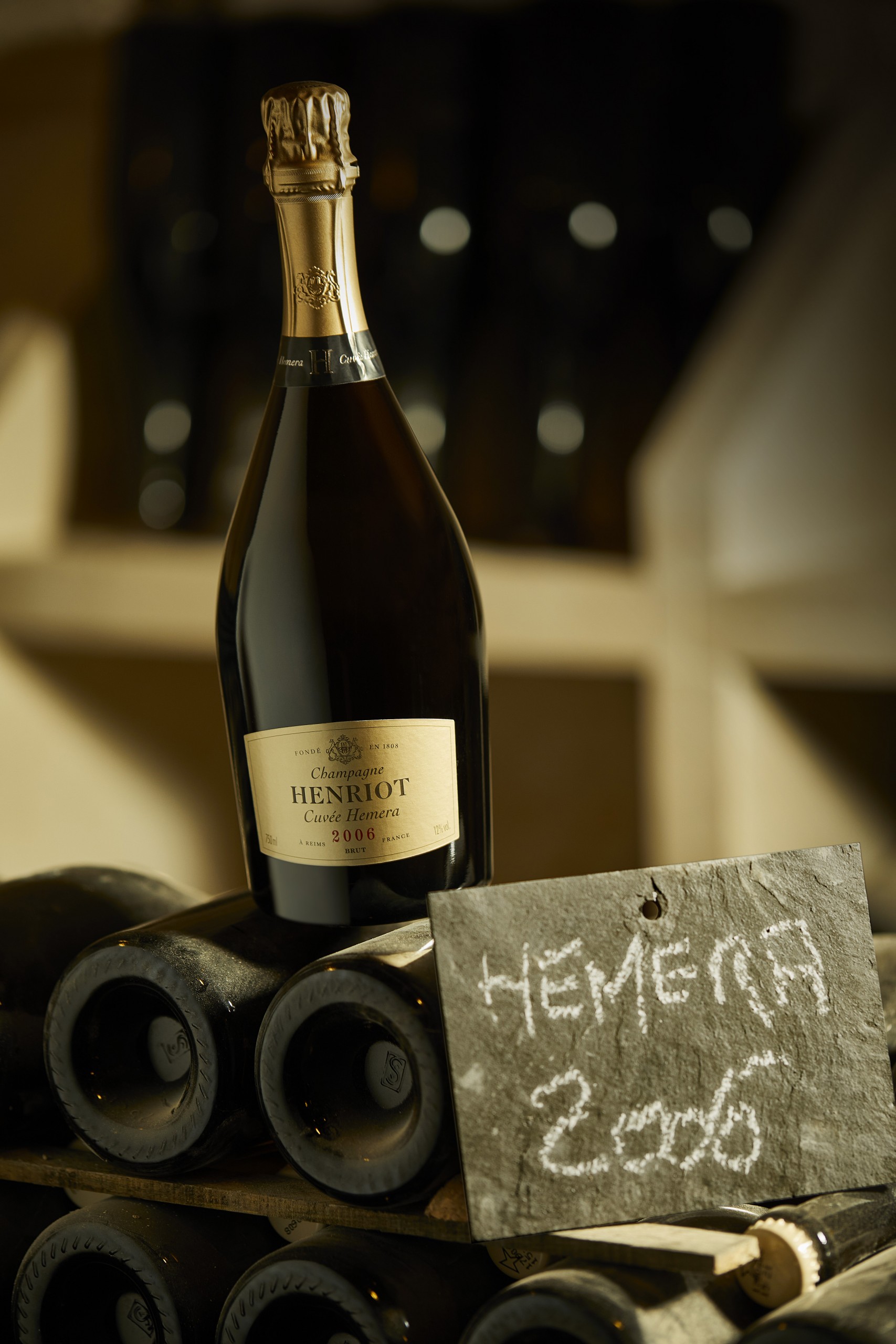 A house founded by Apolline Henriot in 1808, Henriot sources its Pinot Noir and Chardonnay from Grand Cru villages in Montagne de Reims and Cotes de Blanc. This lively prestige cuvée, aged 12 years on its lees, has a bouquet of white flowers, apricot, nectarine, and pastry along with chalk and saline accents. It’s 50% Chardonnay, 50% Pinot Noir and is a blend of Apolline’s six original Grand Cru parcels. Cellar master and vineyard director Alice Tétienne recently introduced the new prestige cuvée in New York.

An iconic vineyard of the Sonoma Coast, Gap’s Crown is situated on the western slope of Sonoma Mountain. The persistent wind and fog from Petaluma Gap result in smaller, thicker-skinned, intensely flavorful berries. Pinot Noir specialist winemaker Bob Cabral (longtime at Williams Selyem) joined Three Sticks several years ago and has created a brilliant wine with a nose of boysenberry and blackberry and hints of graphite and ginger. 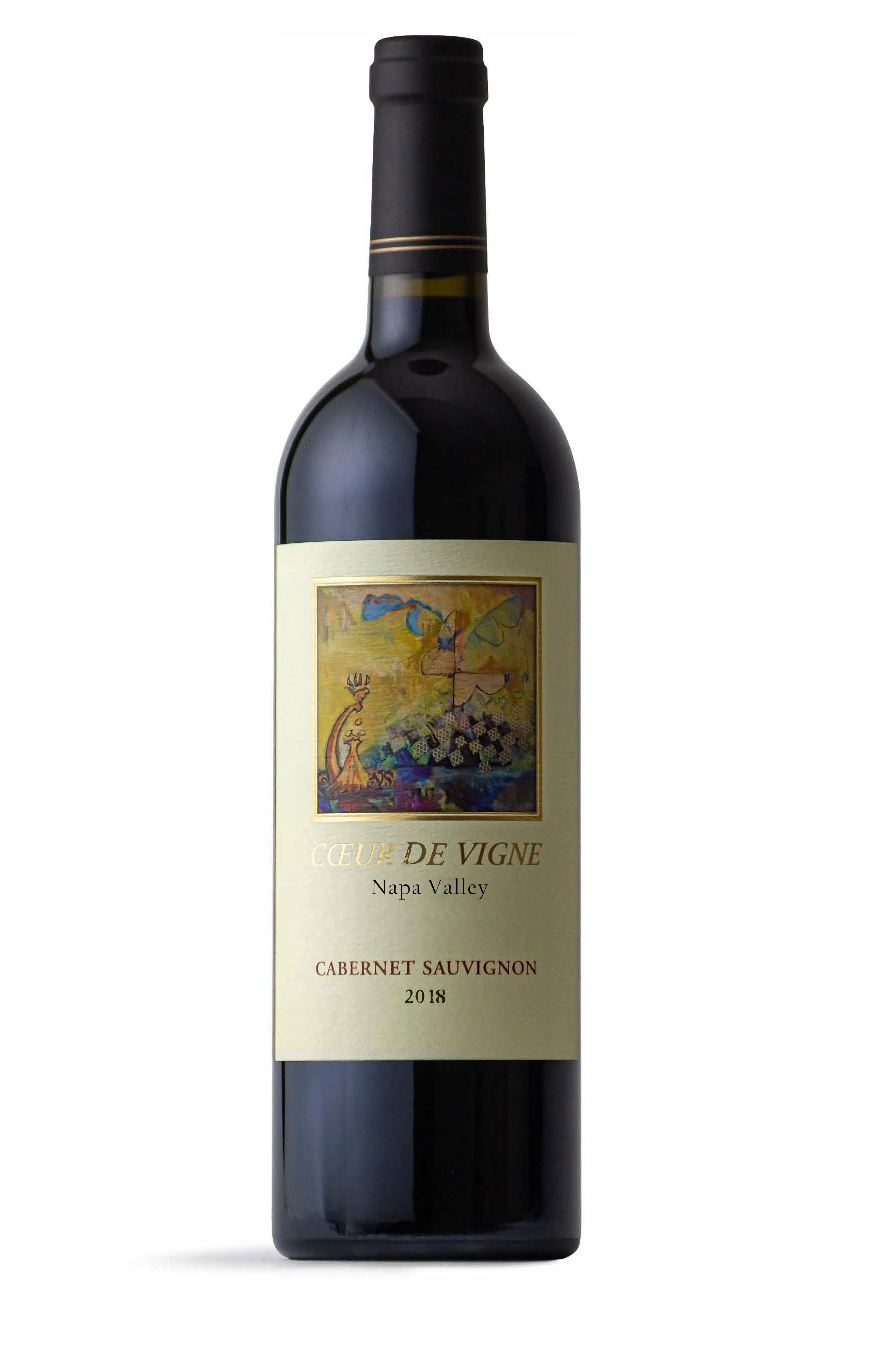 This full-bodied and velvety Bordeaux blend (61% Cabernet Sauvignon, 26% Merlot, 13% Petit Verdot) from Napa Valley’s fantastic 2018 vintage has ripe black cherry and boysenberry aromas with hints of clove, thyme, pepper and forest floor. The heritage of this pioneering Rutherford property dates back two centuries and today Sullivan Rutherford Estate under winemaker Jeff Cole, who was recruited from Schramsberg a decade ago, is taking the winery to the next level. 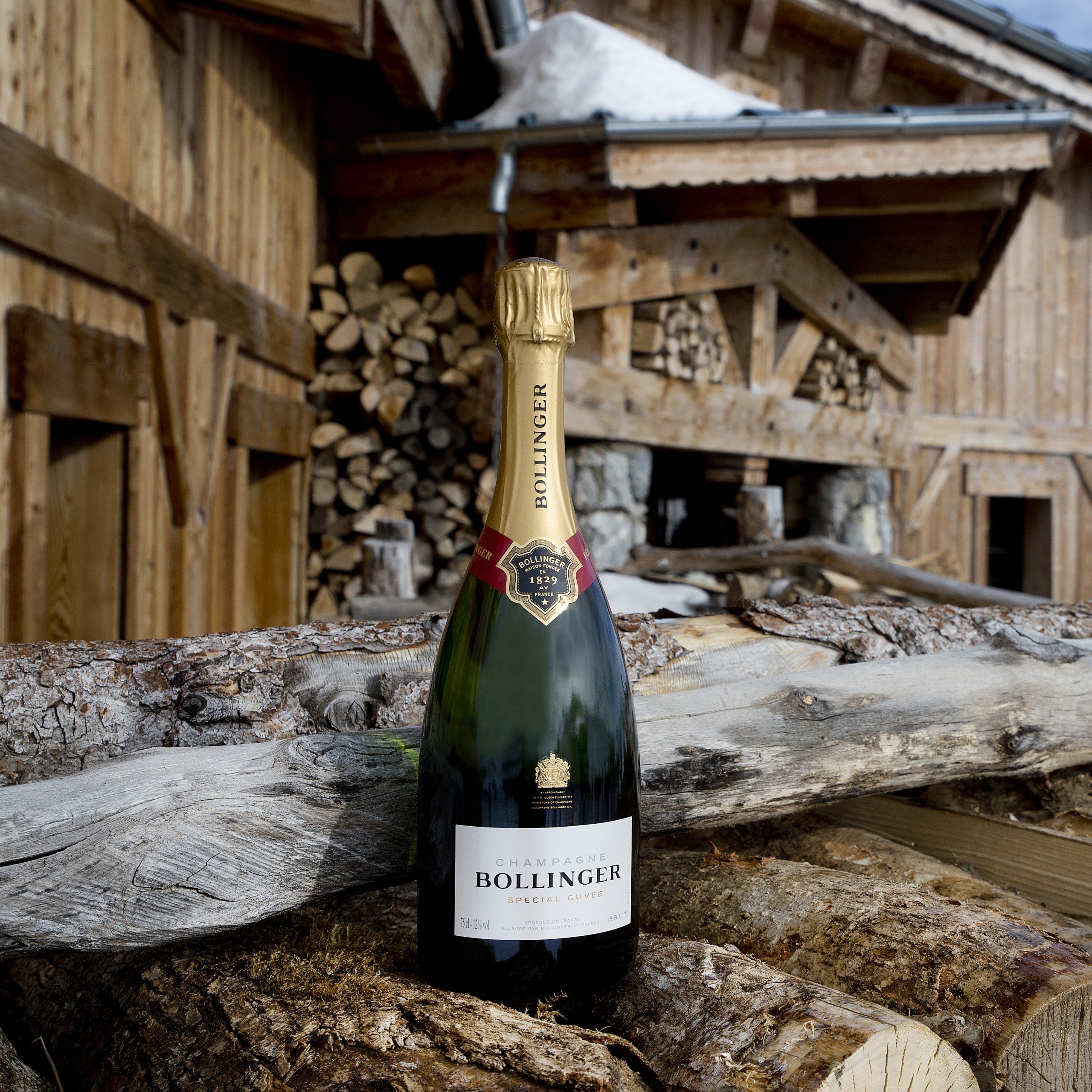 This Pinot Noir-dominant NV blend from Grand and Premier Crus has always been a favorite of mine. It fills the mouth with vivacious tiny bubbles and displays aromas of brioche, apple, pear, and walnut with precision and power. Located in Aÿ in Vallée de la Marne, the House of Bollinger has been run since 1994 by the great-great grandson of founder Joseph Bollinger and remains one of the few great family-owned Champagne houses.

Created in the 19th century, Marchesi di Barolo, located in Langhe in Piedmont, has a website chart documenting 150 years of Barolo vintages with commentary. Cannubi is an exceptional cru coming from a long sloping hill vineyard with calcareous and clay soils in a sub-zone of Barolo. Made from Nebbiolo, this garnet-red wine is perfumed with roses, licorice, spicy and toasty oak. It will age for twenty years and is a perfect gift for collectors. 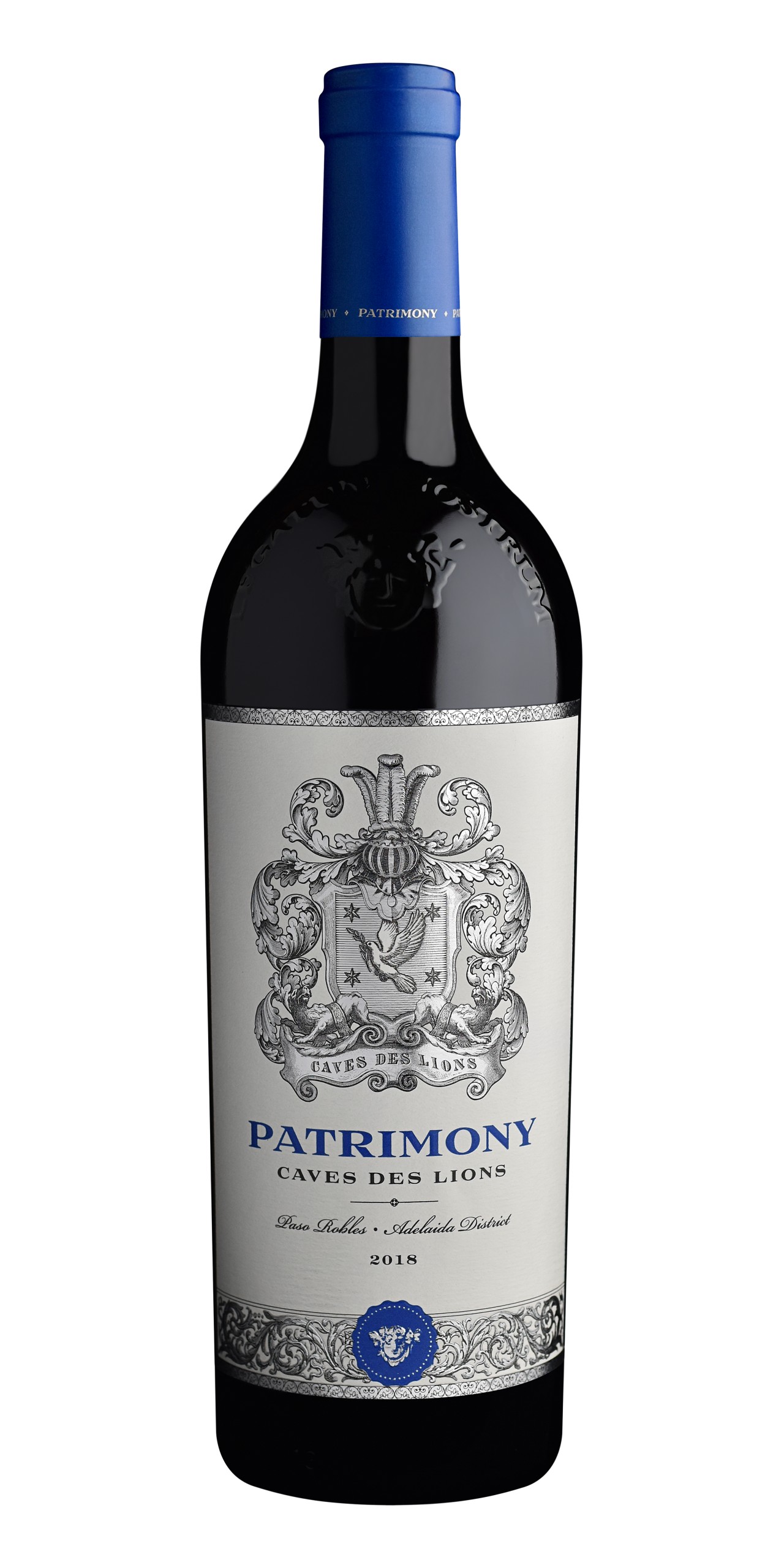 Winemaker Daniel Daou has put Paso Robles on the world wine map for his Bordeaux blends and single varietal Cabernets. Possessing an intense nose with scents of roses, cigar box, dark cherries, blackberries and chocolate, Caves des Lions is a dense, bold, and vibrant wine made from DAOU mountain fruit grown at up to 2,200 feet in elevation. Robert Parker’s The Advocate consistently awards PATRIMONY wines the highest scores. 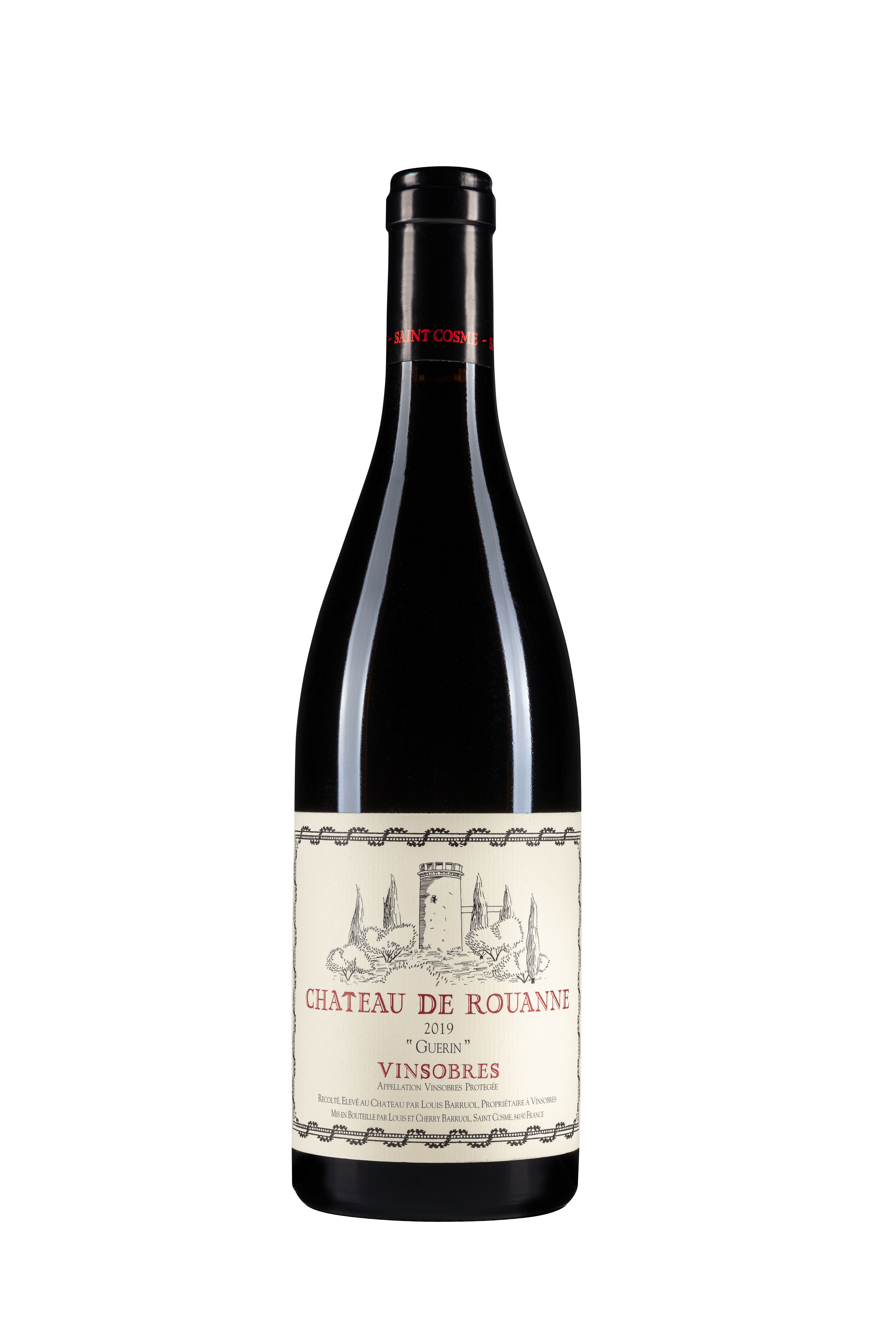 An historic estate in the Rhône Valley with a 12th century Medieval castle among its 153 acres of organically farmed vineyards, Château de Rouanne is now owned by winemaker Louis Barruol as his second winery along with his celebratedChâteau de Saint Cosme. A 50% Grenache, 30% Syrah, 20% Mouvedre blend, “Guerin” has a charming personality with scents of wild violets, marzipan, and blackberries along with salinity and minerality. 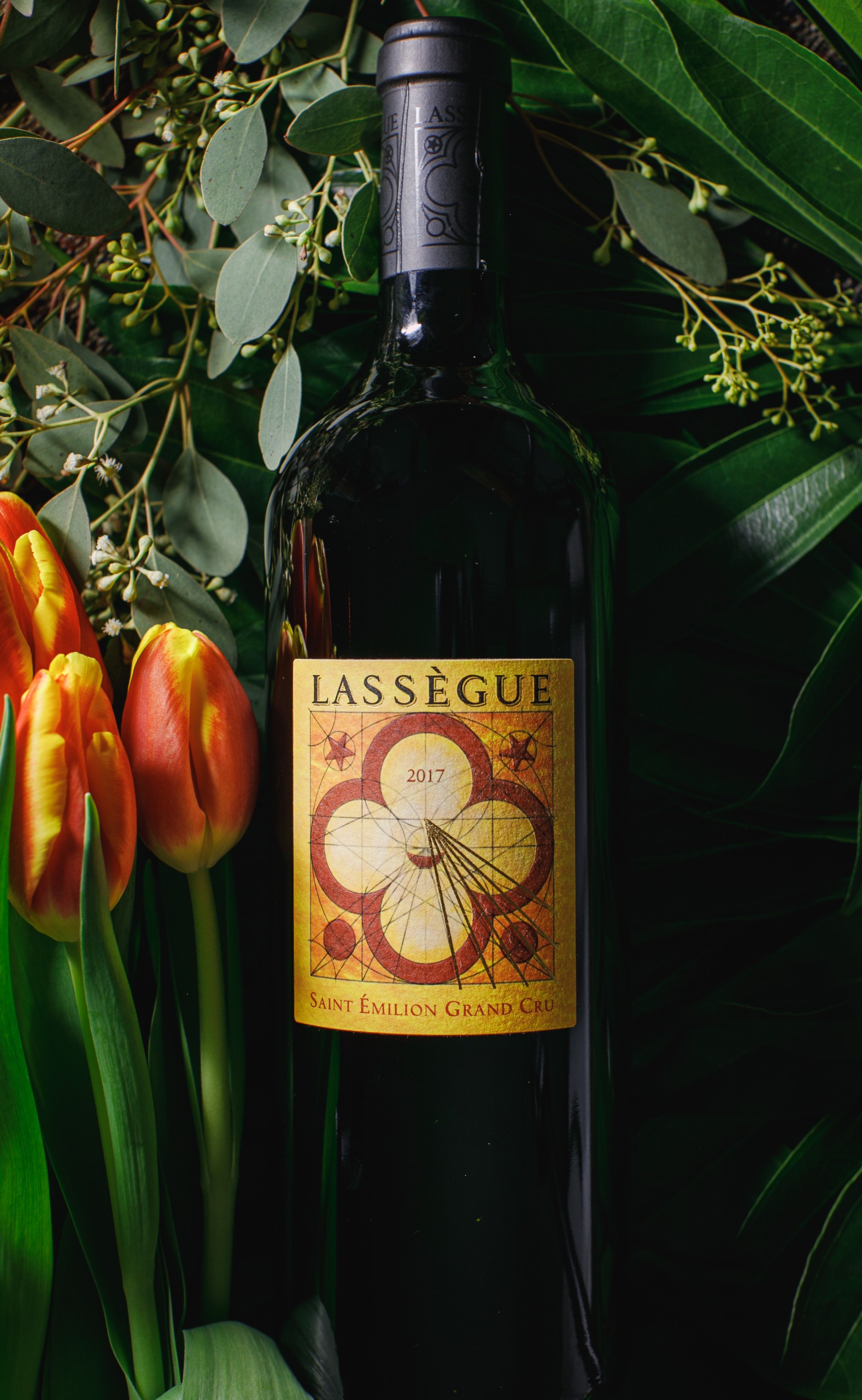 On the Right Bank of Bordeaux on the southern hills of the Côte de Saint-Émilion, Château Lassègue farms sustainably with a father and son winemaking team–Pierre and Nicolas Seillan–and California’s Jackson Family Wines as a partner for the last 20 years. Ornate sundials adorn the façade of the estate’s 18th century château and are symbolic of the biodynamic practices. Made from 50% old vine Merlot, 45% Cabernet Franc, and 5% Cabernet Sauvignon grown in clay and limestone soils, the flagship “Lassègue” is perfumed with violet, cassis and blackberry and has layers of minerality, leather and mushroom.

Familia Torres, a fifth generation pioneering winery based in Catalonia, Spain, has addressed climate change by planting high elevation vineyard sites in Priorat. Made from Cariñena, Garnacha and Syrah, “Salmos,” named for the Carthusian monks who first planted vines there 1000 years ago, is highly perfumed with roses, wild herbs and black cherry and has a fresh acidity from its cooler microclimate. With his Torres & Earth project, Miguel Torres Maczassek is exploring methods of viticulture to decrease the release of CO2 and is also involved in International Wineries for Climate Change started a few years ago.

The iconic wine of Saget La Perriere, a third-generation family winery in the Loire Valley, is a gorgeous 100% Sauvignon Blanc with quince, dried apricot, and tropical fruit flavors along with honey, vanilla and minerally on the finish. The wine is aged in barrels for nine months with regular lee stirring giving it body and complexity. Saget brothers Arnaud and Laurent lead their family’s wine domaines, which span the breadth of the Loire appellations.

For Your Thanksgiving Table's Pinot Noir, Look to the Pacific Northwest