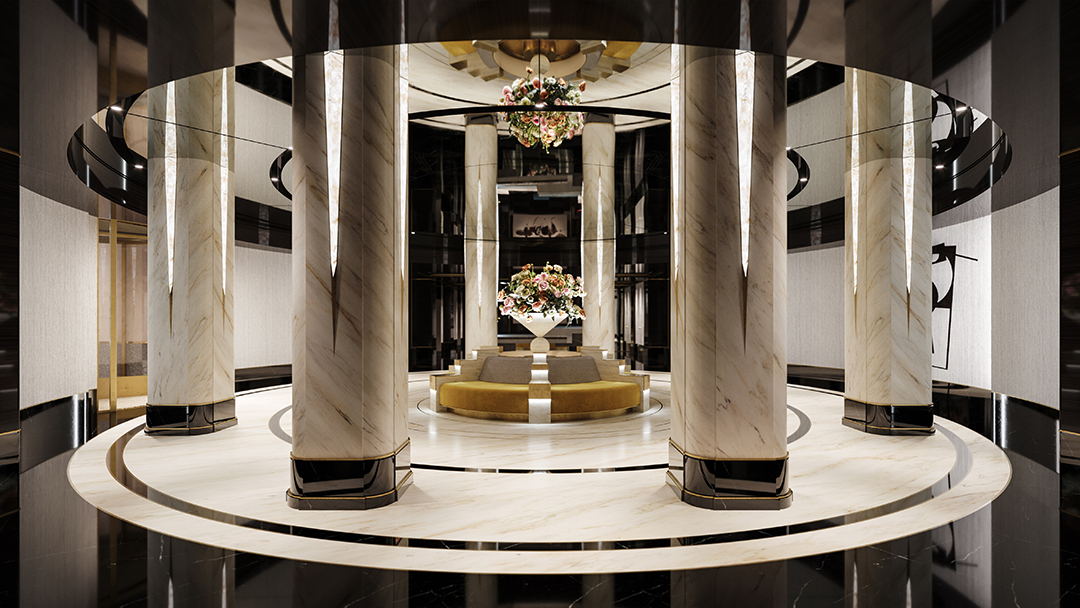 Exciting things are happening at the Waldorf Astoria. Since 2017, the iconic NYC landmark has been closed to the public as it was being extensively restored and transformed to offer residences for the first time ever. Sales of the Towers of the Waldorf Astoria launched earlier this year. But what was restoring and updating such a legendary structure like? How did this lengthy process unfold? To peek behind the curtain, we spoke with Frank Mahan, Associate Director at world-renowned Skidmore, Owings and Merrill, the architecture firm on the project. 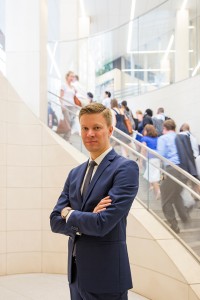 The Waldorf Astoria is a timeless New York icon. How did Skidmore, Owings, & Merrill create a design concept that would embrace the past, but take the structure into the future?

It goes without saying that the Waldorf Astoria is an icon of Art Deco design. But many people may not realize the extent to which the current structure, which was built in 1931, had been changed over the years. Before our work began, many aspects of the building did not resemble the original architects’ intent, as piecemeal renovations over the years had altered its character. Additionally, mechanical systems had been added to the exterior that took the focus away from its original grandeur, and some of the public spaces had been redesigned – with many original materials replaced altogether.

Our goal for this project is to restore the Waldorf Astoria’s sense of splendor and to make it a jewel in New York City again. We are working to restore the project to be much closer to the original design created by Schultze & Weaver more than 90 years ago, while also making it relevant and responsive to contemporary needs of guests, residents, and visitors alike. 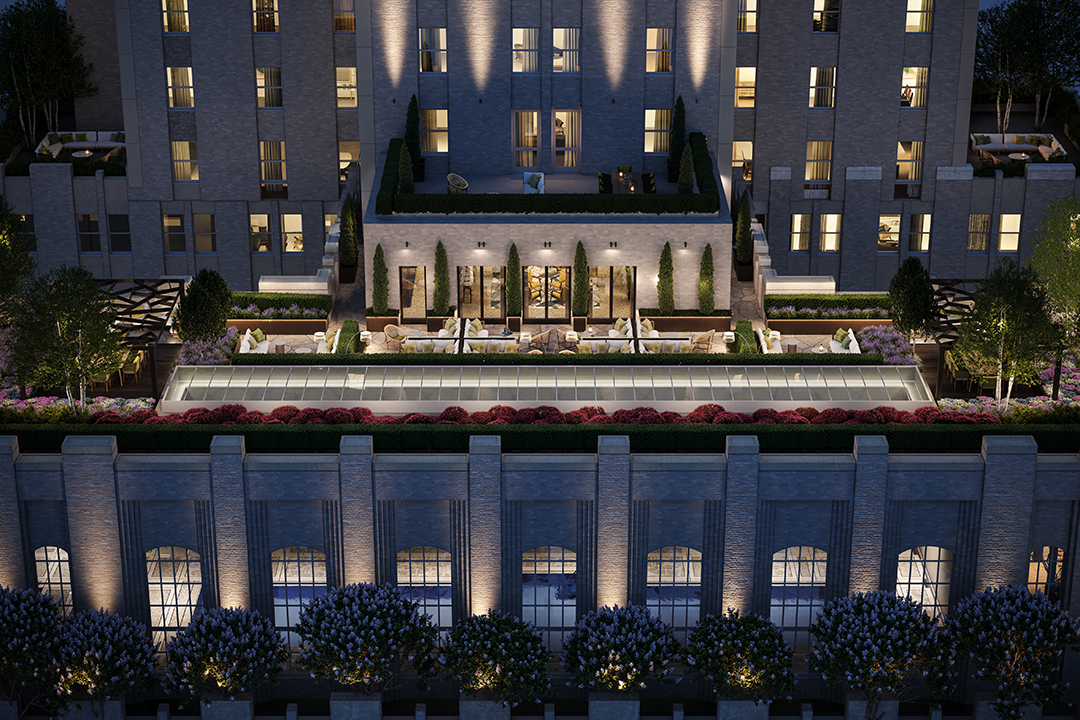 This meticulous transformation has been underway for three years. Were there distinct phases of the restoration and what was the most time-consuming aspect?

At SOM, we conducted extensive research into the Waldorf Astoria’s original design. We found Schultze & Weaver’s archives at the Wolfsonian at Florida International University and scanned the specifications, lists of materials, and anything else we could find. The Waldorf Astoria has its own archives as well, and we were able to determine what the building looked like in the 1930s. We then cross-referenced that with photos taken during significant events held over the last nine decades and learned not only what was changed, but when each renovation was made. All of this information is very important to know when you’re redesigning the spaces – it gives you a sense of how people understand the building today.

The Waldorf Astoria is one of New York City’s most prominent and beloved landmarks – the exterior was landmarked in 1993, and several interior public spaces were designated in 2017. With the developer, Dajia Insurance Group, we fostered a very close working relationship with the staff at the New York City Landmarks Preservation Commission to restore the exterior and the landmarked interior spaces.

Since it is an official New York City landmark, both on the outside and in some of its most significant interior public spaces, this made the project particularly complex because the city’s Landmarks Preservation Commission must review and approve every change to the exterior and the interior landmarked spaces. The commission has very high standards, and we worked very closely with its staff to modify the building for a new purpose, renew it for the 21st century, and, at the same time, restore its historic character.

One of the remarkable discoveries we made was that only one original window had remained from 1931. In total, there are nearly 5,400 windows. The circa-1931 window served as the basis for the restoration and renovation. For about 900 of these windows, we raised the height by a full foot to allow more light than ever before. The quality of the glass is of course being modernized as well, with sound attenuation that ensures maximum acoustic privacy for residents and guests of the hotel.

The interior public spaces also incorporate new elements. In the 1930s, these spaces were illuminated by hidden light sources that created a soft ambiance. This scheme had been lost over the last few decades, but we are bringing it back to unite the spaces with a singular lighting concept, with modern technology that is more sustainable and long-lasting. The spaces will feel new and have some modernizations, but their design is rooted in deep research into the building’s history. In the new design, you will find beautifully subtle light covers throughout the building – from the ballroom to the private residences.

A new element for The Towers of the Waldorf Astoria residences is inspired by the legendary service of the historic hotel. Every residence has its own concierge closet seamlessly integrated into the entranceway for the secure and private delivery of packages, laundry, and room service. In this age of social distancing, it’s the ultimate amenity – items will appear in the concierge closet with a notification from a dedicated team of 24/7 porters. 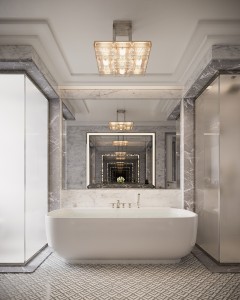 Do the residential units reflect the Art Deco history of the structure or lean more toward 21st-century style?

For the exterior and the landmarked public spaces, every design measure we took was executed with an eye toward restoration. For the residences, Paris-based interior designer Jean-Louis Deniot developed a contemporary interpretation of the Art Deco architecture. The interior finishes are elegant and modern, and in many cases handcrafted, with a clear nod to the history of the building. For example, the paneling on the doors is designed with bespoke antique bronze hardware and the mast bathrooms feature tile mosaics featuring Art Deco patterns.

We also leveraged the design of the Waldorf Astoria to create an entirely new amenity. In the 1930s, many towers were designed with several setbacks. Over the years, a lot of mechanical equipment had been placed on these setbacks, but we are removing all of that to create outdoor terraces that provide sweeping views of the city. We are also incorporating other contemporary features, including an exclusive residential lobby and porte-cochere – two spaces that some of the Waldorf Astoria’s previous long-term residents, like Frank Sinatra, Marilyn Monroe, and King Edward VIII of Britain, never had. 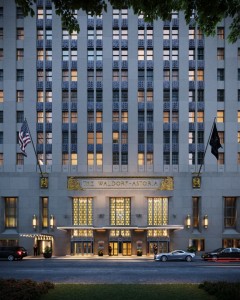 Were there any parts of the building that were tricky to restore or update?

The Waldorf Astoria is one of the largest and most complex landmarks in New York City’s history. It is 1.6 million square feet and occupies an entire block. Every historic space is also different from the next one, so there are no consistent, repeating details. It’s a lengthy process. But that’s what makes a project like this so fulfilling, for us as architects.

When we started our work, many of the public spaces were far from their original condition. In the 1960s and 1970s, the hotel undertook several renovations that radically changed the aesthetics of the interior, including the Grand Ballroom. Schultze & Weaver’s intent for this room was to create a ceiling illuminated by cove lights, which would be hidden to make it look like the room’s ceiling was light and bright – almost floating. That intent was not fully realized, and the room turned out to be too dark. A large chandelier was added at the center of the ceiling to help remedy this.

Many decades later, when we began presenting our renovation and restoration, someone spoke passionately about that chandelier in a public meeting. They had never experienced the space without it. But our goal was to restore some sense of the original experience, so we had to educate the public about what really was authentic to the building. The result will be a ballroom properly illuminated by the hidden cove lights using 21st-century technology – completing Schultze & Weaver’s vision in a contemporary way. 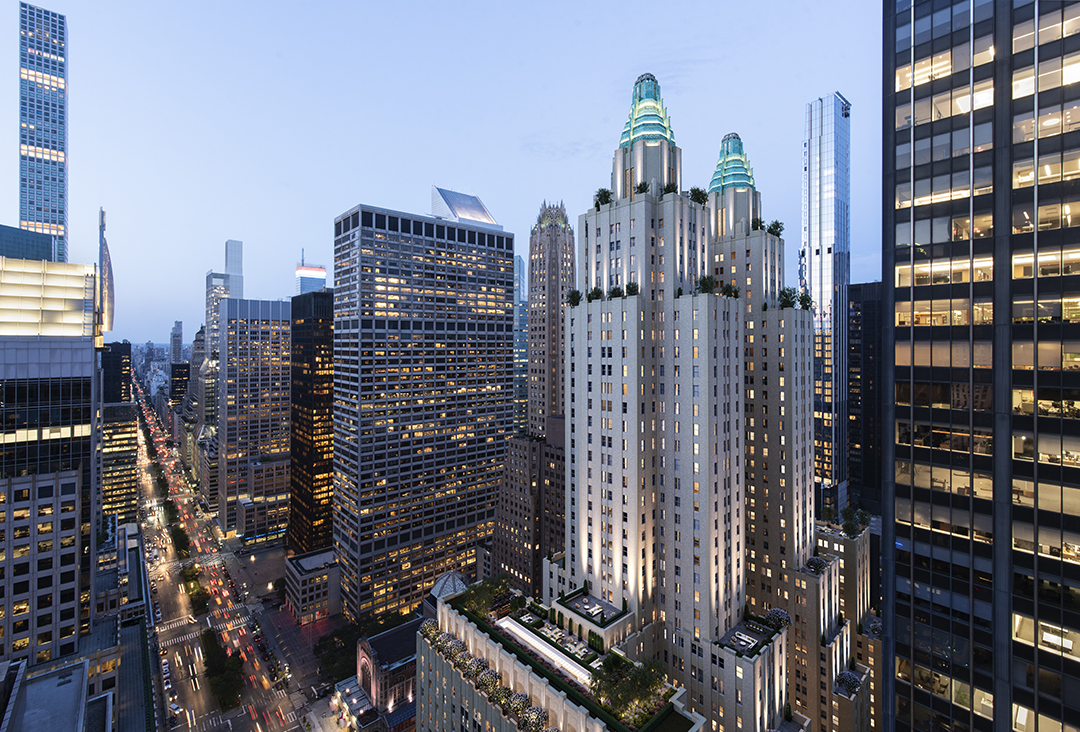 What new design element do you think people will be most impressed by?

The abundance of public spaces at the hotel’s main level is well known to anyone who has asked a friend to “meet me at the clock” for a drink – in reference to the lobby’s signature central clock. But the care with which the sequence of spaces – leading from Park Avenue to Lexington Avenue – was choreographed by the original architects may not be so well known. In fact, it wasn’t obvious at all when we began the renovation. This was because the spaces had been so significantly altered. But in fact, the series of spaces – arranged enfilade, or “in a row” – originally expanded and contracted in width in a perfectly alternating rhythm. This, combined with their stylistic variety, created great architectural drama as one moved from one space to the next. It wasn’t until we studied the original plans, carefully traced the outline of the public spaces, and stood back to look at the resultant figure that we discovered this original intent.

We’ve since worked with the owner to restore not only the original finishes for these spaces, but also – and more significantly – their original volumes. When New Yorkers, and visitors from around the world, walk through these spaces when they reopen, it will be a revelation – something completely new – created by returning to the original design intent and updating it for contemporary needs and uses. 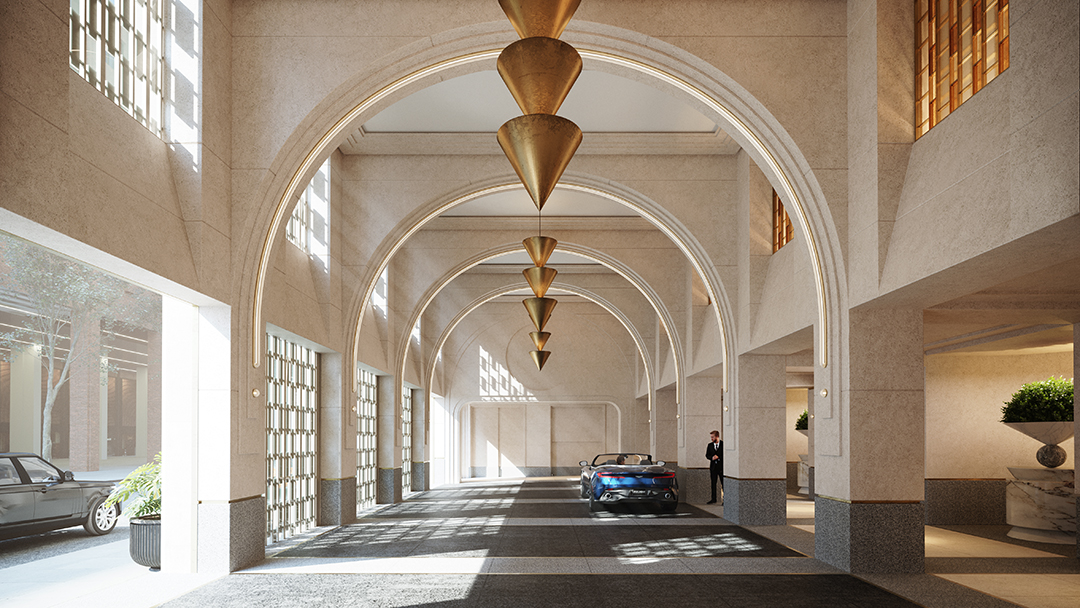 Lastly, what is the most interesting piece of history you learned through the project that everyone should know about the Waldorf?

The Waldorf Astoria was the world’s first Art Deco skyscraper hotel, and it very quickly became known as “the unofficial palace of New York.” The building hosted countless historical figures and cultural events. It was a place that anyone could enter and experience. Choosing one part of that history is quite difficult.

Some of the twentieth century’s most famous celebrities lived at the Waldorf Astoria. Cole Porter lived in suite 33A for nearly 30 years, writing some of his most famous songs on a 1907 Steinway grand piano that he nicknamed “High Society.” Frank Sinatra later lived in that same suite, reportedly paying nearly $1 million a year. Today, Porter’s piano – which was recently completely restored by Steinway & Sons – now sits in the gallery for the residences, awaiting its return to the hotel when it reopens.

For updates and more information on the Towers of the Waldorf Astoria go to www.waldorftowers.nyc or follow the progress on Instagram.