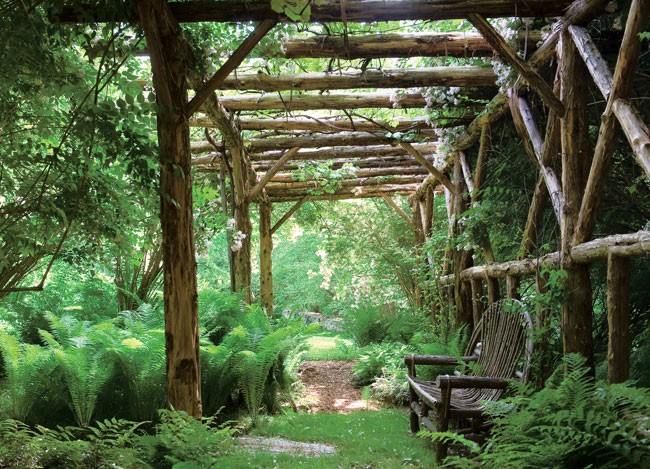 When Jayne Bentzen arrived in Washington 20 years ago, she was pretty much in over her head. Her 1840 farmhouse needed some serious shoring up and the property was covered in a seemingly impenetrable tangle of weeds. Plus, while the chain saws were still blaring, a neighbor knocked on the door to inform Jayne and her husband that they were now the proud owners of New England’s oldest standing flutter mill—which was in serious need of repair. 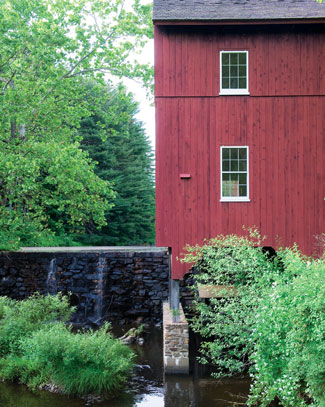 Turned out the pre-Revolutionary flutter mill that made use of Sprain Brook’s considerable muscle at Red Mill Farm was in good hands. Jayne’s husband—Benedict Silverman—adopted the landmark mill’s restoration as his mission, which diverted his attention while Jayne went about exploring the botanical version of buried treasure. Beneath all of those invasives lay the vestiges of a garden formerly tended by Bea Hessel, a local character of legendary pipe-puffing proportions who lorded over the area’s botanical scene. And her husband, Sid Hessel, was an amateur lepidopterist of such far-reaching renown that Nabokov paid a visit. When Jayne and Benedict happened on the scene, not only did they inherit a mill with baggage, but Jayne also found herself happily stewarding the wildflower fodder to nourish a cloud of wild butterflies that called the place home.

As she unearthed the ghost of a garden untended for too long, Jayne hatched ideas of her own. Big plans. As an actress (The Edge of Night, One Life to Live, Nightmare on Elm Street, A Breed Apart, to name a few) and model, Jayne’s signature look was wide-eyed nature-child. Strutting to the same (different) drummer, her gardens were configured with eyes wide open. Here, colors collide and textures are batted back and forth. Aromas pour, fruits ripen. But she went many steps further for a sensual experience beyond simply colors, scents, and the taste of homegrown lettuce straight from the earth. “I took it as an opportunity to get out and expose myself,” Jayne says.

Red Mill Farm puts all your synapses in gear. Her canvas is “a hidden place you don’t guess is here.” Given a historic house shouldering the road, Jayne laid ambush of an entry garden loaded with lilacs, hostas and woodlanders. More than merely proclaiming welcome, it draws you in. From there, the path takes a turn around the side of the house and down the steps onto a flagstone terrace with a fountain wrapped in white vines and luminous blossoms. At dusk, the garden tosses out aromatic innuendos.

Next vista in the circuit is reached by ducking under a vine-covered archway into blazing sunlight. A circle of alliums and other copacetic perennials floats at different heights. That avenue narrows into a labyrinth of paths meandering to seating places scaling the hill. Jayne planted roses among many perennials clambering along the terrace garden. Upper walkways spill with exotic plants in containers. Below, a scarcely mowed field lays a shag carpet on the way to the mill. Take a turn and you find yourself wading through a cool wetland sporting a million primroses trying to bully the Iris pseudocorus that Jayne battles into submission. 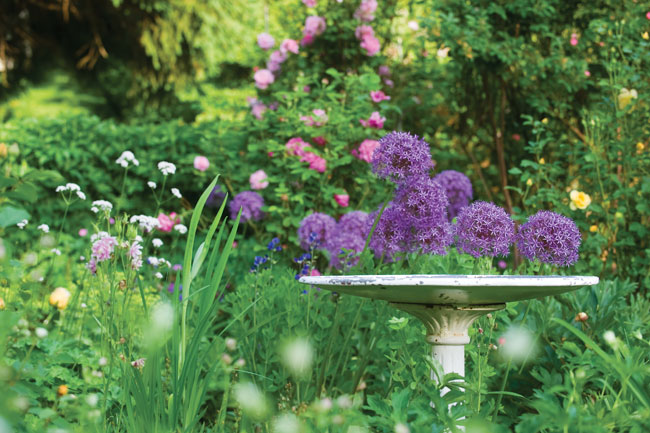 Clearly, Jayne knows her special effects. She surrounded a shaded fern dell with white blossoming beauty bushes. As her daughter, Claire, reached her teenage years, Jayne gardened with her in mind, carving space by the brook for a rope swing. Even the pasture for Claire’s horse runs up the hill with just the right zigzag. To maximize on the brightness across the road, Jayne installed a potagér with raised beds of
local stone.

The garden has resting spots and destinations, but it always demands that you are “present,” to use Jayne’s word, and cognizant of the experiential odyssey she has created. She likes to sit back and sample the sensual smorgasbord herself—a meditative experience. In her garden of earthly delights, Jayne finds herself becoming one of the players in what she calls “moments of happiness.”