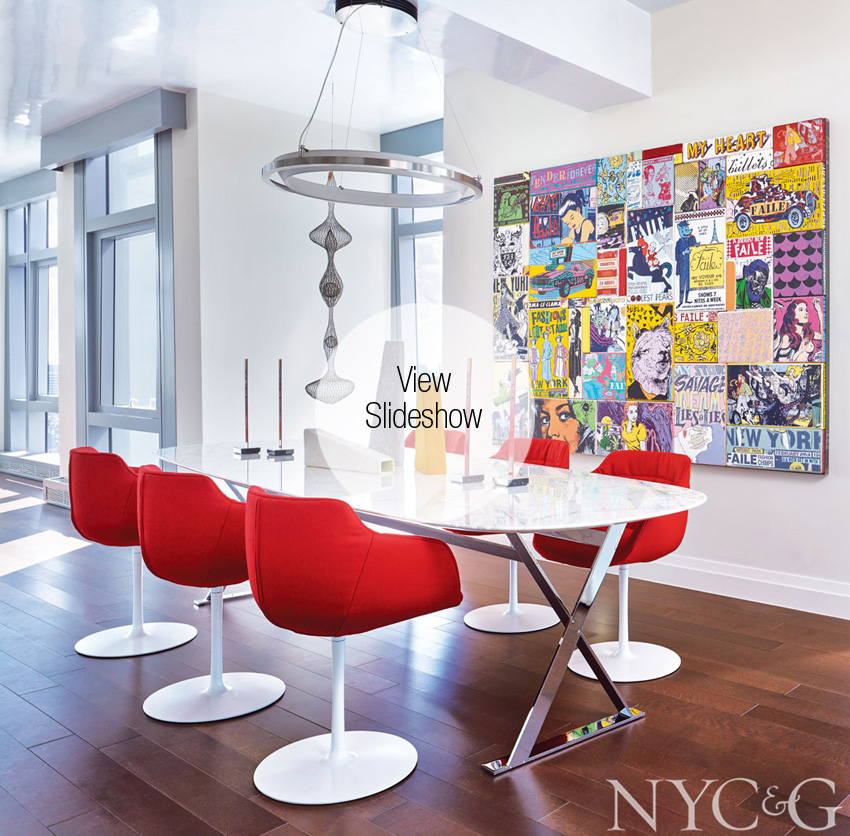 Few paid design jobs offer decorators the freedom they enjoy at home. The apartment showcased on these pages, however, came exceptionally close. “My clients’ taste is very much like mine,” notes New York–based decorator Benjamin Noriega-Ortiz, “and I would have done something similar.” But on a slightly lower budget, perhaps, and maybe without the blue-chip Pablo Picasso platters and the Fernando Botero sculpture near the front door.

Noriega-Ortiz’s clients, who live in northern Florida, use the full-floor apartment in Chelsea’s 35XV building one or two weeks each month. The decorator was an obvious choice for the interiors, since he installed lobbies, kitchens, and bathrooms throughout the tower, designed by FXFowle Architects, to warm up the structure’s bracingly futuristic high-rise aesthetics. The prismatic glass edifice is particularly unexpected on its unassuming block on the edge of Chelsea, alongside neighbors that include a Jesuit high school.

Curtain walls in the building are raked at angles, to accentuate aerial views of the neighborhood and the skyline. Noriega-Ortiz, who trained in architecture himself, convinced the developers to incorporate blackout shades inside them, thereby keeping lines clean. For his clients, he extended the already abundant vistas by mirroring walls situated at right angles to the glass, in order “to create a bay-window illusion,” he explains. The living room ceiling, finished in a laboriously hand-polished plaster, adds an equally alluring but more atmospheric form of reflectivity.

The clients reviewed furnishings with Noriega-Ortiz long distance, using a private Pinterest page. (“I can’t have all my clients looking at one another’s things!” Noriega-Ortiz says with a laugh.) Not surprisingly, given the building’s architecture, everything has a modern bent: The circular living room rug is shag, while a shiny new chrome-and-marble dining table is Italian, a nod to the owners’ family history. “They’ve summered in Italy the way other people decamp each year for the Hamptons,” the decorator says. “Anything that comes out of Italy is really well made, and they grew up with that.” While clients at this level usually work with independent art curators, Noriega-Ortiz helped them select and situate their collection, including a small work by Marc Chagall, who did murals in the Metropolitan Opera House. “This establishes that they are in New York,” says the designer, who hired an artist to draw faux paneling in the master bedroom, using a non-smudge pencil. It inspired the purchase of the suite’s framed drawing by master wall-scribbler Sol LeWitt.

The wife requested guest bedroom walls in electric saffron, a favorite color. Another of the four bedrooms is converted into her exercise and dance room, for yoga. And Noriega-Ortiz built a partition to enclose the husband’s “man cave,” a haven for cigar smoking. The decorator’s Pinterest page included some hand-painted men’s suits by artist Scooter LaForge, a mutual friend of his and fashion doyenne Patricia Field. For the cave, Noriega-Ortiz commissioned a LaForge canvas to zip onto a freestanding column “like a bustier.”

The bears and moon depicted on the work “are smoking, and it has gold leaf—classic Scooter,” Noriega-Ortiz notes. But the particulars of the composition—conceived as a street-art take on illustrator Ludwig Bemelman’s famous mural for Bemelman’s Bar, at the Carlyle hotel—were kept secret until the reveal. The husband didn’t quite get it, but the designer wasn’t concerned. “I never commission anything I would not buy for myself, so I was ready to keep it.” Not to worry. Not only was peace made with the piece, but the husband is now creating a line of artist-painted suits. Noriega-Ortiz is even thinking of wearing one at Art Basel this year.

A version of this article appeared in the October 2016 issue of NYC&G (New York Cottages & Gardens) with the headline: Mondo Condo.