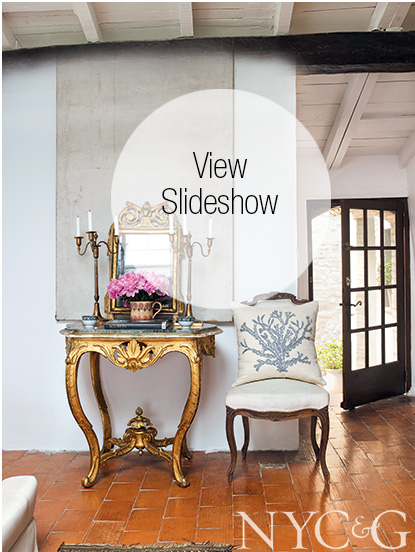 ​Bernt Heiberg and Bill Cummings are partners both in work and in real life, and their getaway in the South of France—a pristine, dollhouse-like residence in the medieval hill town of Haut de Cagnes—is an elegant testament to their relationship. Which might make things sound like the home is a showcase of treasures they’ve acquired together over the years. But it’s more complicated than that.

The pair met in Warsaw in 1990 and launched their design studio, Heiberg Cummings, which has offices in New York and Oslo, less than two years later. (They also run a by-the-room design service called Lett.) Heiberg is a stereotypically blond Norwegian with an uncharacteristically extroverted nature and flamboyant charm, as well as an exceptionally restrained decorative eye; Cummings, who was born in Colorado and grew up in San Francisco and then Georgia, is even blonder than Heiberg, but more reserved in manner.

The pair travel frequently and fell in love with the Côte d’Azur, which they’ve regularly visited since the early years of their relationship, originally because they had a mutual friend in Haut de Cagnes, which has long been popular with Scandinavian snowbirds—not to mention legendary artists like Renoir, Modigliani, and Soutine. (Heiberg is notoriously not a fan of the cold, despite his Nordic heritage. “The farthest north I’ll live in Europe is the South of France,” he exclaims.) Heiberg praises Haut de Cagnes for its down-to-earth, historic charm, similar to that of neighboring villages like St. Paul de Vence, but without the throngs of tourists. “It’s rustic—not a large town,” he says. “There are few cars, narrow cobblestone streets, lots of artists, and great restaurants—it has a truly old-fashioned character that’s hard to find in the region.”

Two years ago, Heiberg’s mother passed away, and shortly after, he spent a lot of time in Oslo, with Cummings, settling her estate. While there, he got a call from a friend in Haut de Cagnes, who noted that a home was newly on the market. He jumped at the opportunity. “I immediately knew the house he was talking about,” says Heiberg, who made a few phone calls and bought it within days, without ever having seen the interior.

A slender, three-level sliver of a house that dates from around 1530 and measures fewer than 1,000 square feet, it overlooks the Mediterranean, with Cap d’Antibes visible in the distance, from the top floor. But it needed work. “It was livable, though it had to be upgraded,” says Heiberg. “We didn’t want it to look like the typical Provençal house, but tried to make it appear more Continental instead.” In due course the house was “scraped down to the bones,” a process that took six months, including redoing the Venetian plaster walls and darkening and waxing the original beams. (The latter play nicely against Heiberg’s mother’s antique furniture.) “What was most important for Bill and me is that it would remain a breath of the past, of history.”

Despite the teeny rooms and low ceilings, there’s abundant seating, including a little cove with an armchair for Cummings (“Bill’s only stipulation was that he would have a quiet place to sit and read,” says Heiberg). Along with Norwegian and French antiques, they have integrated some of their own discoveries, like a series of works inspired by a trip to Egypt, hung high to make the diminutive space look loftier.

Though comfortably furnished, the house is anything but crowded. “Some people think decorating means you have to cover every surface you can with an object, just for its own sake,” says Cummings. “But when you do that, you lose touch with any historical reflection, as well as any sense of the personality or lifestyle of the people who live in a space. We wanted our home to reflect the past, as well as how we live now. We wanted it to be a living memory, instead of a stone monument.”

One of Heiberg’s favorite pieces is a fitting case in point: a large corner cabinet that most recently sat in his mother’s house, but originally belonged to his great-grandparents, who lived most of their lives in Barcelona. On the backside of the cabinet is a roster of all the places it had been shipped to before and since their return to Norway in the early 1900s—“including, just recently, being shipped back to Nice, France,” says Heiberg. “Now it’s looking over the Mediterranean once again.”