Every city exists in nature. "It's that simple," says Janice Parker. "You just clear the trash out, then good things start to happen." 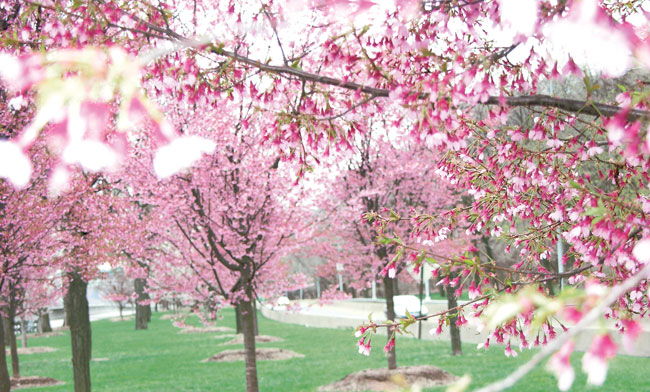 Janice Parker knows what she’s talking about. Ten years ago,
the Connecticut landscape designer had the notion to“fix” a grove of dying cherry trees along Manhattan’s blighted West Side. Working with her friend, the actress Bette Midler and Bette’s dynamic New York Restoration Project (NYRP), Janice oversaw the planting of hundreds of trees along the Harlem and Hudson riverways, replacing the dying monoculture with a mix of hardy pink and white cherries and crabapples. The very first year after planting, the trees were “stunning,” she says. “Give nature a little respect and it gives back to you 1,000 times. Cities are built by filling, grading, flattening, paving—it’s horrifying to watch. But the ills of the city, even problems with storm-water drainage, can all disappear once you beautify the landscape.” 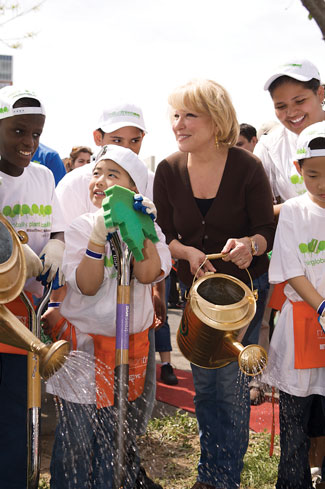 “To beautify” is the essence of the New York Restoration Project, a 15-year-old nonprofit dedicated to cleaning up Manhattan. The group’s founder, inspiration and visionary kick-in-the-pants is Bette Midler, the divine Miss M. One day, more than 15 years ago, tired of the trash she saw strewn along the highway, Bette simply stopped her car and started cleaning up. Neighborhood volunteers joined in, and today that group has grown into a positive, citywide force for change.

Amy Garvis, senior advisor to the project since 1995, was there at the beginning. “We were an upstart group.” Bette questioned why some areas of the city were so ill-kept when others were well-maintained, then set out to right the balance. “We always planned to spread our work throughout the city,” Amy says. But a single event—buying 114 about-to-be auctioned-off, New York City-owned community gardens, bumped the proposed idea into reality. Today NYRP cleans up parks, plants trees, maintains community gardens, runs a training program for young adults, and works with New York City schoolteachers to incorporate arbor education into the curriculum. The group’s ultimate goal is to make the city a cooler, greener, healthier, happier, more all-around beautiful place to call home.

A major next step, MillionTreesNYC, was launched in 2007 by NYRP founder Bette Midler and Mayor Michael R. Bloomberg.

“The Cherry Tree Project that we began in 2006 was really the inspiration for MillionTreesNYC,” says Bette. “We’ve planted almost 600 gorgeous flowering trees along the Harlem and Hudson rivers in northern Manhattan. Close your eyes and imagine the beauty of these exquisite trees blooming every spring in New York City. Divine!

“Then I thought, why stop there? So we partnered with the mayor to plant one million new trees of all varieties everywhere in the city. I’m thrilled that we are almost halfway to our goal and welcome any additional support in helping us get the job done by 2017.”

The 500,000th tree will be planted this spring, a full year ahead of schedule.

In recent years, NYRP has grown and matured, partnering with businesses and other nonprofits to become a sustainable force for good in the city. While reflecting Bette’s vision and values, the organization is preparing for whatever comes next. Last October, Amy Freitag, formerly with the Bloomberg administration’s Department of Parks & Recreation, stepped in as executive director to help guide the organization toward a future when it can stand completely on its own. 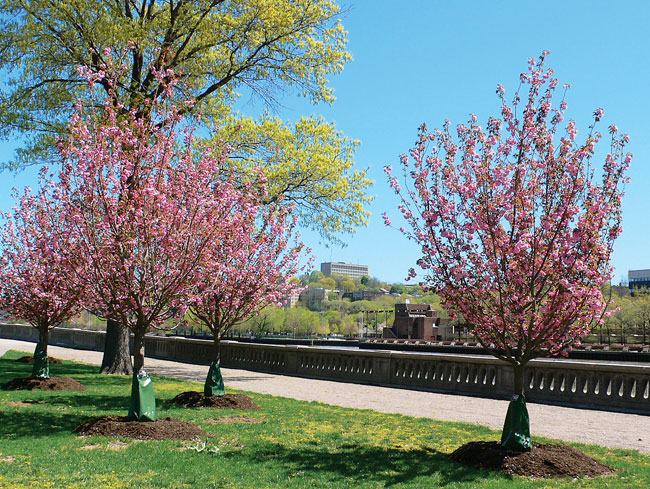 Meanwhile NYRP keeps growing. This month, it will sponsor a conference in Washington, D.C., called “Vibrant Cities and Urban Forests: A National Call to Action,” an initiative with the United States Department of Agriculture (USDA) Forest Service. It’s clear that NYRP has a divine pattern for sustainability, one that other communities might like to follow.