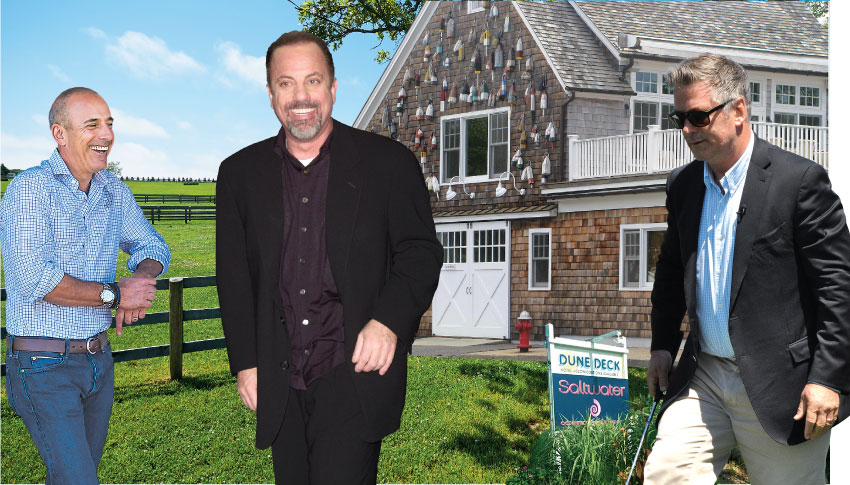 Sag Harbor big shot Billy Joel doesn’t love his quirky, two-story late-18th-century house on Bay Street just the way it is. But he’s keeping the faith that the village’s Architectural Review Board will let him pick up the oddly angled house and reorient it, joining it with a warehouse structure that he’s using to store his motorcycle collection. The six-time Grammy winner has tapped builder Jeffrey Collé for the re-do, which calls for switching up the foundation of the 1,171-square-foot residence in order to connect it to the newer 1,960-square-foot commercial space next door. If approved, Joel’s digs will look out toward the water and Sag Harbor Yacht Club, where the singer’s 36-foot cruiser, Alexa,is frequently anchored.

Frequent SNL host Alec Baldwin has no intentions to sell his home in Amagansett, but that doesn’t mean he doesn’t have anything to say about real estate. The actor and activist is trying to kill the Hills, Discovery Land Company’s proposed resort and housing development and 18-hole golf course in East Quogue. In January, Baldwin recorded a two-minute PSA for the Long Island Pine Barrens Society, condemning the planned development district (PDD) and others like it, which are banned in East Hampton Town but not in Southampton. The 500-acre swath is the largest privately owned Pine Barrens parcel left on Long Island.

Even nice guy Matt Lauer has been ruffling the feathers of fellow Hamptonites. The Today co-host submitted plans to plant border screening around the northern boundary of his Bright Side Farm in Water Mill, claiming that noise from ongoing construction on neighboring Farrell Court was spooking Bright Side’s horses. The gentleman farmer petitioned to plant 17 trees and 131 shrubs, but the owners of the adjacent property, Jack and Jodi Wasserman, argued that the proposed landscaping would obstruct their view of the farm. In mid-April, Lauer was given the go-ahead to plant the shrubs, but none of the trees, which were deemed too tall. The fight for talk-show ratings has nothing on this one.