Boscobel, an 1805 Beauty Overlooking the Hudson River, Is More Resplendent Than Ever During This Special Time of Year 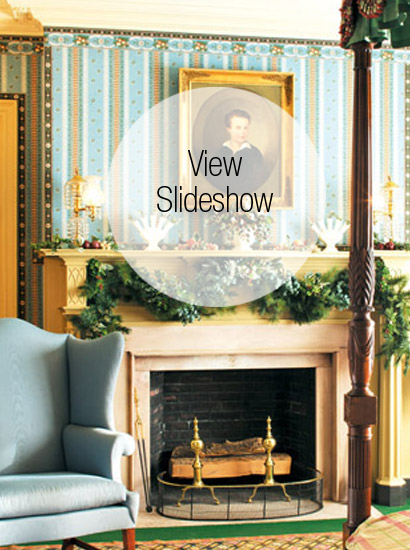 It’s hard to believe it was almost a teardown. “Boscobel, an early architectural treasure in the Hudson River Valley, is ready for the scrap heap,” read a May 12, 1955, article in The New York Times. The Federal-era jewel had been languishing since 1923, when Westchester County bought the circa-1805 house and land, in the riverside hamlet of Montrose, with the intention of creating a park. But it remained vacant and began to slide into decay, and in 1941, the county’s parks department decided to raze it. A local citizens’ group formed Boscobel, Inc., in an attempt to save the structure, and in 1945 the Veterans Administration bought the dilapidated mansion and built a giant hospital complex around it. Less than a decade later, though, the V.A. deemed it surplus, and it was slated for demolition once again. “The V.A.,” says Steven Miller, the executive director of Boscobel House and Gardens, “is not in the historic preservation business.”

The house was sold to a wrecker for $35. Important pieces of the front façade, as well as architectural details inside and out, were trucked off to Locust Valley, to be used in the construction of a new house. Things looked bleak.

Seeing the stripped structure, another citizens’ group, led by Benjamin West Frazier, the president of neighboring Putnam County’s historic society, formed Boscobel Restoration, Inc. (BRI), raising $10,000 to stop the demolition and acquire what remained of the building—even threatening to have the New York State Police on hand if the wrecker came near. “It was a last-minute save,” Miller says. The house was disassembled and numbered, with various pieces stored in nearby barns, sheds, ice houses, and even an uninhabited castle, until a suitable new location could be found for it.

Boscobel was the dream of States Morris Dyckman, a British loyalist and former British Army supply officer from an old New Amsterdam family. After making his fortune in England (where he visited Boscobel Manor, in Shropshire), he returned to America to build a retreat on his 250-acre Montrose farm. The architect of the Palladian-style, Robert Adam–influenced villa is unknown, and the only existing plan for the house is a drawing on the back of a grocery bill from 1804, when construction began. Two years later, with just the foundation built, Dyckman died. His widow, Elizabeth, took over and finished the project by 1808, furnishing it lavishly and moving in with her son. Boscobel remained in the family until 1888, then went through several owners before beginning its prolonged battle between life and death.

“This is ultimately the story of two women,” says Miller. “Elizabeth Dyckman, who finished construction and ran the property for years, and Lila Acheson Wallace, co-founder of Reader’s Digest.” In 1956, Wallace jump-started Boscobel’s future with a then-anonymous donation of $50,000, which BRI used to snap up 16 acres in Garrison, the home’s current site, on a promontory overlooking the narrowest navigable point in the Hudson. (During the Revolutionary War, American rebels installed a 100-ton floating chain across the water to thwart British ships; Boscobel has a few of the iron links on display.) The owner of the Locust Valley house graciously agreed to return the façade and other stripped pieces, which were transferred back Upstate on a flatbed truck.

For the next several years, Wallace masterminded the house’s restoration and the planning of its gardens, filling the interiors with period English furnishings and planting full-grown trees and an apple orchard. The docent uniforms were, at her behest, by Mainbocher. At the opening ceremony on May 21, 1961, Governor Nelson A. Rockefeller declared Boscobel, its distinctive swagged and columned façade revitalized to its full glory, “one of the most beautiful homes ever built in America.”

In the mid-1970s, an original inventory of the house from 1806 was found, proving that the furnishings hadn’t originally been English, but rather pieces made by New York City artisans, such as Duncan Phyfe. Undeterred, Wallace consulted with furniture experts (including Berry B. Tracy, curator-in-charge of the American Wing at the Metropolitan Museum of Art) to redecorate with period designs by Federal-era American furniture makers. Other than a spiff-up of the front entry this past winter, Boscobel looks much the same today.

If Dyckman had lived longer, Boscobel would have cemented his status as a country gentleman. “In 1805, it was all about being rich and showing off,” Miller says. From a distance, the home’s wooden exterior looks like more expensive stone, while the oversize windows suggest that the owner was wealthy enough to heat lofty, large rooms. Beautifully designed, with exquisitely symmetric proportions and Greek and Roman Revival details, the house turns its back to the road, since most people during its heyday would have arrived by water, “which was like the interstate of the time,” Miller adds.

And then there’s the view. It, too, narrowly escaped extinction. In 1963, Con Edison proposed to blast away a side of Storm King Mountain to build a hydroelectric plant across the river, which galvanized a group of residents to found the organization that eventually grew into the nonprofit now known as Scenic Hudson. In a landmark 1965 decision, the Second Circuit U.S. Court of Appeals granted them the right to sue based on aesthetic and environmental factors, rather than financial interests, paving the way for future conservation gains across the country. “They fought a wonderful battle to preserve this vista, one of the best views in the country,” Miller says. “If I could steal a slogan, Boscobel’s would be, ‘Got beauty?’”

In winter, Boscobel is perhaps at its most fetching, particularly during the holidays, when it’s festooned with early-19th-century decorations. Winter greenery, red berries, boxwood, a kissing ball, mistletoe, and holly fill the entire house (but no Christmas trees, a tradition that dates from later, Victorian times). “With limited light and heat in the winter, entertainment was centered around the fireplaces,” says Lisa DiMarzo, Boscobel’s museum educator. “Guests in a house such as Boscobel would have enjoyed the music, dancing quadrilles and admiring decorations by the glow of candles.” Treats included fanciful pyramids of sweets, apple pies, wassail, and Twelfth Night cake, replicated today on tables in the sitting and dining rooms.

Boscobel is much more than a beautifully preserved relic from America’s past, however. Sure, you can take a house tour, but you can also do yoga on the lawn, dance to swing music, take your toddler to a play group, roast marshmallows on Family Bonfire Night, attend a lecture by a famed architect, or watch a play during the Hudson Valley Shakespeare Festival, in residence at Boscobel for the past 25 summers.

And always, you can take in the view. Across the river, the castle-like bulk of the U.S. Military Academy at West Point looms, and eagles and hawks soar above the water. Looking out from the belvedere toward the heavily forested and virtually untouched, swelled hills of the Hudson Highlands, it’s easy to imagine what Henry Hudson would have seen in 1609, as he floated upriver on the Half Moon.

A version of this article appeared in the December 2014 issue of New York & Cottages & Gardens with the headline: Hudson Valley Holiday.