British Style in a Greenwich Garden

A backcountry estate inspired by landscape design in the United Kingdom. 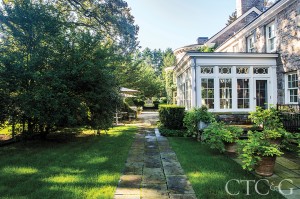 After studying landscape design in London, Lindsay Burn returned to the States with a heightened understanding of the disparate approaches to gardening on both sides of the pond. “Here, everything has to be clipped and perfect, but in England they embrace when something has turned to brown as much as when things are blooming,” explains Burn. “I learned to admire the British acceptance of a plant’s cycle of life and wanted to do similar things here.”

As luck would have it, the perfect project for enacting her newfound philosophy presented itself when a couple (he’s British and she’s American ) that she met during her tenure abroad moved back to the States and asked her to be part of the extensive renovation of their Greenwich property. Seeking a blend of parklike elements, defined perennial borders and wildflower meadows, the duo turned to Burn to reshape the property surrounding their 1940s backcountry estate. “A mix of loose and formal speaks to the way they live,” Burn notes.

The homeowners also supported her ideas about allowing plants to follow their natural course, which meant letting seed heads be after the blossoms were done. Besides adding interest in autumn and winter, the plan would create food for wildlife in the colder months. “Attracting birds, bees and butterflies was one of our goals,” she adds.

But first a myriad of structural and design problems on the main house needed to be addressed, and architect Charles Hilton did more than his fair share to remedy them. A new roof plus updated windows and doors were among the necessary fixes to the existing structure, followed by a breakfast room addition and replacement of all the glass on the freestanding conservatory located behind the house. Dating to the 1920s, the latter is the ideal site for garden parties and immediately adjacent to a new enclosed cutting garden where tulips, dahlias and the like provide blooms for generous floral arrangements throughout the interiors.

During the demanding renovation, which mandated the removal of considerable amounts of existing plant material, the design team worked to save an existing beech tree that emerged as the sculptural focal point of the entry. “Everything circulates around that majestic jewel,” says the landscape designer, who introduced a series of rounded boxwoods in scale with the tree. Thanks to lighting designer Nathan Orsman, come evening, filtered light casts a moonlike glow that creates an enchanting tableau. “On a snowy night it is just magical,” Burn adds.

From there, attention turned to the main lawn. Accessed through a simple white gate, the expanse of green is delineated by border gardens brimming with a mindful mix of shrubs, grasses and perennials selected to provide a color show throughout the seasons. “In keeping with British tradition, the borders have great height,” says Burn, who used evergreens to accomplish that effect. “Come winter, snow holds onto these structural elements adding to the beauty.” 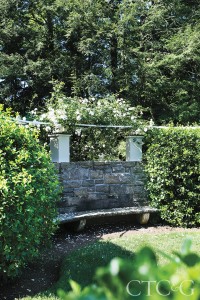 Prior to leaving this more formal section of the property a stone bench set amidst an overflow of rambling English roses catches the eye and indicates things are about to change. A lily pond signals an exit through the profusion of coneflower, verbena, daylilies and hydrangea, and an archway opens to a meandering pathway that leads to a wildflower meadow. “The formal elements closer to the home are in contrast with the informality of the wildflower garden,” the landscape designer explains. “There are three meadows of native pollinators, and they are all filled with the music of the wind, bees and birds.”

Throughout, Burn never lost sight of the architecture—selecting stone colors for pathways and outdoor areas in keeping with the main structure. “Having a repetition of color is essential, so the eye sees everything as a whole rather than lots of smaller pieces,” she notes. “We also made sure to maintain a scale outside that was in keeping with the grandeur of the home.”

The print version of this article appeared with the headline: Crowning Glory.

Advice for the Invention of Your Outdoor Oasis