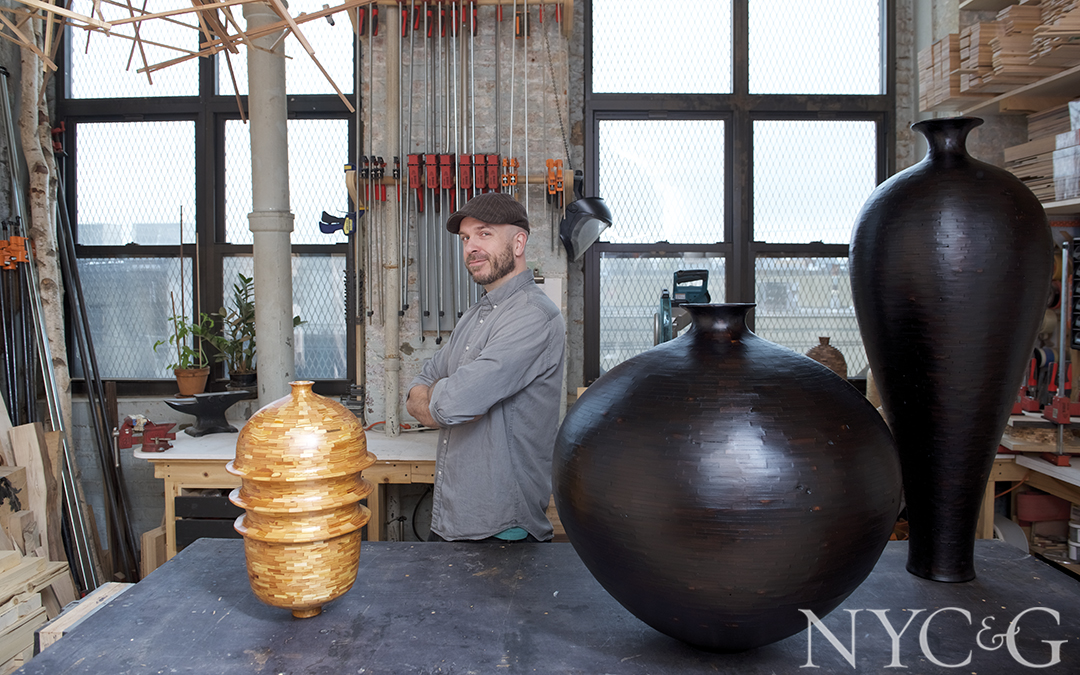 The saying “one man’s trash is another man’s treasure” couldn’t be truer in the case of woodworker Richard Haining, who makes sculptural vessels, light fixtures, and table bases out of discarded wood that he salvages from water towers, lumberyards, and New York City dumpsters. “People typically get rid of their scrap wood, but just because a material has been thrown away, it doesn’t mean it’s unusable,” says the Greenpoint-based craftsman, an Atlanta native who earned a degree in furniture design from the Rhode Island School of Design in 2005. “It just requires more consideration.” 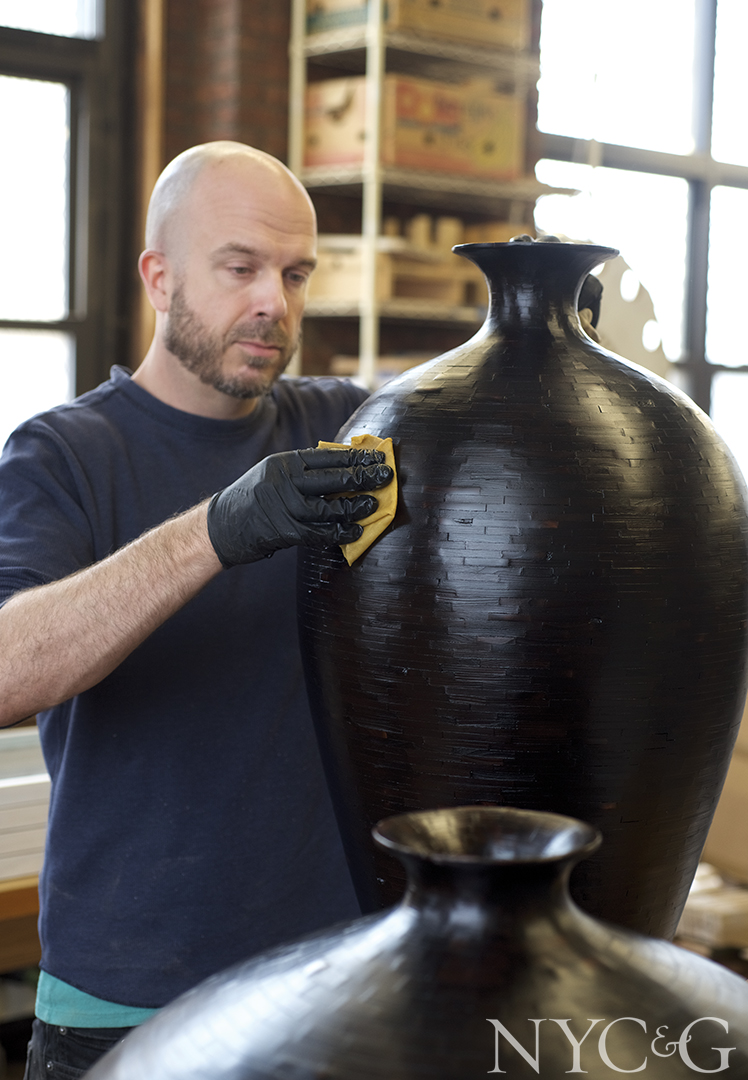 Haining stumbled on his passion in 2007 while working for a Brooklyn-based set design company, where he “started playing around with fragments of plywood from deconstructed sets.” Inspired by fieldstone walls, he began experimenting with cutting strips of wood into Lego-sized pieces and then stacking them to form objects (some sinuous and smooth, and others more structured, with a jagged surface). “Using little building blocks gives me the flexibility to make nearly anything,” explains Haining, “whether it’s small enough to fit in the palm of my hand or large enough to fill an entire room.” In 2014, he quit his job to pursue his hobby full-time.

In Haining’s 350-square-foot studio, piles of wood—ranging from walnut and maple to Alaskan cedar and California redwood—line the walls, alongside life-size sketches of in-progress products that he uses for reference as he works. To begin a vessel, he selects a wood species and cuts up a handful of boards into tiny chunks. He bonds five veneer discs together to form the base, and then arranges a ring of wooden pieces around the perimeter, proceeding to stack them and coating each layer with glue (a small vessel typically comprises 1,000 pieces, with 25 per ring). 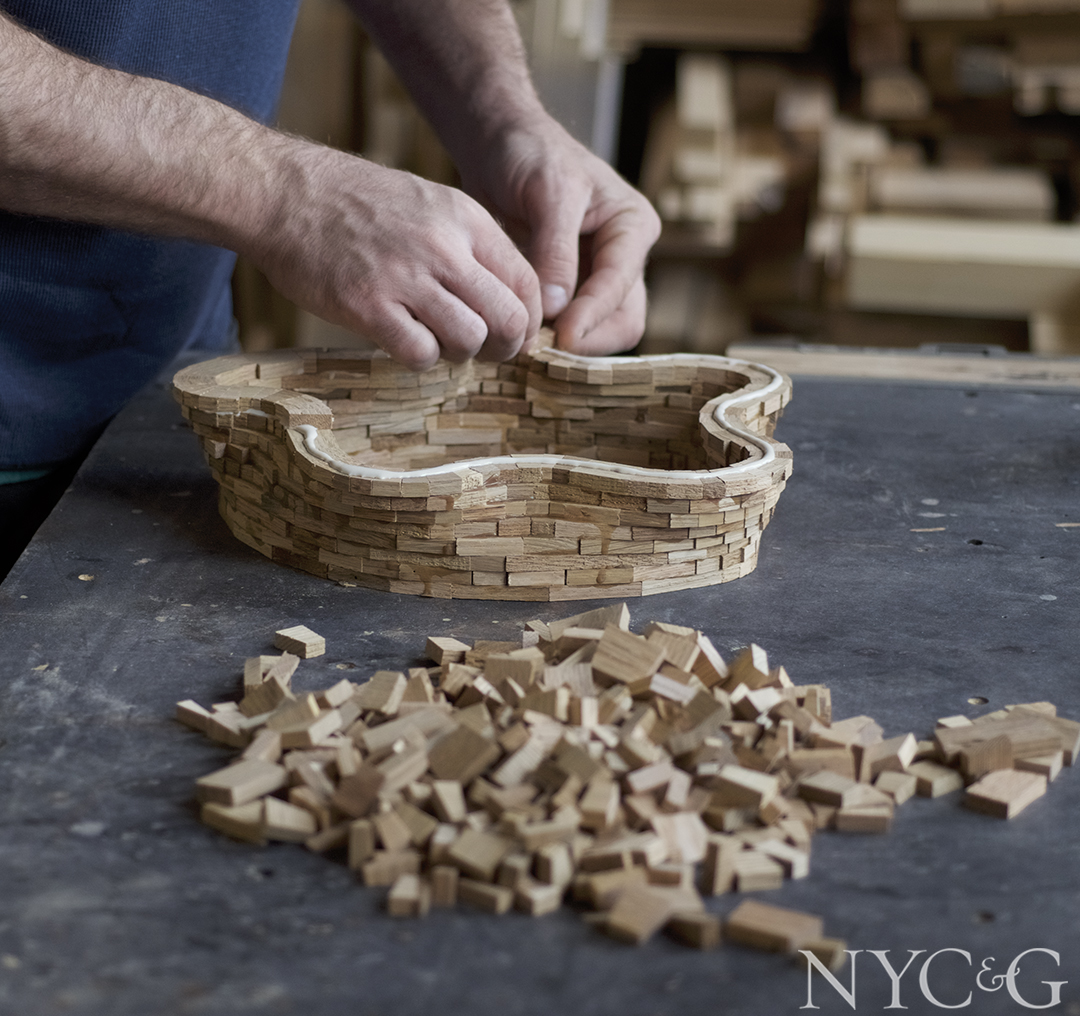 After obtaining a satisfying height and shape, Haining uses an electric hand grinder to round the hard edges and further define the form. (At this point, he sometimes chooses to torch the wood—a Japanese technique known as shou sugi ban—to give it a black cast.) He then sands the surface and coats it with both a clear liquid finish and beeswax. “It’s really gratifying,” says Haining, “to take a material that’s considered waste and turn it into something much greater.”

A version of this article appeared in the May/June 2019 issue of NYC&G (New York Cottages & Gardens) with the headline: Building Blocks.