Tillett is the mastermind behind the part art installation, part illuminated map that is This Way, a series of fiber optics and glass light bulbs that hang near the pedestrian entrance to the Brooklyn Bridge on the eastern side.

Light The Way Linnaea Tillett outside the Brooklyn Navy Yard, where she installed serene, intimate lighting in the courtyard entryway to the new visitor center. photographs by doug young


Ask designers what a room’s most important element is, and most will say lighting. It can make or break a project, a fact no one knows more than lighting designer Linnaea Tillett. Based in Williamsburg, Tillett is the mastermind behind the part art installation, part illuminated map that is This Way, a series of fiber optics and glass light bulbs that hang near the pedestrian entrance to the Brooklyn Bridge on the eastern (Dumbo) side.

“It was a really interesting challenge, as it was based around the idea of helping tourists find their way to the bridge or help them get to Grimaldi’s pizza, but more important, it’s for the residents,” says Tillett, who completed the project after winning a competition focused on art as a vehicle for communication. “With this piece, locals don’t have to explain the way every time someone asks. Now they can just say, ‘Follow the light,’ which was my intention.”

Choosing materials for the job came easily to Tillett, who has also created the lighting for the FDR Four Freedoms Park on Roosevelt Island, the Brooklyn Navy Yard, and Grace Church in Brooklyn Heights, currently undergoing a renovation and restoration. With most of Tillett Lighting Design’s projects, a series of tests are conducted, one of which entails measuring the foot candles, or how much light comes from a single bulb. “Imagine a box that’s one foot on each side and has a candle in the center of it,” explains Tillett. “The amount of light emitted from 12 inches away is one foot candle.” 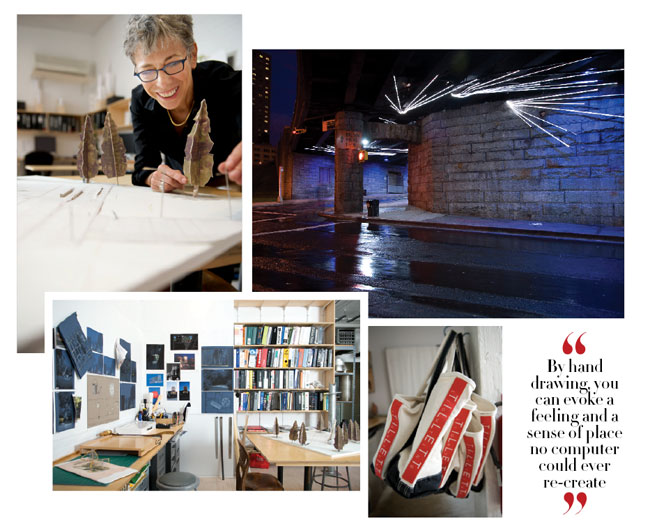 Linnaea’s Kingdom Tillett Lighting Design’s home base is a studio in Williamsburg (near right and above), where Tillett works on a scale model of an outdoor lighting project (top left). This Way (top right) illuminates the approach to the pedestrian entry to the Brooklyn Bridge. photographs by DOUG YOUNG; top right: seth ely/courtesy of tillett lighting design inc.

Next comes determining the more technical elements, such as the types of bulbs to be used and how often they will be changed. For This Way, Tillett chose low-maintenance fiber-optic bulbs, which need to be changed every three to five years.

“Our computer programs do all the modeling and calculating,” says Tillett, whose team of six concentrates on the design work, light calculating, engineering, and aesthetic components of each project. But only so much can be accomplished on the computer. During the design phase, her co-workers always draw everything by hand. “You can’t describe lighting or reproduce it accurately, but by hand drawing, you can evoke a feeling, a sense of place, and a certain mystery no computer could ever re-create,” she says. “It’s only with a pencil that you can understand everything completely.”