The Champagne scene on the East End positively sparkles. 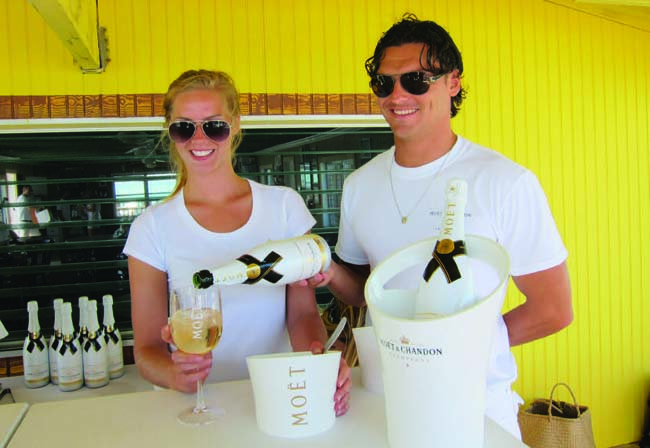 On the Rocks | At the Moët Ice Imperial international launch in Miami, staff poured the new “species” of citrusy Champagne over ice in large goblets..

Nicolas Feuillatte, a mere infant in the Champagne world (the brand is just 35 years old, whereas Perrier-Jouët just celebrated its 200th anniversary), is France’s number-one-selling bubbly. The exclusive Champagne sponsor of the James Beard Foundation’s Chefs and Champagne dinner, held in July at the Wölffer Estate in Sagaponack, it has become a summertime favorite across the East End and will also be poured between screenings at the Hamptons Film Festival this fall.

I first became aware of Nicolas Feuillatte— both the man and the brand—when tasting the exceptional fresh strawberry flavor of the lovely Brut Rosé NV. Along with the stellar rosé, I have been smitten with N.F.’s cuvée de prestige, Palmes D’Or—which, legend has it, M. Feuillatte created for an opera diva who was as rare and elusive to him as Tahitian black pearls, not coincidentally the motif on the bottle. The octogenarian Feuillatte, who has kept homes on several continents and hobnobbed with various Kennedys, Aristotle Onassis and Yves Saint Laurent, no longer owns the eponymous brand, having sold it in 1986 to Champagne’s biggest cooperative of wine growers. The cooperative released 8 million bottles last year, placing Nicolas Feuillatte in the top five houses worldwide.

The world’s leading brand, Moët et Chandon, has just debuted a new “species” of Champagne that will revolutionize the way we drink bubbly. The specially blended Moët Ice Imperial is intended to be served with ice cubes and consumed like a cocktail with garnishes (mint, raspberries or lime) in large goblets, not flutes—preferably around a swimming pool. Winemaker Benoît Gouez considered ice as a component of the drink and structured the cuvée so that its citrusy flavor is accentuated as the ice melts.

The idea originated on the French Riviera, which popularized the ubiquitous Champagne piscine (Brut Champagne served poolside, in an ice bucket with big glasses). Ice Imperial, however, is poured from a stunning white bottle (and an expensive one at that, at 125 euro). Navy Beach in Montauk has held a number of elaborate launch parties on its sandy beach, where a bottle is a steal at $95.

Though Champagne comes from only one A.O.C. of France, wineries on Long Island are making excellent sparkling wines in méthode Champenoise. Sparkling Pointe leads the charge. I especially like French-born winemaker Gilles Martin’s ’08 Topaz Imperial ($33), a brut rosé, not to mention the ’07 Brut ($29) and the extra-dry ’07 Cuvée Carnaval ($24). Brut Seduction ’01 ($50) won double gold at the San Francisco wine competition.