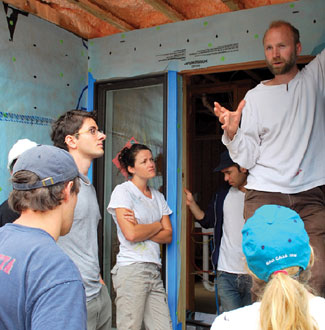 For more than 40 years, Yale’s School of Architecture has challenged its first-year students to design and build a structure as part of its Vlock Building Project. Each spring, students compete in teams of 10 to design buildings that serve the community. Then they work together as a class to construct the winning plan over the summer. Yale is partnering with Neighborhood Housing Services of New Haven, a nonprofit organization whose mission is to end homelessness by building affordable housing. And this year, the project received 100 percent of the proceeds from Connecticut Cottages & Gardens’ and Westchester Cottages & Gardens’ Innovation in Design Awards raffle.

“We deal with an underserved constituency and expose students to another reality.  So it’s important from a social aspect,” says Yale Professor of Architecture and Building Project director Adam Hopfner, who participated in the program as a student in the ’90s.

Students were asked to create a low-income single-family home with a tenant unit. The students wanted to create a space that was both intimate and luxurious within the constraints of a small building footprint. Each team developed a plan with a different theme focus—adaptability, minimal, technology, urban morphology, nesting or envelope. “Minimal” was named the winner. Hopfner describes the plan as incredibly efficient. By using an innovative torqued roof, the students created a five-bedroom, three-bathroom, three-story house that fits into the context of the two-story houses surrounding it. 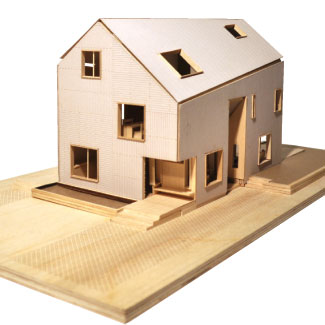 After working with Hopfner to fine-tune the design, the students broke ground in early May and will complete the project over the course of 15 weeks. Though many students have little or no hands-on experience, they
will complete every aspect of the building, from excavation and pouring concrete to framing, weatherproofing and roofing.

“Architecture has to be about making, it can’t be all theoretically based,” says Hopfner.

Ames agrees and is grateful for the valuable experience she is gaining from the project. “To be able to see those lines on paper manifest themselves in physical form, to actually build a wall with a nail gun and two-by-four—and then finally stand within the built space—is liberating and rewarding,” she says.

This article appears in the July 2011 issue of CTC&G (Connecticut Cottages & Gardens).