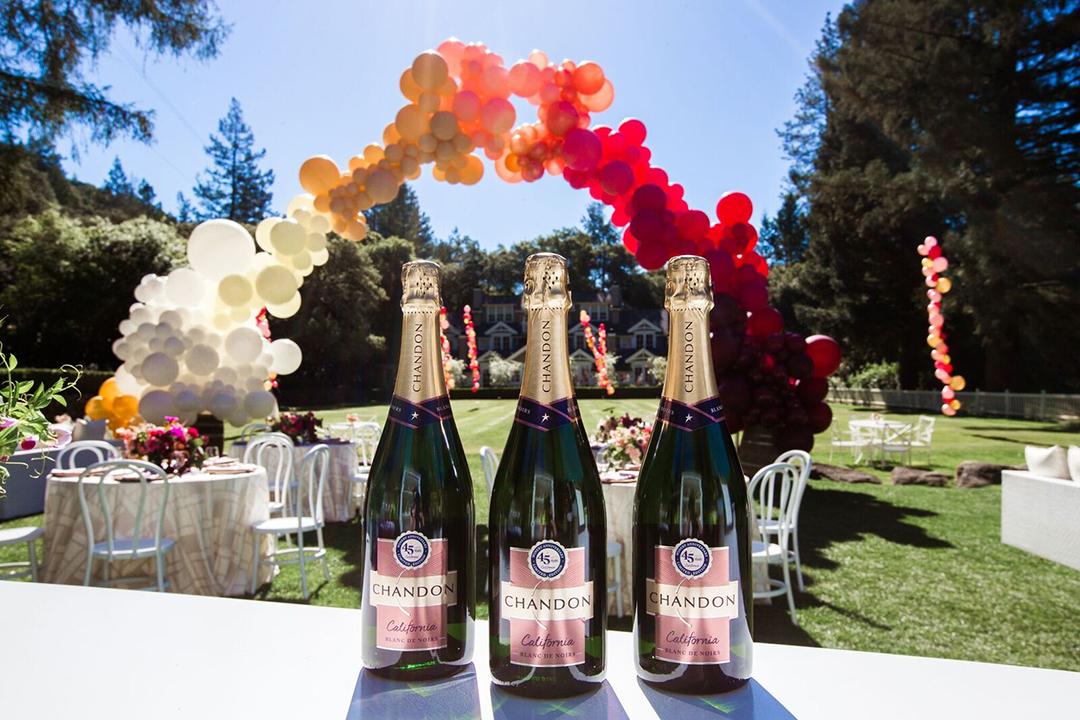 I had a surprising discovery on a recent trip to Napa for Domaine Chandon’s 45th anniversary. The blend of Chandon sparkling wine had changed dramatically. It was more French in style and had vivaciousness to the bubbles. This “French-touch” was thanks to 35-year-old winemaker, Pauline Lhote, who came to Chandon in Yountville as an intern and stayed for twelve years. Originally from the Champagne region of France, lovely Lhote was appointed chief winemaker in 2016 and I was tasting her very first vintage. 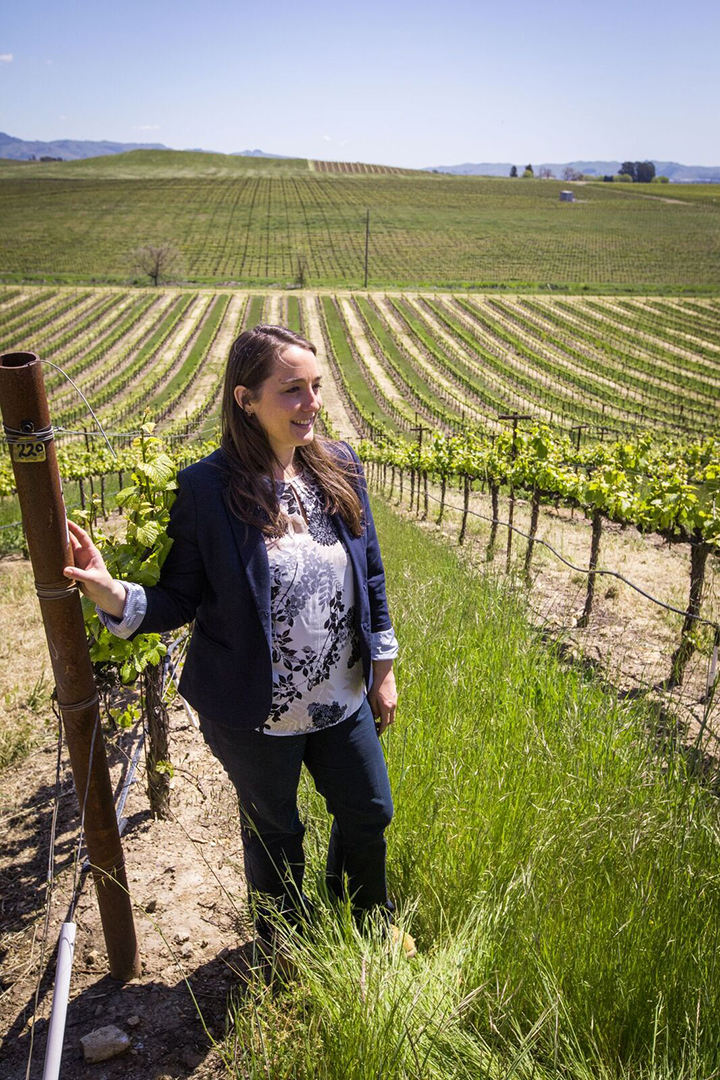 During a guided tasting conducted by Karen MacNeil, author of the seminal wine guide, The Wine Bible, we compared Chandon’s previous vintage of Blanc de Blancs, Blanc de Noirs, Brut and Rosé to Lhote’s first vintage as chief winemaker. Dressed in her usual salmon pink-hued dress to compliment her long red hair, Master Sommelier MacNeil started her presentation with a fascinating history of Napa in the early 1970’s. “The decade was considered the second Golden Age for Napa Valley. From 1970–1973 so many top wineries started: Joseph Phelps, Spotswood, Chateau Montelena, Silver Oak and Chandon,” she said, remembering those days nostalgically. “Truly a seminal period in Napa’s history. Consider that in the early 70’s land was $1,100 an acre and now vineyard land in Napa Valley goes for between $250,000–$500,000 an acre!” 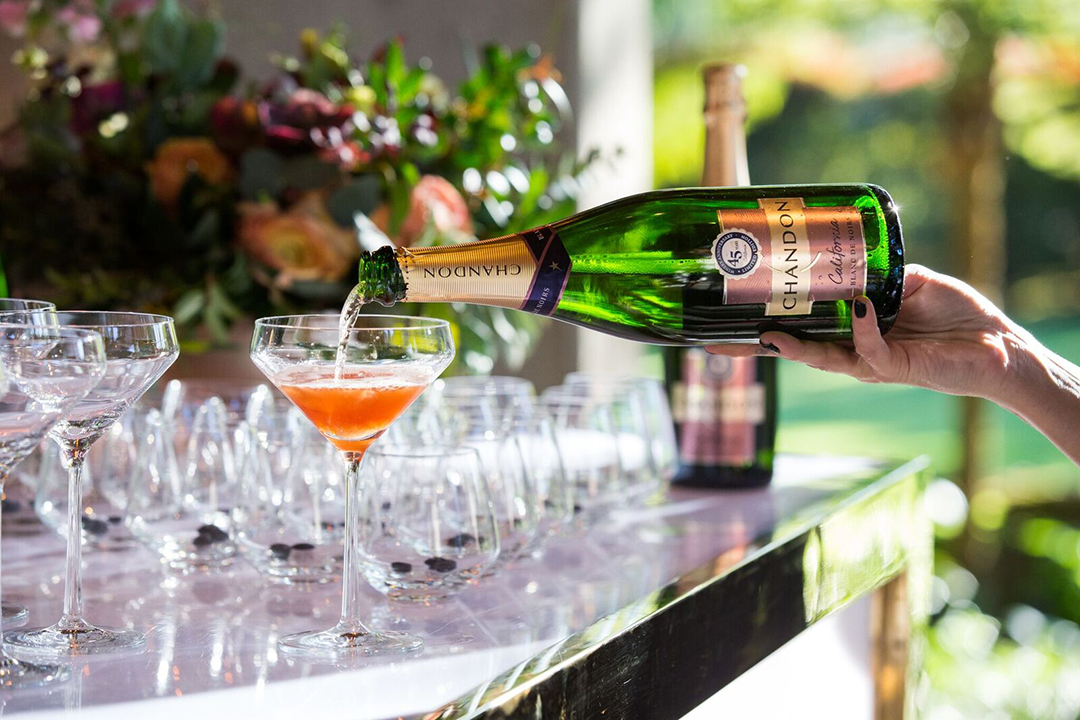 MacNeil explained that it was the famous Paris Tasting in 1976 that gave real confidence to the winemakers of Napa. At the Inter-Continental Hotel in Paris, the historic tasting pitted four white Burgundies against six California chardonnays. French judges were certain that the Burgundy would win and were aghast when it was Napa’s Chateau Montelena’s 1973 Chardonnay that was unveiled as the top wine. It put Napa on the map as a major quality wine region. It was hard to imagine that in 1970’s sophistication was not a word that one associated with the Napa viticulture community. When Domaine Chandon opened its French restaurant, L’Etoile, in the 70’s, it brought an infusion of French elegance to Napa. 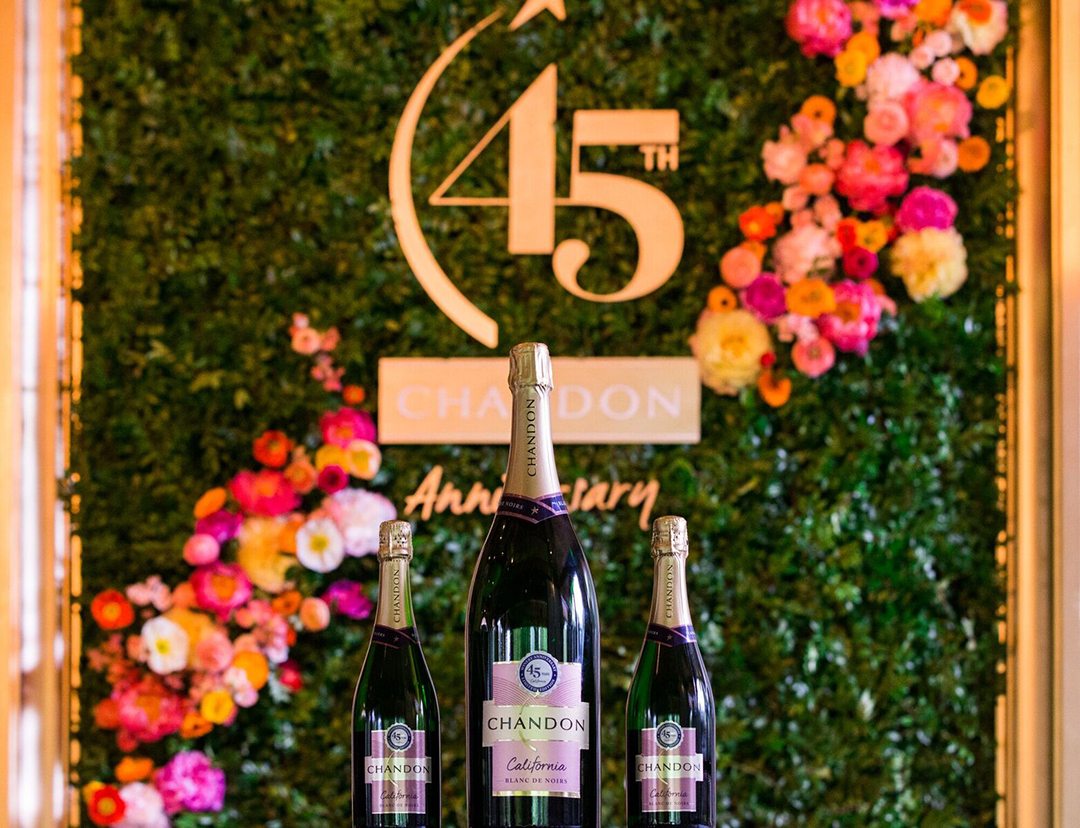 Having set the tone for the big anniversary, MacNeil reveled in how far the Chandon wines had come. She described Lhote’s new blend for her sparkling wines as “bright, fresh, round, lively with length in the palate and apple, pear, citrus flavors with a nice complexity.” One of the key’s to Lhote’s style is using less dosage (sugar added) in the blend making the bubbly more bright and fresh in the green-apple-pucker sense. At dinner, Lhote spoke to me in depth about what she was trying to achieve. “Purity of expression from the grapes. Elegance and balance. Aromatics and texture,” she emphasized. “You get richness from the Pinot Noir and aromatics from the Chardonnay.” Her mentors—Benoit Gouez, chief winemaker at Moet & Chandon, and Richard Geoffroy, Chef de Cave at Dom Perignon—were remarkable tutors to her. I happen to know both legendary winemakers and they emphasize that Champagne is mostly about texture, the tension in the blend. That’s what Lhote was going after, a stronger tension and she achieve it. 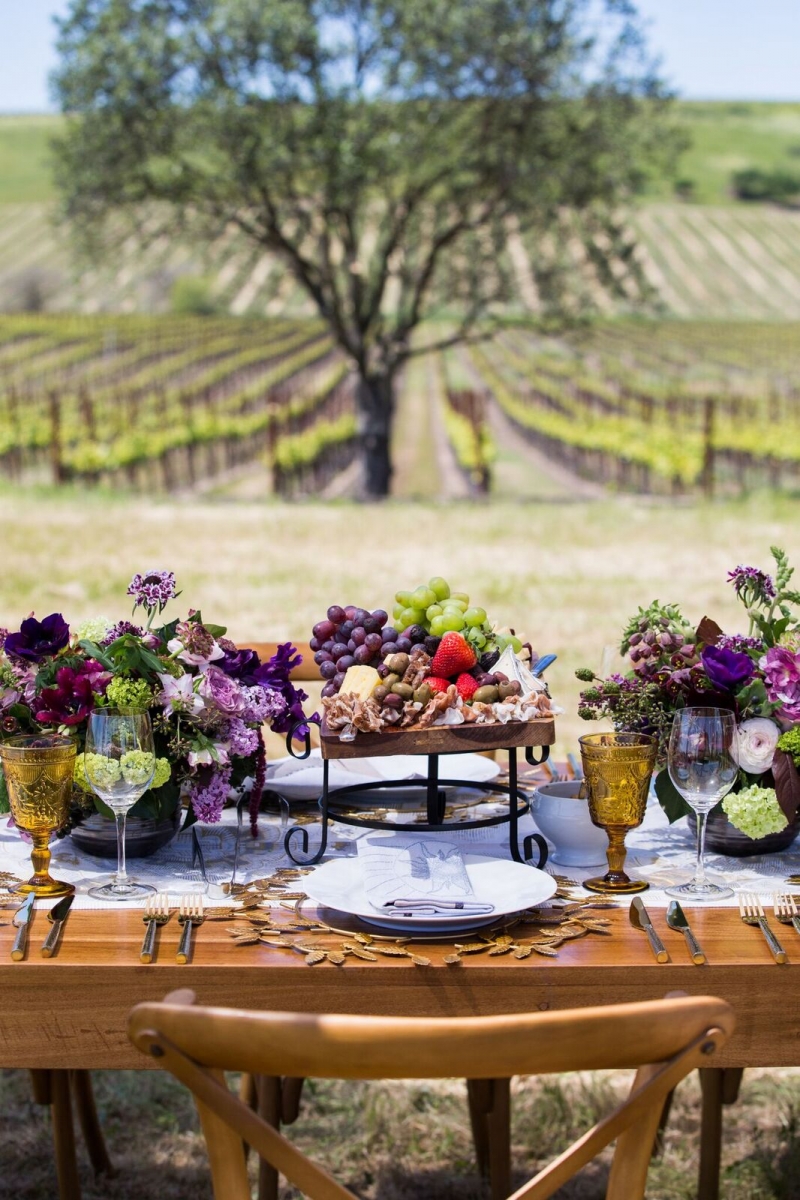 The anniversary party kicked off with a tour of the cool climate Carneros vineyards, the 1,000-acre sheep farm bordered by the Mayacamus Mountain range that Domaine Chandon acquired in 1973. Later Chandon purchased a vineyard in Mt. Veeder and another one in Yountville. All together with the Carneros property, Chandon owns a total of 1400 acres with 700 acres under vine. Shared by both Sonoma and Napa, Los Carneros AVA is the best region for growing Pinot Noir with its foggy mornings and constant cool breezes. Carlos, the viticulturist, explained that the vineyard had 22 different soil types and the area benefited from the cooling influence from San Francisco Bay.

I still envision myself sitting at a table festooned with floral arrangements set right in the middle of the vineyard on a bright sunny day with canopies blowing in the breeze. We drank flutes of the Chandon Blanc de Blancs sparkling and feasted on cheeses, charcuterie and grapes, followed by a full scrumptious lunch. The Chandon 45th anniversary festivities ended on a high note with an al fresco brunch at the Michelin-starred Meadowood. The Blanc de Noirs anniversary blend—which, at the tasting, MacNeil had declared “elegant and refined, showing what a woman winemaker brings to the table”—was poured out of magnums. The group all dressed in white was then instructed on how to play croquet and took over Meadowood’s four croquet courts. These are the highlights in the life of a wine writer.

IN OTHER NAPA NEWS

Pine Ridge Vineyards in Stags Leap District, renowned for its Cabernet Sauvignon, also has a major birthday this year: its 40th. I visited one of my favorite Napa winemakers, Michael Beaulac, who makes appellation collection wines from Pine Ridge’s estate vineyards in Stags Leap District, Oakville, Rutherford, Howell Mountain and Carneros. Beaulac gave me a private tasting at Cellar 47, a tasting salon built within the winery’s cave. I especially liked the Stags Leap Cabernet Sauvignon 2013 ($140) with its ripe black and red fruit and licorice notes. The tasting ending with Beaulac bring out his top of the line wine, Fortis, which is made in very limited edition from the top vineyard blocks of the estate. An impressive wine with structure, firm tannins and an endless finish. 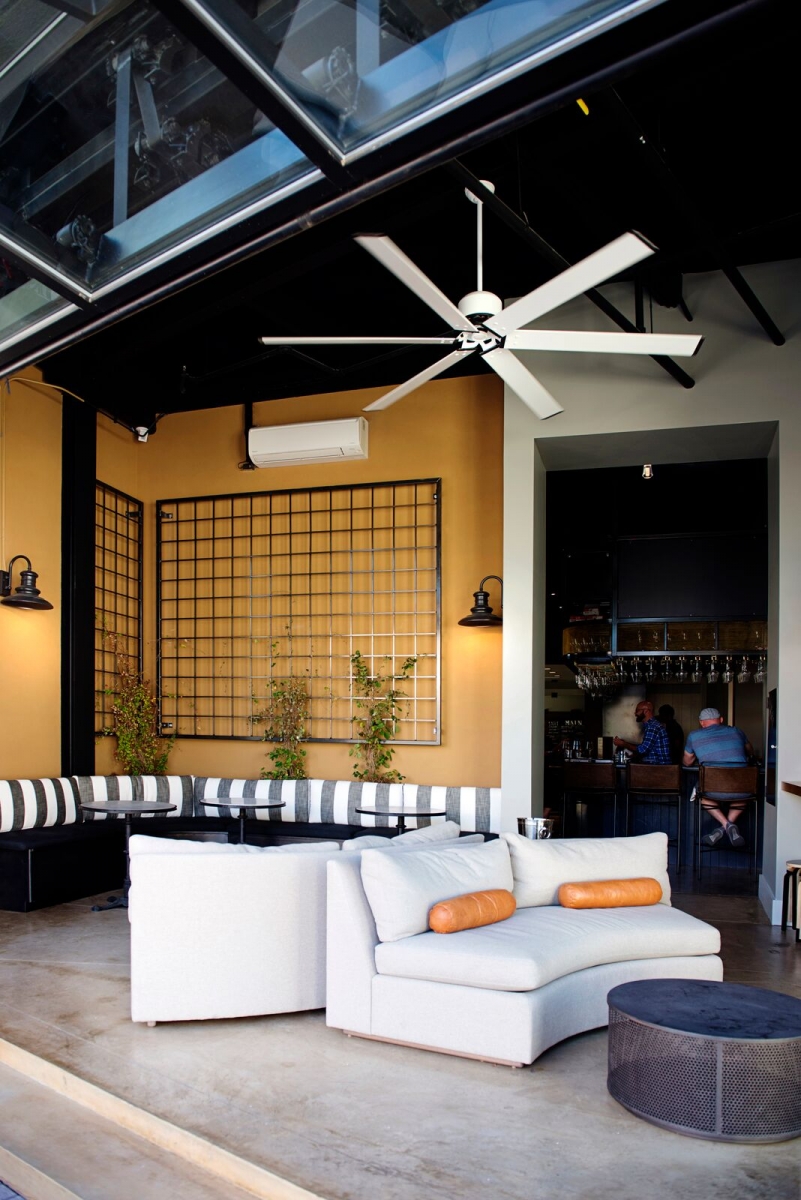 The town of Napa itself is buzzing and has a new huge rooftop terrace with a sweeping view atop the Archer Hotel. And nearby Compline, a combined wine bar, restaurant and wine retail shop. Compline just made Wine Enthusiast’s list of 100 of America’s best wine restaurants. Compline’s co-owners —Ryan Stetins, previously wine director for Charlie Trotter, and Master Sommelier Matt Stamp, who worked at the French Laundry—have put together an impressive world wine list, which attracts Napa’s locals and winemakers anxious to taste wines that are not from the region. Compline’s by-the-glass list has entries from France, Italy, Spain and Australia with just a few Napa selections. However, the by-the-bottle list is worldwide and under the heading “Napa & Nearby,” the list offers many local gems, which pair so well with the restaurant’s excellent cuisine like the unforgettable Sonoma duck.